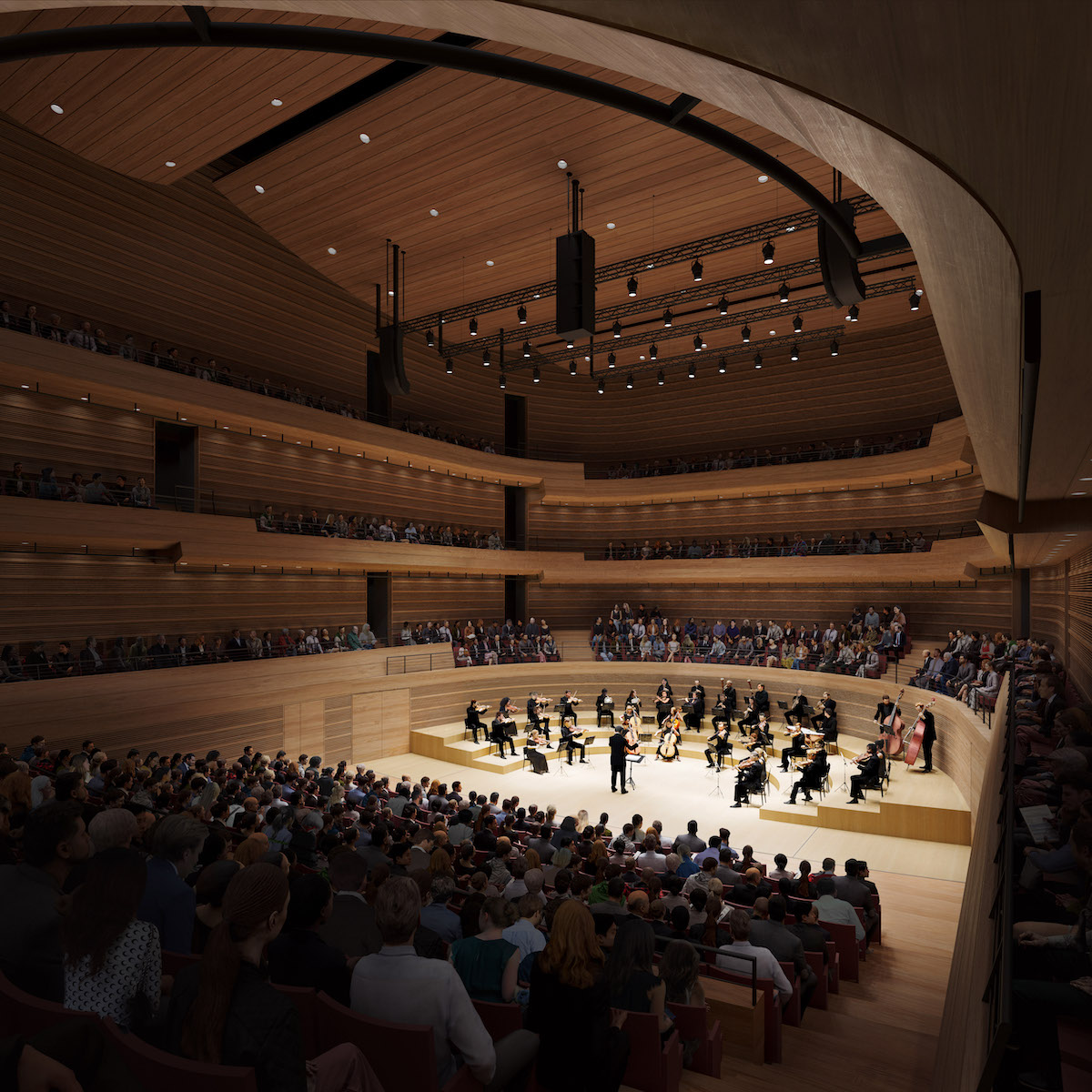 New designs have been released today of the proposed Dunard Centre in St Andrew Square. A variation to the planning application is being submitted this week, and if planning permission is granted by the council, construction will begin in 2022, with an estimated build length of three years.

The first purpose built music and performance venue planned for Edinburgh is designed by Sir David Chipperfield who went back to the drawing board to produce a different smaller design to accommodate objections over height and noise issues raised by St James Quarter. While some of the spaces have changed the price tag has increased from an initial £45 to £75 million.

Two thirds of this will be met by private philanthropy and fundraising. £35 million is being donated by Dunard Fund, and a fundraising campaign for a further £15 million has already received significant pledges. As part of the Edinburgh and South East Scotland City Region Deal the UK and Scottish Governments are each providing £10 million, and The City of Edinburgh Council £5 million.

This new building which will have a 1000 capacity auditorium with capacity for live streaming and broadcasting along with education spaces and a café/bar with indoor and outdoor seating, will be partly paid for by the Edinburgh and South East Scotland Region Deal

Fergus Linehan said: “We are delighted to unveil the stunning design for the Dunard Centre which will be a truly transformational venue in the heart of Edinburgh.

“The restrictions throughout the pandemic have highlighted the enormous contribution participating in the performing arts, whether as an audience member or a performer, makes to our wellbeing. It is a great honour to be leading a project which will make such a positive and inspiring contribution to the city’s cultural rebuild.”

Gavin Reid said: “As well as being a creative hub hosting music and educational experiences of all kinds, the Dunard Centre will reach out beyond its own walls to be an inspirational springboard for outreach work across the city and beyond.

The City of Edinburgh Council Leader Adam McVey said: “The Dunard Centre is an exciting and important new cultural venue for our Capital. This is the first purpose-built concert venue in Edinburgh in more than 100 years which will expand Edinburgh’s landscape for enjoying music and the arts.  It is in a prime central and sustainable location, with fantastic public transport connections and will complement the wider transformation of the east end of the city centre alongside the opening of the Edinburgh St James Quarter- ensuring that our City centre remains a vibrant and thriving destination.”

Malcolm Buchanan, chair, Scotland Board, Royal Bank of Scotland, said: “The Dunard Centre is an exciting proposition that will enrich the city’s education, music and arts communities and one that we are proud to be part of.

“Royal Bank of Scotland has supported Scotland’s arts sectors throughout its 300-year history, three centuries which have cemented Edinburgh and the country’s position as a capital for global culture.

“The Dunard Centre will play a role in continuing that tradition and create further opportunity for another generation of artists and performers.”