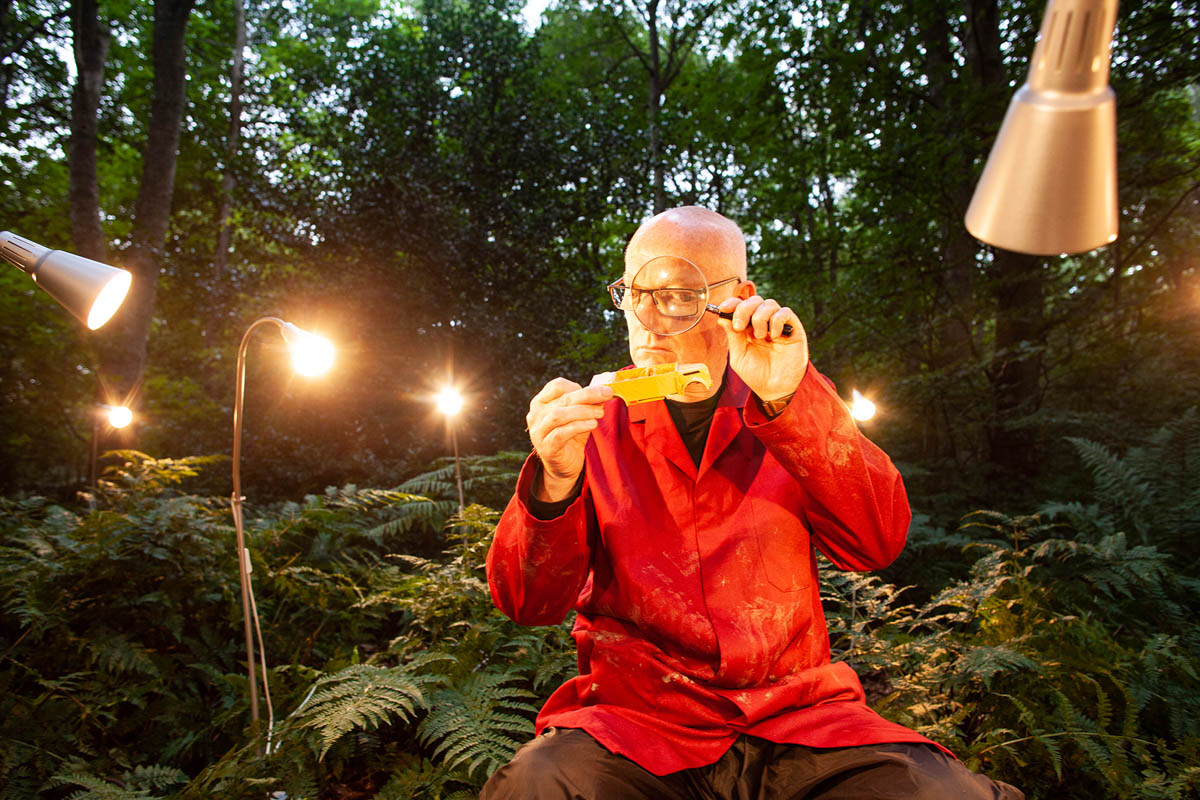 The award-winning Grid Iron Theatre Company is pleased to announce further details for its hugely anticipated outdoor, site-specific staging of Doppler, an adaptation of the best-selling novel by Norwegian author Erlend Loe.

The world premiere will take place in the woods of Newhailes House on the outskirts of Musselburgh between 8th and 23rd of August (no shows on 10th, 17th and 19th) with previews on 6th and 7th. Tickets go on sale tomorrow, 22nd July, at 12 noon on edfringe.com. The show will be staged in front of a small number of people to allow for social distancing and therefore audiences are encouraged to book early to avoid disappointment.

Tickets for Doppler will be released in batches to coincide with the changes in Covid-19-related restrictions with further ticket release announcements taking place on Grid Iron’s social media.

I am a man of my time. A failed man of my time. Or just a man of a failed time. Depending on how you look at it. Doppler had everything. He thought. Wife, two kids, 23 hour working week, time to ride his bicycle. Until the accident. Now he lives in the forest with an elk… Doppler is a funny and subversive fable about existence, consumerism and trying to live life in isolation when nobody will leave you alone.

Adapted and directed by Ben Harrison from the translation by Don Bartlett and Don Shaw, with dramaturgy by Eszter Marsalko, Doppler is produced by Judith Doherty with a cast that includes Keith Fleming, known for his role of Lesley in Outlander, in the eponymous role with Grid Iron-regular Sean Hay and Chloe-Ann Tylor known to wider audiences from Citizen Theatre’s Trainspotting portraying all the remaining characters. The Company is also working with several talented freelancers, including Fergus Dunnet who is producing the puppets for the show, Nik Paget-Tomlinson on music and foley, David Pollock on music and Becky Minto who is responsible for design.

Judith Doherty, Grid Iron’s Chief Executive and Co-Artistic Director said: “Doppler is back and this time he is LIVE! We are beyond excited to finally be able to confirm the details for the world premiere of Doppler. It has truly been a roller-coaster of a ride and we are so delighted to now be on terra firma and able to welcome our audience in person.

“We also want to say a massive thank you National Trust for Scotland for hosting Doppler and to all the wonderful staff and volunteers at Newhailes House and Gardens. We look forward to welcoming our audiences to the beautiful, shady woodland of Newhailes on the 6th August!”

Doppler was originally planned to be performed at Edinburgh Festival Fringe in 2020 but had to pivot to a digital sharing in light of the Covid-19 related restrictions. With only a few days of outdoor filming achieved due to Storm Francis, the Company decided to instead produce a documentary film charting the story of the show and its production, Doppler – The Story so Far, which was released for free in March 2020 and watched by almost 10,000 people worldwide. You can watch the documentary on the Company’s website.

Grid Iron, one of Creative Scotland’s Regularly Funded Organisations, is grateful to be one of a group of 15 shows and five venues awarded first ever Fringe Artist and Venue Recovery Fund. This generous support goes toward presenting a BSL-interpreted sharing of Doppler which will take place on Saturday, 14th August at 2pm and on Saturday, 21st August at 6pm.

Tickets starting from £8 are on sale at 12pm on Thursday, 22 July via edfringe.com.