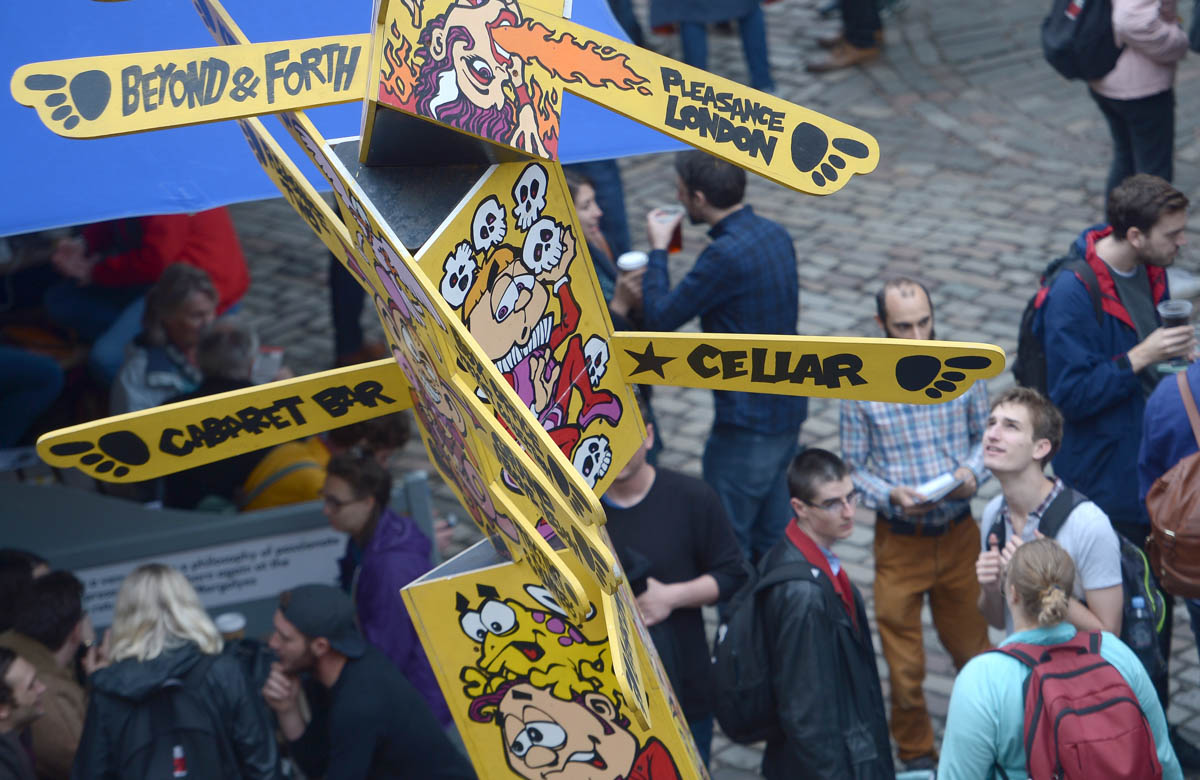 With the first of their comedy shows now on sale, Pleasance’s Edinburgh Fringe programme is packed with some of the top names on the circuit as well as the most exciting newcomers. There will also be innovative reinterpretations of works by household favourites including Roald Dahl and Shakespeare.

Further shows will also be released online for audiences to enjoy.

Comedy
After his first solo show at the Pleasance in 2005 and numerous marathon and solo shows, Edinburgh Fringe wouldn’t be complete without Mark Watson, who will be heading to the new pop-up venue at Pleasance Courtyard. At 41, Mark Watson is halfway through his days on earth, according to his £1.49 life expectancy app. That life is in the best shape yet, but one problem remains, and it’s a huge one. Join him as he crams a couple of years’ worth of pathological overthinking into This Can’t Be It.

Plenty more Pleasance comedy favourites will be joining him in Edinburgh. Hyper Reality is a shambolic new hour of frantic domestic updates from the Edinburgh Comedy Awards 2019 nominee, Ivo Graham. In Accidental Coconut, Njambi McGrath scrutinises her own story, her place in the world and her place in Britain, from the other side of the Empire.

Award-winning Fringe favourite Adam Rowe (Comedy Centrals’ Roast Battle) will bring IMPERIOUS (WIP) to Edinburgh for three nights only. Tessa Coates returns to Edinburgh, after two sell-out runs, armed with her useless degree in Anthropology and Campfire (WIP), about how we got here and where we’re supposed to go next.

Be among the first to hear new material by Eshaan Akbar (Mock the Week) as he puts the ‘work’ in ‘work-in-progress’ with I’ve Never Heard of You, And I Think You’re a Plonker. Fringe veteran and comedy scene legend, Hal Cruttenden will be back at his home away from home at the Fringe with brand new stand-up in It’s Best You Hear It From Me. After selling out his 2018 run, Jake Lambert returns to the Fringe with his most honest show yet, a new work-in-progress Shimmy Shake.

Mervyn Stutter and Friends and The Sorries

To celebrate a decade in comedy, Brennan Reece is going to tell you absolutely everything he has ever thought with the greatest hits from his trilogy of critically acclaimed shows Everglow, Everlong and Evermore.

Even with only a limited programme, Pleasance hasn’t stopped supporting the best up-and-coming comedy acts. In Hair, watch how Shelf (Funny Women Finalists) overcome the odds to create musical comedy, slam EDM, and tell the story of one bizarrely life changing haircut. Joe Thomas – a 37-year- old, weary, cheeky young anxious, old upstart who once played Simon in The Inbetweeners – will bring his debut stand-up show Trying Not To Panic to the Pleasance.

Professional slacker and sensitive friend Rajiv Karia (BBC Audio Contract Writer 2021) explores his life so far, and the journeys he’s yet to take in Gallivant (WIP). Join rising comedy talent and naive suburbanite Jake Farrell as he musters up the bottle and the jokes required to perform a debut hour about fear, the future and Stevenage in his new work-in-progress, Balance.

Theatre
This summer, try a fresh take on some household favourites. If you haven’t quite got round to penning your pandemic opus, why not help Will Shakespeare write a masterpiece in plague quarantine with Bard in the Yard: The Scottish Play – endorsed by Michelle Terry and Dame Helen Mirren! Adapted from Roald Dahl’s classic story, join storyteller John Kirk in a bonkers world of upside-down monkeys, wormy spaghetti and sticky hug-tight glue in Roald Dahl’s The Twits.

Meet Maddie North, a former Victoria Wood tribute act now recording vlogs in her Mum’s spare room in the touching and funny show, I Am Not Victoria Wood. If you’re in the mood for some music, Pleasance has you covered. With a decade at the Fringe and a sell-out run in 2019 under their kilt-belts, the duo The Sorries return with a selection from the much- loved Scottish songbook. Travel around the world with Interstellar Duo’s collection of original music and arrangements of well-known songs as voices, violin, viola and piano create a sound which is totally original.

Celebrating his 34th Fringe, Mervyn Stutter has gone alfresco and this year he’s hosting an intimate show of chat, chuckles, songs and great guests in Mervyn Stutter and Friends. Recipient of Pleasance’s National Partnership Award with York Theatre Royal, Eugene is a show about what happens when we give technology power over us. In the not-too-distant future, millionaire and inventor Hugh launches the first superhuman artificial intelligence – and you’re invited.

Edinburgh’s own Magic Gareth is bringing his colourful, interactive magic show, The Big Birthday Show to the Pleasance for all those who missed their own birthday parties because of COVID. Press is a powerful satire following two film producers as they discover that the heroic lead of their prestigious Civil War epic, played by a white actor, was in real-life actually Black. They frantically try to keep the film from getting any attention to prevent a career-jeopardizing backlash.

Online
If you’re not heading up to Edinburgh this year, that doesn’t mean you have to miss out on Fringe fun. Based on true events, Hitler’s Tasters is a dark comedy about the young women who had the ‘honour’ of being Adolf Hitler’s food tasters during the Third Reich. Award-winning company Popelei are bursting out of isolation with their darkly comic PUSH to stare down the barrel of motherhood.

With shows bringing the Fringe to Edinburgh, London and the world wide web, the Pleasance programme is not one to miss this August! There’s still plenty more to be announced including a very special guest doing a run of comedy shows at the end of this year’s festival.