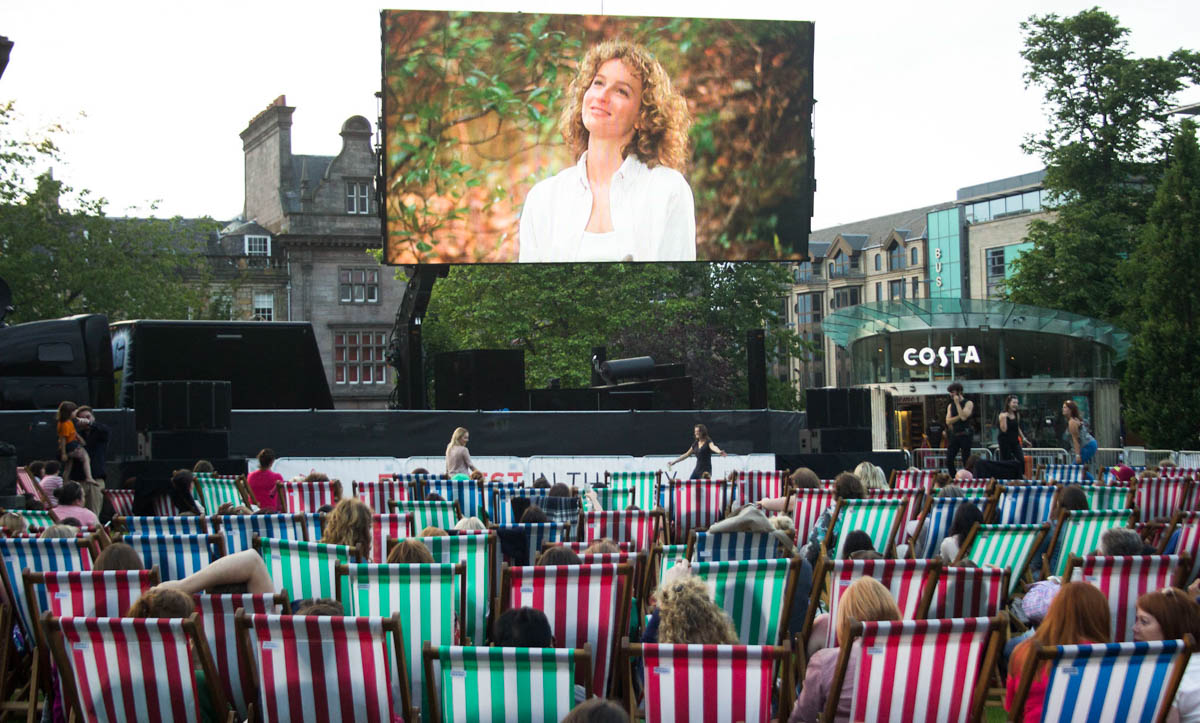 Making a long-awaited return to one of the city’s most iconic locations, St Andrew Square, with ‘Film Fest in the City’ Edinburgh International Film Festival will be presenting an ambitious and free programme of family favourites, timeless classics and blockbusters in partnership with Essential Edinburgh, and supported by Johnnie Walker and EventScotland.

This special open-air series of screenings coincides with the main programme of in-person and digital film premieres as part of the 74th edition of the city’s International Film Festival, not only ensuring the Festival’s city-wide presence but making cinema accessible to both film buffs and Edinburgh residents of all ages!

The event is free but ticketed. Tickets are available to Filmhouse Members on Wednesday 28 July, and will be on general sale from Thursday 29 July, by visiting www.edfilmfest.org.uk.

Audiences will enjoy the outdoor screenings in a safe, outdoor environment adhering to the Scottish Government guidance in place at the time, and with an amazing range of food and drink produce available to purchase on site, including EIFF’s Official Whisky Partner Johnnie Walker and EIFF Official Beer Partner Innis & Gunn, alongside Poco Prosecco offering alcoholic and non-alcoholic refreshments.

Bring your favourite cinema snacks and picnic blankets or sit yourself down on one of the famous St Andrew Square deck chairs to enjoy the following:

Thursday, 19 August
12pm The Wizard of Oz (1939, U) – featuring Judy Garland as Dorothy, multi award-winning The Wizard of Oz is one the most celebrated musical fantasy films of all time and remains a firm family favourite.
2.45pm Clueless (1995, 12) – a teenage classic with Alicia Silverstone as Cher, a rich high school student learning to cope with adolescence and her newly discovered feelings for Josh (Paul Rudd).
5.30pm Ferris Bueller’s Day Off (1986, 12A) – one of John Hughes’ greatest films, this is a teen comedy classic about a high-school slacker portrayed by Matthew Broderick who skips school for a day in Chicago.
8.15pm Stars Wars: Episode IV – A New Hope (1977, U) – first instalment of the original Star Wars trilogy, it follows Luke and Han Solo on a mission to rescue Princess Leia.

Friday, 20 August
12pm The Goonies (1985, 12A) – a classic adventure comedy following a group of young misfits on their adventure looking for a treasure…
3pm Lessons of the Hour (2019, 12A) – A single screen film version, in partnership with Edinburgh Art Festival, of Isaac Julien’s Lessons of the Hour, a poetic meditation on the life and times of the visionary African American orator, philosopher, intellectual, and self-liberated freedom-fighter, Frederick Douglass.
6.00pm Edinburgh’s Talking About Jamie – A unique and inclusive outdoor celebration event preceding the Special Preview of Everybody’s Talking About Jamie at Festival Theatre. Expect drag queen entertainment and cocktails. Those dressed to impress will be in with a chance of prizes for the best outfits.
8.30pm The Rocky Horror Picture Show (1975, 12A) – cult musical horror comedy, a parody tribute to the science fiction and horror B movies of the 30s through to the 60s.

Saturday, 21 August
11am Grease (Sing Along) (1978, PG) – John Travolta and Olivia Newton-John sing and dance in this ultimate ode to young love that never dies.
2pm Mamma Mia! (2008, PG) – one of the most successful musicals of recent times, an award-winning homage to the music of ABBA, featuring a starry cast, including Meryl Streep, Colin Firth and Pierce Brosnan.
5pm Hunt for the Wilderpeople (2016, 12A) – EIFF Young Programmers selection; an adventure comedy from Taika Waititi which follows a boy and his foster father (Sam Neill) as they become subjects of a manhunt after they get lost in the New Zealand wilderness.
7.15pm Star Wars: Episode V – The Empire Strikes Back (1980, PG) – widely considered one of the best sequels ever made, this instalment takes us to darker, more sinister parts of the Empire…

Sunday, 22 August
11am Frozen (Sing Along) (2013, PG) – Disney’s biggest hit of recent times, an already-cult, award-winning animation based on Andersen’s The Snow Queen it follows the adventures of sisters Elsa and Anna.
1.45pm E.T. the Extra-Terrestrial (1982, U) – a classic film by Steven Spielberg, it tells a touching story of an unlikely friendship between a boy and a gentle alien stranded on Earth.
4.45pm Star Wars: Episode VI – Return of the Jedi (1983, U) – a triumphant, action-filled finale to the trilogy which sees Luke attempting to bring his father back to light side of the Force.
8.00pm Amélie (2001, 15) – EIFF Young Programmers selection; starring Audrey Tautou, this charming French romantic comedy tells the story of a shy, naïve young woman who decides to help those around her and along the way, discovers love.

Monday, 23 August
12pm A League of Their Own (1992, PG) – Tom Hanks, Madonna and Gena Davies star in this sports comedy telling a fictionalised account of the real-life All-American Girls Professional Baseball League.
3pm Restless Natives (1985, PG) – a Scottish classic which follows two Edinburgh teens from Wester Hailes who rebel against their dull lives and become modern highwaymen.
5.30pm Bend It Like Beckham (2002, 12) – a romantic sports comedy starring Parminder Nagra and Keira Knightley, it follows an 18-year-old girl who, against the wishes of her parents, joins the local football team.
8.30pm Bridget Jones’s Diary (2001, 15) – a cult romantic comedy written by Richard Curtis and starring Renée Zellweger, Colin Firth and Hugh Grant, based on the best-selling novel by Helen Fielding.

Tuesday, 24 August
12pm Singin’ in the Rain (1952, U) – one of the greatest musicals ever made, it charts the story of the film industry transitioning from silent to ‘talkies’, featuring and directed by the one and only Gene Kelly.
2.45pm Murder on the Orient Express (1974, PG) – adaptation of the famous Agatha Christie murder mystery novel, directed by Sidney Lumet and starring Albert Finney as the Belgian detective Hercule Poirot.
5.45pm Moulin Rouge! (2001, 12A) – Oscar-winning jukebox romantic musical from Baz Luhrmann, starring Ewan McGregor as a poet who falls in love with the star of the Moulin Rouge, cabaret actress and courtesan, Satine (Nicole Kidman).
8.45pm Fast Times at Ridgemont High (1982, 15) – an extremely quotable classic coming-of-age drama with Sean Penn and Jennifer Jason-Leigh and notable cameos from the likes of Nicolas Cage and Eric Stoltz marking their on-screen debuts.

Wednesday, 25 August
12pm Casablanca (1942, U) – arguably one of the best films ever made, a classic romantic drama starring Humphrey Bogart and Ingrid Bergman with the backdrop of WW2.
2.45pm Sleepless in Seattle (1993, PG) – the queen of romantic comedy, Nora Ephron’s impossible to resist classic featuring Meg Ryan and Tom Hanks ranks among the best of the genre.
5.30pm Hairspray (2007, PG) – a new take on John Waters’ 1988 classic, this version sees John Travolta, Michelle Pfeiffer and Christopher Walken, among others, reimagine the irresistible story of a teenager who, against all odds, becomes a television star.
8.15pm Superman (1978, PG) – this special screening of the original Superman film featuring the unforgettable Christopher Reeve is a tribute to director Richard Donner who has recently passed away.

Nick Varley, Lead Guest Programmer of EIFF and Film Fest in the City said: “This year our Film Fest in the City screenings are simply put a celebration of the big screen. After a year of cinemas remaining closed and audiences being deprived of the shared experience only cinema brings, we are delighted to present a selection of films that, in our opinion, represent the true meaning of big screen entertainment. For those looking for a theme or meaning in the selection let’s just say it’s cinema for cinema’s sake – enjoy!”

Roddy Smith, CEO of Essential Edinburgh, said: “We are absolutely delighted that Film Fest in the City is returning bigger and better this year. It is always a great event, and to have a full week of screenings in St Andrew Square Garden this year is something to really look forward to. Our city centre has reopened with thousands of residents and visitors flocking back to enjoy everything it has to offer. What better way to enjoy summer than an outside screening of a classic film in a safe environment, in between some retail therapy or sampling the amazing hospitality offering within a five minute walk of the Square.”

Eileen Hanna, Head of Scotch and Lifestyle Whiskies at Diageo, said: “The magic of film has served us well through the past 18 months with so many of us re-watching old classics and discovering new favourites while being at home. However, nothing beats watching a movie on the big screen and we’re delighted to be supporting the Edinburgh International Film Festival for a third year.

“Johnnie Walker’s brand ethos is all about striding forward and the film industry is a perfect example of that. The list of classic screenings on show at this year’s EIFF features some of the most talented on screen and behind the screen talent that have gone on to become huge stars, showing how the spirit of progression is very much alive in the film industry.”