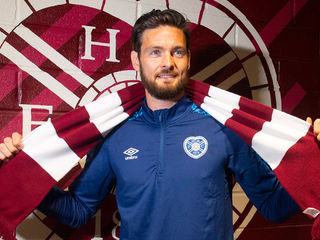 Gordon made his debut for Hearts in 2002 going on to make over 200 appearances for the men in maroon over two stints at the club he supported as a boy.

Neilson explained in a pre-match media briefing ahead of tomorrow’s trip to Peterhead that Gordon’s love of the club, coupled with his numerous years of experience made him the ideal candidate for the role.

Neilson said: “He was probably the only choice we had really when you look at the squad.

“We had a few other contenders, but I think it would have been a surprise if I went for anybody else.

“Craig, for me, is the right pick. I’ve spoken to some of the players, and they agree with it. Craig’s delighted to take the armband and I’m very happy to have him as captain. I think he’ll be great for us. You can see his leadership qualities. He leads by example, he’s the most experienced player we’ve got in the squad, and he’s still playing at the highest level having just been at the Euros.”

“I think it’s always important that the captain knows the club and understands what it’s like, and Craig knows everything about the club. He came through as a kid, got the big move to England and played at the highest level down there. He’s won trophies and he’s an internationalist who’s been at the Euros, so he’s got a lot of experience to help the younger ones and the senior ones. We’ve had a lot of good captains here over the years and I’m sure Craig will be one as well.”

New signings Josh Ginnelly, Ross Stewart and Alex Cochrane are all expected to be in tomorrow’s matchday squad and Neilson explained more signings will follow, but the transfer market south of the border is lacking activity right now.

Neilson said: “I’m really pleased, we’ve managed to get Alex in, we’ve got a couple of other areas we’d like to strengthen in, but it’s still very early in the transfer window everywhere else except Scotland, because we start competitive games so early, there’s not a lot of movement down south, or anywhere really, we’re just waiting for the right players to come up. We’ve got a couple of targets that we hope we’ll get in, but we’re still waiting for their final decision.”

The Hearts boss has been working alongside Sporting Director, Joe Savage and Neilson believes Hearts have a good squad, which just needs some extra quality thrown into the mix.

Neilson continued: “The main positive for us is, we’ve got a strong squad, we’re not desperate for players, we can put out a good side and have a strong bench as well, it’s just about adding that wee bit of quality to it now.

“Joe’s been great, his experience of England is great. The hardest part is getting the deal done, dealing with agents and contract negotiations, so having Joe go away and deal with that is great.”

Hearts kick off the new season with a trip to Balmoor Stadium tomorrow, looking to avenge the humiliating defeat they suffered against Peterhead at the same venue in 2017.

Robbie Neilson revealed that he has a full squad to choose from and is planning to name a strong side.

He said: “We’ll make changes, but we’re going into these games to win them so there won’t be too many changes. We’ll train tomorrow and then travel up, everybody’s fine, so hopefully everyone’s ready.”