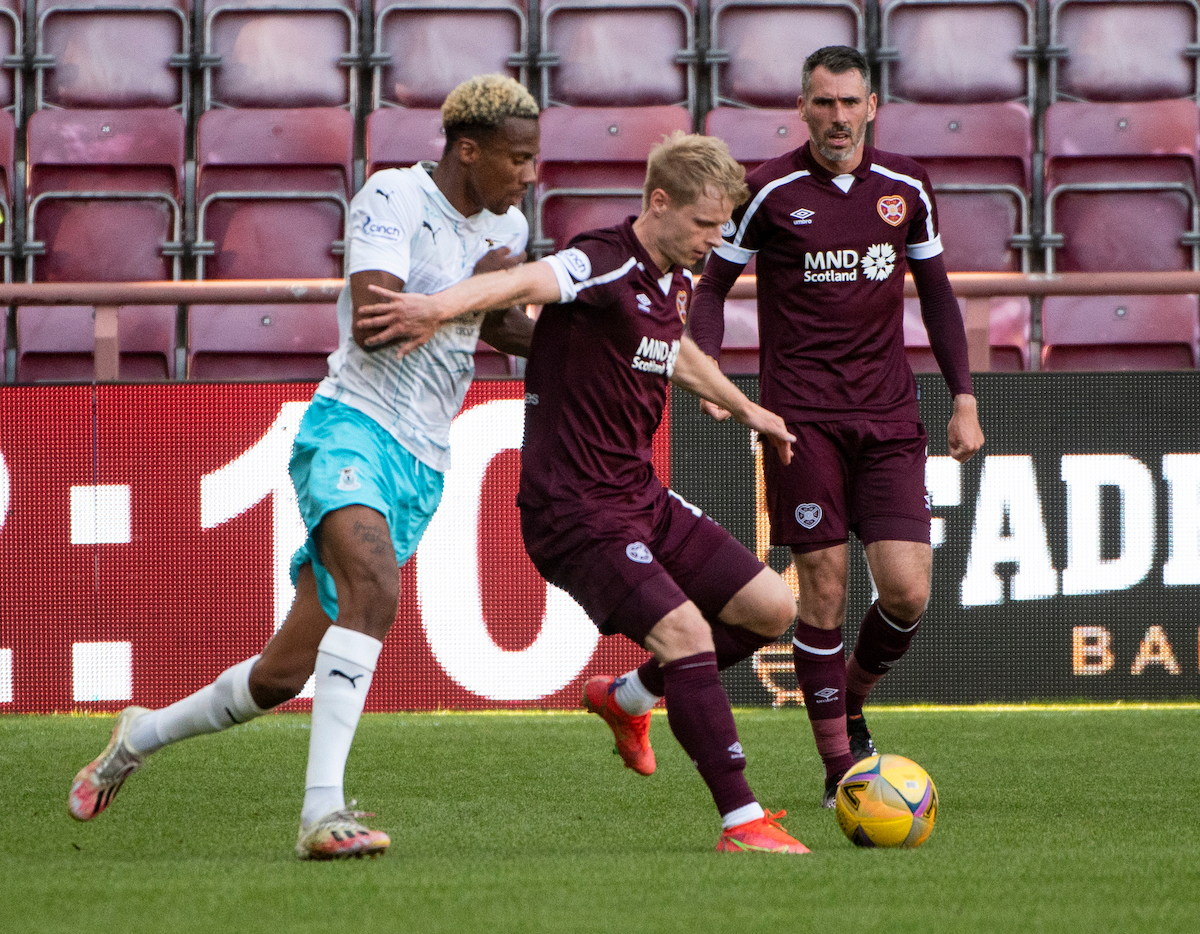 Jamie Walker scored his first goal of the season at the weekend to make sure Hearts made it four wins of four in the Premier Sports Cup and at the other end, goalkeeper Gordon kept his eleventh consecutive clean sheet.

Jason Cummings was the last player to score in a competitive fixture against keeper Craig Gordon and when the Hearts stopper was asked if he was struggling to keep track of all his records, Gordon replied: “It’s a good problem to have.

“It’s nice to keep that run going. Big thanks to Alex Cochrane for that clearance in the first half when it looked like we were going to concede, but that’s what the boys have been doing they’ve been putting their bodies in front of things, it’s not all about me, it’s about the guys working so hard in front of me, which makes my job that little bit easier.”

When Shane Sutherland crossed for Tom Walsh it seemed like Gordon’s record was about to be broken, but Alex Cochrane’s last-ditch challenge diverted the ball over, Gordon celebrated by wildly shaking the defender, before helping him to his feet and admitted he may have got a little carried away.

Gordon said: “I was just showing my appreciation to him there. It was a great recovery. We need players that are willing to make that extra effort to get back in like that because he came from nowhere to make that block.

“He saved a certain goal, it was crucial not to go behind then, because then they would’ve packed the defence and made it difficult. Huge block, huge for me and huge for the record, so yeah I got a bit excited with that, probably got a bit carried away, but I had to get him up because he had to defend the resulting corner and switch back on.”

Hearts have been experimenting with a 3-4-3 formation in pre-season and yesterday Liam Boyce played in a deeper midfield role behind the returning Armand Gnanduillet.

“We’ve been working on a few new formations,” Gordon explained.

“This is to make sure that we’re ready for the new season and so we can adapt to the new league. We want to be as prepared as we can be. We’ve got that togetherness from playing week in week out as a settled defensive unit which has definitely helped that.”

The victory wasn’t enough to make Hearts a seeded side in the round of 16 draw, as they had to win by two or more goals, and as a result, the Jambos have been drawn against Celtic.

Hearts could consider themselves unfortunate not to be seeded, considering other sides have benefitted from 3-0 victories against sides unable to fulfil a fixture due to positive Covid-19 cases.

Gordon said: “Scoring goals isn’t my department, so I can’t be held too responsible for that, but we’ve had some good performances. I guess it depends on who’s in your group. Sometimes you could play against teams that are easier to score against, it just depends on the luck of the draw and unfortunately for us we’ve come up a goal shy. Mark Ridgers saved nearly everything today, he was incredible and just had one of those nights.

“It’s probably good to get Celtic as early as possible. They’re trying to rebuild. Hopefully we can catch them a little early in season, but we know that’s going to be a really difficult task. We’ll need to play to the very best of our abilities. We got close last season in the last cup game we played them in, so we’ll give it our best shot and see if we can get through.”

Ange Postecoglou’s side will travel to Tynecastle on Saturday for the opening game of the season and despite the Glasgow side being a hot topic in Scottish football just now, Gordon admits he hasn’t paid much attention to the goings on at Parkhead.

He said: “I’ve not taken to much notice of Celtic to be honest. There’s been enough games here to keep me busy and I’ve got added responsibility of the captaincy now, so I’ve not really looked at anything other than ourselves.

“I’m sure they’ll sort whatever out. They’ll always be able to sign new players with the money and the means they have, so I’m sure they’ll look to add before the end of the window and there might be some more moving out you just don’t know.”

Just under 3,000 Hearts fans were at Tynecastle on Sunday and the club will be hoping to welcome a lot more for Celtic’s visit. Gordon admitted that having fans at home makes it difficult for opposition sides to win.

“The fans make it very special and very difficult for other teams to come and get results. If the fans are here backing us it makes a huge difference whoever we’re playing against, so I hope we get as many of them in as possible.

“That’s what we’ve been looking towards throughout pre-season. Everybody has really stepped up, especially as a defensive unit and we’re all really looking forward to it now.”

Gordon will lead out Hearts on Saturday after being made the new captain earlier in the month and admits it’s going to be a special moment.