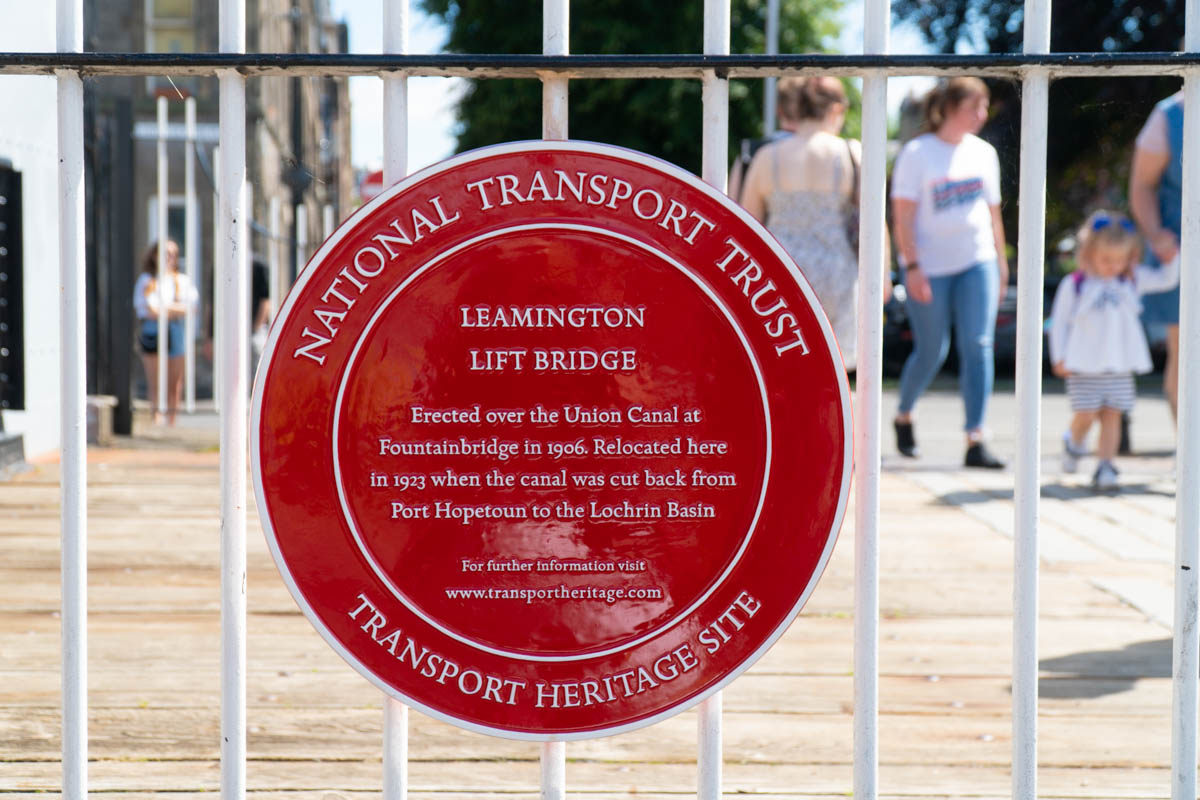 The Leamington Lift Bridge on the Union Canal has been given a new award by The National Transport Trust (NTT). There is a new Red Wheel plaque on the gate adjacent to the bridge denoting the site as one of importance to transport heritage.

John Cameron CBE, a former Chairman of ScotRail, did the honours on Wednesday and in a short speech before an assembled audience, he explained the history of the bridge after which the operatives from Scottish Canals demonstrated that the bridge does still rise and fall to accommodate canal traffic.

The Union Canal opened in 1822 linking the Forth & Clyde with basins in Edinburgh at Port Hamilton and Port Hopetoun in Tollcross mainly to bring mineral traffic into Edinburgh.

The bridge was put in its current position in 1922 relating a drawbridge linking Gilmore Park and Leamington Road. It is constructed from a wooden deck that can be raised between two gantries giving clearance of 9 feet below. It is not open to cars and only serves those on foot, in wheelchairs or on bikes.

The permanent lattice girder footbridge allows pedestrians to cross even when the deck is raised – and it can be raised by anyone who has been appropriately trained by Scottish Canals.

The Red Wheel is inscribed: “Leamington Lift Bridge Erected over the Union Canal at Fountainbridge in 1906. Relocated here in 1923 when the canal was cut back from Port Hopetoun to the Lochrin Basin.”

In a fit of modernisation it was the railways that spelled the end of the canal’s most useful life taking passengers on the new Edinburgh & Glasgow Railway. The canal was formally closed in 1965 until the Millennium Link led to its reopening as a route for pleasure craft and towpath users in central Scotland, linked by the innovative Falkirk Wheel.

The bridge was further refurbished two years ago following a significant contribution from Sustrans to ensure it remains an important part of the National Cycle Network due to their ongoing partnership with Scottish Canals. It provides a vital connection to people walking wheeling and cycling including to and from the new Boroughmuir High School.

Mr Cameron said: “Today really is a red letter day for Red Wheel in Scotland because this is the first red wheel awarded to Scottish Canals. It was the railways which took away much of the traffic and the canal eventually closed until the restoration during the Millennium Link project.

“The original lifting bridge was provided by the North British Railway in 1906 and relocated to its present position here in 1922. The bridge is the width of a single canal boat and the only structure hydraulically operated on the canal.

“A report issued in 2000 almost brought the bridge to an end by suggesting that it would be maintained in the open position, but fortunately a decision from higher up led to it being fully restored.”