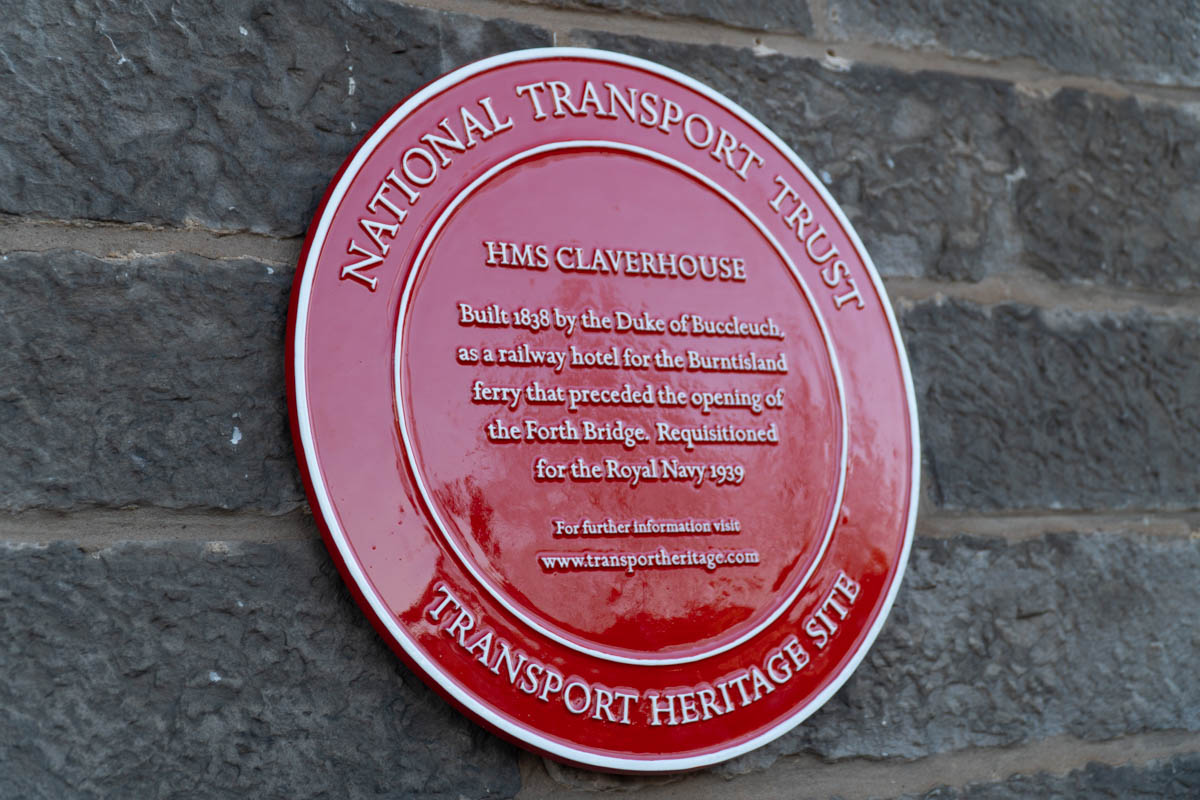 Three new red Transport Wheels have been unveiled in Edinburgh. These plaques are put up at sites of transport heritage significance.

The first at Claverhouse Army Reserve Centre was officially unveiled by Baroness Goldie, Minister of State for Defence before a small group of people invited by the National Transport Trust (NTT) including NTT Vice President John Yellowlees and Deputy Chairman Jerry Swift.

Captain Howie also showed the group around the building before the unveiling of the new Red Wheel. A red wheel was been unveiled at Burntisland in December 2020.

Deputy Chairman Jerry Swift introduced Baroness Goldie outside the front door where the plaque is situated on the right hand side. He said: “We celebrate transport heritage right around the United Kingdom, and we’ve been trying to get a few more of our red wheels here in Scotland. The purpose of the red wheel is to alert people to transport heritage that they might not be aware of. I’m sure there are thousands of people on buses around this roundabout every day. How many of them would have known that this was associated with the world’s first seagoing roll on roll off ferry, which went from a pier just over there?”

Baroness Goldie thanked the NTT Vice-President, John Yellowlees for the work he does and his “assiduous interest in heritage”. She said: “This is an establishment which has had many past lives, and unsurpisingly given its history, there’s still a bit of multitasking going on here.

“The Duke of Buccleuch helped to put up this building, and the father of William Gladstone helped to create the harbour nearby, the grandfather of Robert Louis Stevenson offered advice in developing the port. Sir Thomas Bouch created the first roll on roll off ferry on a seagoing route. Sir Thomas designed the first and ill-fated Tay Bridge so I think we are all relieved that this building has had a more fortunate existence.

“What has stood out throughout this building’s existence, whether for transport or defence is the way it has always been of service to our nation – to Scotland and the UK.

“It is with enormous pleasure and no small sense of pride that I unveil this great Red Wheel celebrating a fine building with its evocative historic name, HMS Claverhouse.”

The former Granton Hotel was built by the Duke of Buccleuch in 1838 when the first roll on roll off ferry was set up to take goods wagons from Granton to Burntisland. Later, passengers would also travel by rail to Granton and then on the ferry continuing their rail journey from Fife northwards. The hotel was close to the pier from where the freight and passengers were taken across the Forth. There is a question over whether the hotel was designed by William Burn or John Henderson.

Other than this crossing the only other was at Stirling before the Forth Bridge opened in 1890. The passenger train service ended in 1925 and freight came to a halt in 1986.

Local passenger trains became uneconomic owing to competition from the trams, although a passenger ferry ran until the outbreak of World War Two. Then the hotel was commissioned by the Royal Navy for the duration of the war, became a Drill Ship until 1958 and continued to be a Naval Reserve HQ until 1995. Still today the Edinburgh Sea Cadet Unit TS Trinity use the building.

The Field Hospital which currently occupies the building is home to The Army Medical Services Reservists who are employees of NHS Scotland.

The second Red Wheel was unveiled by the City Archaeologist, John Lawson, on behalf of the building owner, The City of Edinburgh Council, at Madelvic House in Granton.

The Madelvic Motor Carriage Co founded by William Peck built electric vehicles there from 1898 for a period of two years before going into Voluntary Liquidation. Madelvic is the oldest purpose-built car factory in the UK, although most of the buildings are now derelict and empty. During the Second World War the building was used to store torpedoes.

Mr Lawson said that it was about two years ago when he met National Transport Trust Chair, Stuart Wilkinson, at the Tower of London that he first got to know about the car factory. He said: “This was an ideal opportunity as the council owns the building – an easy win to celebrate our transport heritage. I am delighted on behalf of the council to unveil this plaque.”

Willie Black, Chair of the History Group at Granton Hub which is based in Madelvic house explained what their group, only one of several occupants is doing there.

Mr Black said: “We are trying to create an archive. We have lots of information and at various times we try to reveal that information and try to make sense of it for our area. There will be 4,000 new homes here soon and we aim to give our new residents a sense of the history and welcome them to this new place

“We have a red wheel now unveiled, but we have another wheel on the front of the building which is the fifth wheel from the Madelvic electric motor car built here.

“We hope to renovate the factory next door – it will be a major project and hopefully it will be part of the Granton Waterfront development. We hope to salvage most of the building and then use it for people doing various projects – including a transport museum. This will look at the history of modern cars.

“We are part of Curious Edinburgh – an app that was developed with University of Edinburgh and we are the first tour outside the city centre. People use the app to go wandering, but more than that we actually lead tours. We are probably going to re-emerge with that tour in the New Year.”

The vehicle first built at Madelvic, an electric powered car driven by an extra, fifth, wheel under the vehicle, was not capable of any great speed and did not prove popular. This was despite efforts to promote the vehicles, including exhibiting at the Edinburgh Cycle Show in February 1899. “See the very latest type of motor vehicles… Early orders are necessary to ensure delivery this year” said the advertisement.

Designs were improved and by May 1899 the company had been awarded a contract by Her Majesty’s Postmaster General for carrying mail between the General Post Office in Edinburgh (Waterloo Place) and Leith. They built at least three electric vans for the purpose, and the service began on 14 May. These were the first motor vans used by the postal service in Scotland.

Unlike the first cars, the electric motors drove directly onto the front axle, without any belts or chains. The vehicles had a tubular steel chassis, and weighed about 18 cwt (900 kg). They were capable of carrying over half a ton of mail (500 kg) on a route that included the steep slope of Leith Street. The power was supplied by accumulators (rechargeable batteries) located at the front of the vehicle.

The current planning approval for Madelvic House is for a community garden, but the History Group hopes to piggy back onto the momentum which will be created by the Granton Waterfront project when that gets underway.

The third plaque was unveiled by Debs Newman, General Manager and Rob Carpenter, Founder of the Holyrood Distillery at the Innocent Railway Tunnel where the Warehouse of the Edinburgh & Dalkeith Railway Innocent line opened in 1831.

This was the city’s first railway built to carry coal and agricultural goods. It was horse and rope hauled until 1846 and closed in 1968. This lies next to the new Holyrood Distillery and the route it took will be close to the heart of those who are trying to revive the Edinburgh South Suburban Railway. The description is: “From Edinburgh’s first station at St Leonards, the route passed in Scotland’s first railway tunnel 518 metres long under the shoulder of Arthur’s Seat, then by Duddingston Loch to Cairntows, where it joined what is now the Edinburgh South Suburban freight route. Turning right at Niddrie, it followed what became the Waverley Line to cross the North Esk at the graceful single-arch Glenesk Viaduct which is now again carrying passenger trains on the Borders Railway. An extension to along the Marquess of Lothian’s waggonway to Newtongrange took it across the South Esk by the timber Dalhousie Viaduct whose abutments may just be seen behind the Sun Inn.”

The Innocent Railway is now a very useful path for anyone walking, wheeling or cycling and saves a long detour by busy surrounding streets. 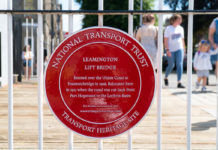 A Red Wheel installed at The Leamington Lift Bridge