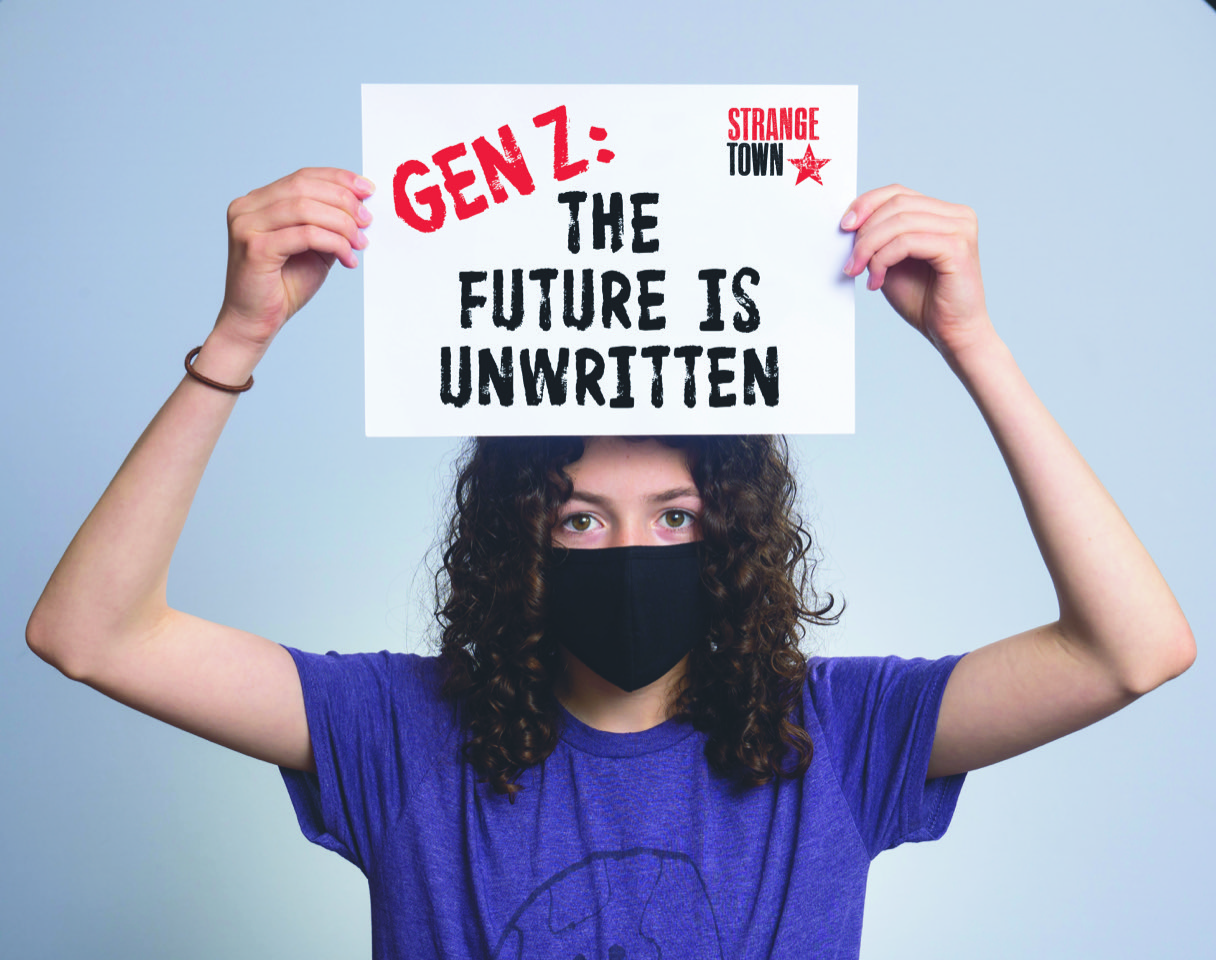 Strange Town, one of Scotland’s leading theatre companies for young people, tell us that their large scale multi-artform project – theatre, movement, spoken word, film, sound – ‘Generation Z: The Future is Unwritten’, will culminate in a live promenade performance and video installation event at Out of the Blue Drill Hall, Dalmeny Street, on Friday 18 and Saturday 19 June 2021.

Despite the challenges of Covid-19 restrictions throughout the five-month project, Strange Town’s most ambitious production to date has involved more than 120 young people (aged 8 -18) from Edinburgh, with support from the company’s emerging playwrights (aged 18-25) and directors; and guided and mentored by industry professionals.

Using the stimulus, ‘Can Young People Change the World?’, ‘Generation Z: The Future is Unwritten’ has been created by, and will be performed by, members of the eight Strange Town Youth Theatre Groups from across the city.  The members of Strange Town Youth Theatre responded to the stimulus with work addressing a range of topics including isolation, technology, identity, generational division, Black Lives Matter, climate change, ideal society/world, protest, kindness, having your voice heard and Covid-19.

In order to maximise the opportunities audiences will have to experience the live performance and video installation, the 60-minute promenade event will be presented to 20 socially distanced audience members three times a night in three separate spaces.  The whole audience will come together to experience a live performance from just six actors before being split into two separate groups to watch film and listen to audio material.

Additionally, a site specific eight-minute video will be projected on a wall next to the St. Andrew, Ukrainian Catholic Church of Our Lady of Pochaev, on Dalmeny Street, which will include a specially choreographed movement piece.  This will also be be a ticketed event for socially distanced audiences.

On 26 and 27 June there will be an opportunity to pay to view a film of the live event together with a variety of additional video, audio and written material developed by the groups.

Funded by Creative Scotland’s Open Fund: Sustaining Creative Development Programme, through the National Lottery, ‘Generation Z: The Future is Unwritten’ has been developed flexibly in response to the ever-changing situation caused by the pandemic.

The eight groups have met for weekly online digital drama workshops and face-to-face creative sessions, where possible, to explore the question and to create, write, film and record material.  The groups have also worked together with members of the new Strange Town Young Writers Group who have both developed the work the groups have devised and written their own additional scenes. As well as theatre, choreography and movement has played a big part in the project.  70 young people from the company got involved in a professionally choreographed movement piece, reflecting on the stimulus.  This involved Zoom rehearsals and everybody recording their final performance on their mobile phones.

Rehearsals for the live performance are now underway with a drastically reduced number of actors working to strict guidelines, while video and sound design and editing is nearing completion

Steve Small, co-creative director of Strange Town and producer of ‘Generation Z: The Future is Unwritten’, said: “The Gen Z project is a testament to the hard work put in by everybody involved in the company. Despite the challenges and difficulties of the pandemic, watching the enthusiasm, skill and pride with which the production team has undertaken this task and having seen how the young people have adapted and risen to the challenge, as well as the range and quality of the work they’ve produced, it’s impossible not to feel massively encouraged. Despite the dark days of the lockdown restrictions, we hope better days are coming. People will always find a way to be creative.

“Thanks to the funding from Creative Scotland, Generation Z: The Future is Unwritten’s mix of indoor and outdoor and digital work means that everyone will be able to enjoy it wherever they are. We hope it will create some much-needed hope and enjoyment for 2021.”

Out of the Blue Drill Hall Café opening today