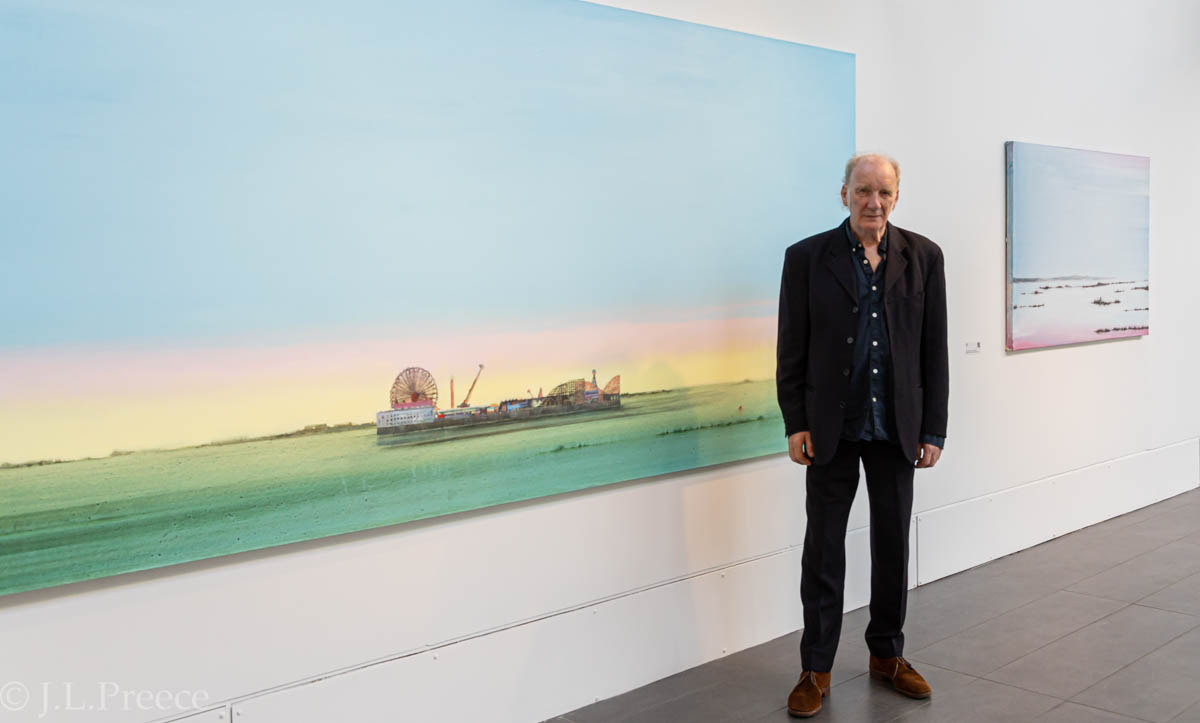 In partnership with The Scottish Gallery, Scotland’s Dovecot Studios will mark the artist Jock McFadyen’s 70th birthday year with an exhibition of recent paintings which describe the romance and grandeur of the Scottish landscape, alongside the urban dystopia for which the artist is known.

Christina Jansen, director of The Scottish Gallery, commented, “McFadyen paints the exterior world with a cool detachment that carries an emotional punch, and Lost Boat Party perfectly describes his approach – floating through the landscape to find and show the strange enigmatic portion only seen when looking for something else.

“The painting ‘Lost Boat Party’ is a monumental work, depicting a seaside funfair which appears to have detached itself from the land and is slowly drifting out to sea. The metaphor for the human condition is unavoidable, and many of the paintings in the exhibition describe the sea with all its implications of threat and indifference, as well as painterly possibility.”

It is no accident that the artist was taught by a generation of abstract painters whose presence is felt in these paintings describing the contemporary world; paintings such as Mallaig and Estuary Music are almost minimalist, and all the paintings – save for one which has a tiny figure, difficult to find at only half an inch tall – are void of human presence, instead inviting the viewer to inhabit the haunting and occasionally hostile panoramas of land and sea before them.

Over the last seven months, Dovecot has collaborated with McFadyen to make a new artwork documentation of the collaboration. In working with Dovecot, McFadyen joins a roster of Royal Academicians including David Hockney, Graham Sutherland, Barbara Rae and Chris Ofili.

Naomi Robertson, Master Weaver at Dovecot Studios, commented, “Our initial aim was to explore the beauty in the paintings. We have experimented with how to amplify the complex undertones in Jock’s use of paint through the blending of yarn as well as the innate sensuality of the textile surface. The way in which the final work absorbs light emphasises a depth of colour that is just not possible with paint.”

An extension to the exhibition can also be seen at The Scottish Gallery’s private space in the New Town – this will be presented virtually to accompany the Dovecot Studios exhibition.

The exhibition forms part of the Edinburgh Art Festival 2021 programme and is the second in four UK exhibitions celebrating the artist’s impressive 45-year career. Lost Boat Party follows Jock McFadyen goes to the Pictures at City Art Centre, Edinburgh and will be followed by exhibitions at the Royal Academy in London in early 2022 and a full retrospective at The Lowry in Manchester.

McFadyen’s work is included in over 40 public collections including the V&A, SNGMA, Government Art Collection and Tate, as well as corporate and private collections in the UK and abroad. A monograph on the artist was published by Lund Humphries in 2001 and in 2019 a second monograph, written by Rowan Moore, was published by the Royal Academy. McFadyen was elected to the Royal Academy in 2012.