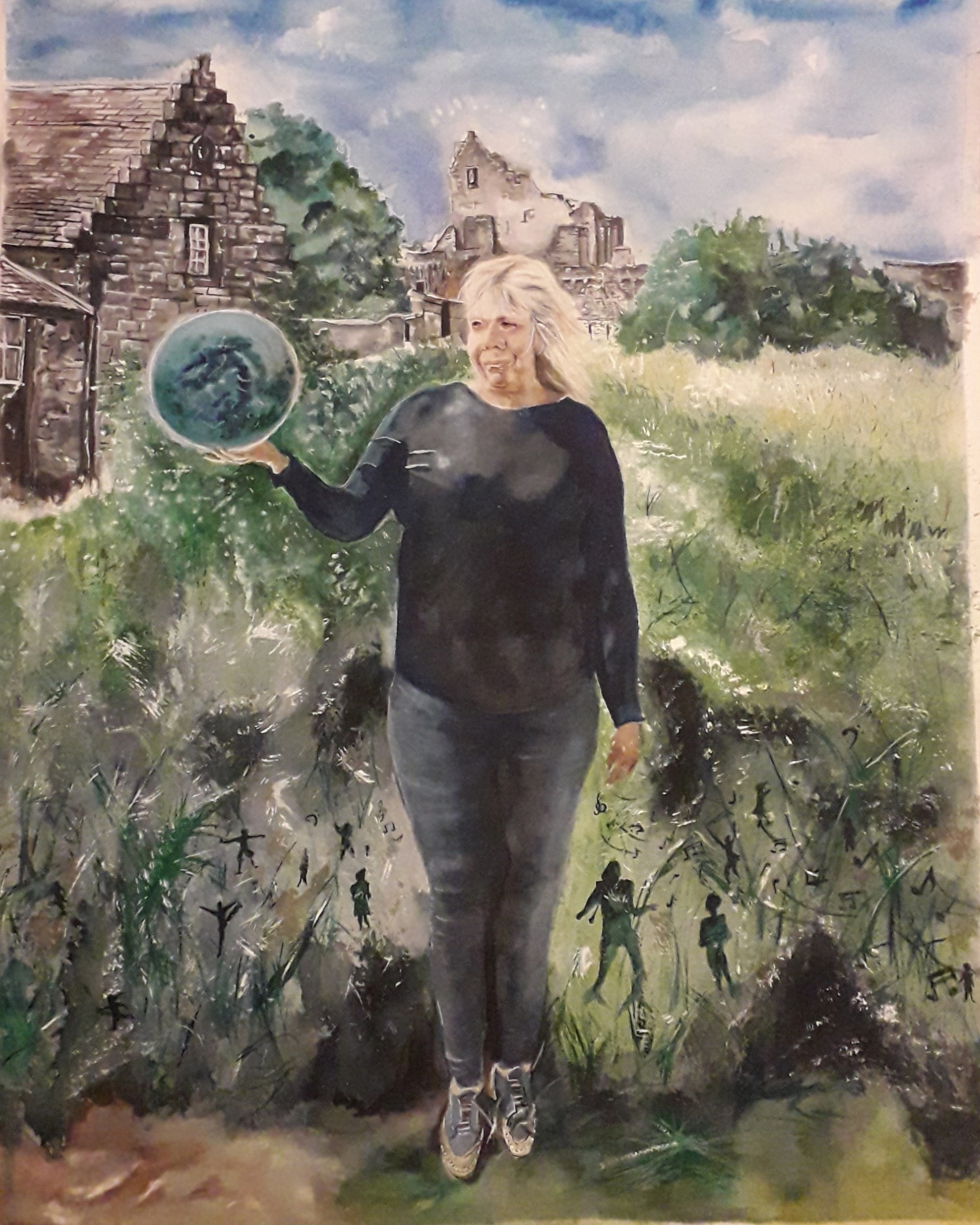 This is a new painting of Susan Heron, manager at The Venchie in Craigmillar. It is a stunning piece, showing Susan in her own local landscape, holding the world in her hand.

It is the work of the founding artist of @AnchorClose, Gillian Cummings, which she describes as a little arts project aiming to capture contemporary folk culture and stories in the capital.

The project will have a website later in the summer, but meantime there is an Instagram page up which is kept to date. Gillian is a writer and artist from Edinburgh with a background in support and community/folk arts, and she is running the project for now, but he hopes it will attract other artists in time.

The project is designed to prompt questions about local people, and the focus will be on them rather than the artists who create any specific artwork, but Gillian relented and allowed herself to be identified as the painter.

She said: “This project is around creative support in the city. It is about creating a culture of a different experience of Edinburgh, and about people in other areas of the city who are doing interesting things, perhaps the untold stories.”

Craigmillar Castle is in the background of the painting and at Susan’s feet there are symbols of music and dancing figures representing her background in the arts. She loves being involved with community drama, saying that she is more of an actor than a singer.

Susan is depicted holding the globe in her hand in a recognisable Craigmillar landscape – something which she particularly loves.

Susan said: “I love the painting. I feel she has really captured me and I love that I have the whole world set within my world as it were.”

Gillian said: “The reason that we called it Anchor Close is really because we felt that we wanted to reflect and look at what really anchors the Edinburgh cultural experience. The anchor for us is around people, people who live in all different areas of Edinburgh and not just in the city centre.

“The thrust of the project is about exploring what cultural experience looks like not just during the high times at the festival but also throughout the year, discovering who is out there actively nurturing people within their community and who is trying to create new experiences for people.

“What happened was I grew up on a council estate in Edinburgh and lots of people were aware of the Craigmillar People’s Festival and Helen Crummy. I think Craigmillar and Niddrie are really interesting areas, and I think one of the first to really look at certain difficult experiences and how to channel them into a cultural growth for the area. That was my introduction then a few years ago when I was beginning to think about this project I did lots of research into Helen Crummy. I painted a picture of her which is also on the Instagram feed.

“I have a background in support work and I suppose creative support work. I am a writer and an artist so I have done different pieces of work within communities over the years. I was really interested in Helen Crummy and from that I became interested in Craigmillar. When I painted the picture of Helen someone suggested I should put it up on the Niddrons Facebook page, and when I did, Susan commented on it. I suppose I had some early ideas around the project looking at the cultural legacy of Craigmillar and of working-class people in Edinburgh.

“I contacted Susan and we had these really amazing conversations. She was very open and spoke about her experiences growing up in Craigmillar, what the festival had meant to her and her relationship with Helen Crummy.

“She was really inspiring and when I got to know her better I realised that all of that work is continuing at The Venchie, and there is this rich historical legacy that needed to be nurtured and supported. Although Susan has lots of support within the community, I still felt that people really got behind that project.”

Gillian set up @AnchorClose with little or no funding, not really wanting it to be either a social enterprise or a for profit organisation. She has had some discussions with Creative Scotland but nothing has come of that for now.

It is at its core around creative support making a culture which reflects a different experience of Edinburgh from that seen during the summer festivals.

Gillian said: “Susan was very instrumental in the way the painting turned out. We met and I wanted to paint her, and we had lots of conversations about how the painting could come about. The symbolism within the painting is very much influenced by those conversations.

“I wanted the painting to provoke questions as well as being reflective of the work Susan does at The Venchie. I’m glad she likes it – I was relieved that she does.

“The painting is fairly big and what will eventually happen is that the painting will be published our website – it will act as a window onto that area.

“If people come across it on the website then the hope will be that any future stories or events linked to Susan or The Venchie the it will shine a little bit more of a spotlight on it.”

Craigmillar has been a real centre for the arts over the years, with bodies such as the Craigmillar Festival Society. There is to be an archive collated by Craigmillar Now which has taken over the arts centre in a renovated former church building at Fort Kinnaird. And of course Susan is on the team organising that too. She is already busy with The Venchie which provides a breakfast and after school club for about 100 children and young people each week. Each Tuesday The Venchie runs a food outlet with an assortment of meals on offer for a small donation which the group uses to restock their supplies. During the rest of the week there is a free food table with fresh fruit and vegetables, tins, pastas and household necessities outside The Venchie on Niddrie Mains Terrace.