Nine-year-old Abby Wallace from Edinburgh has a starring role in the new BBC series, Dinosaur.

Abby who trained at Stagebox in their theatre training programme which has only just come to Scotland, plays young Nina, the younger version of the lead character.

Following in the footsteps of 11-year-old Lexi Sheppard, who is filming for a Netflix movie musical, Abby is benefiting from the opportunities which the talent management company discovers for its clients.

The series began on BBC Three and will also be shown on 7 June 2021 on BBC One. 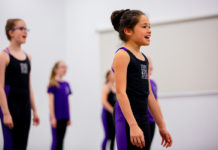