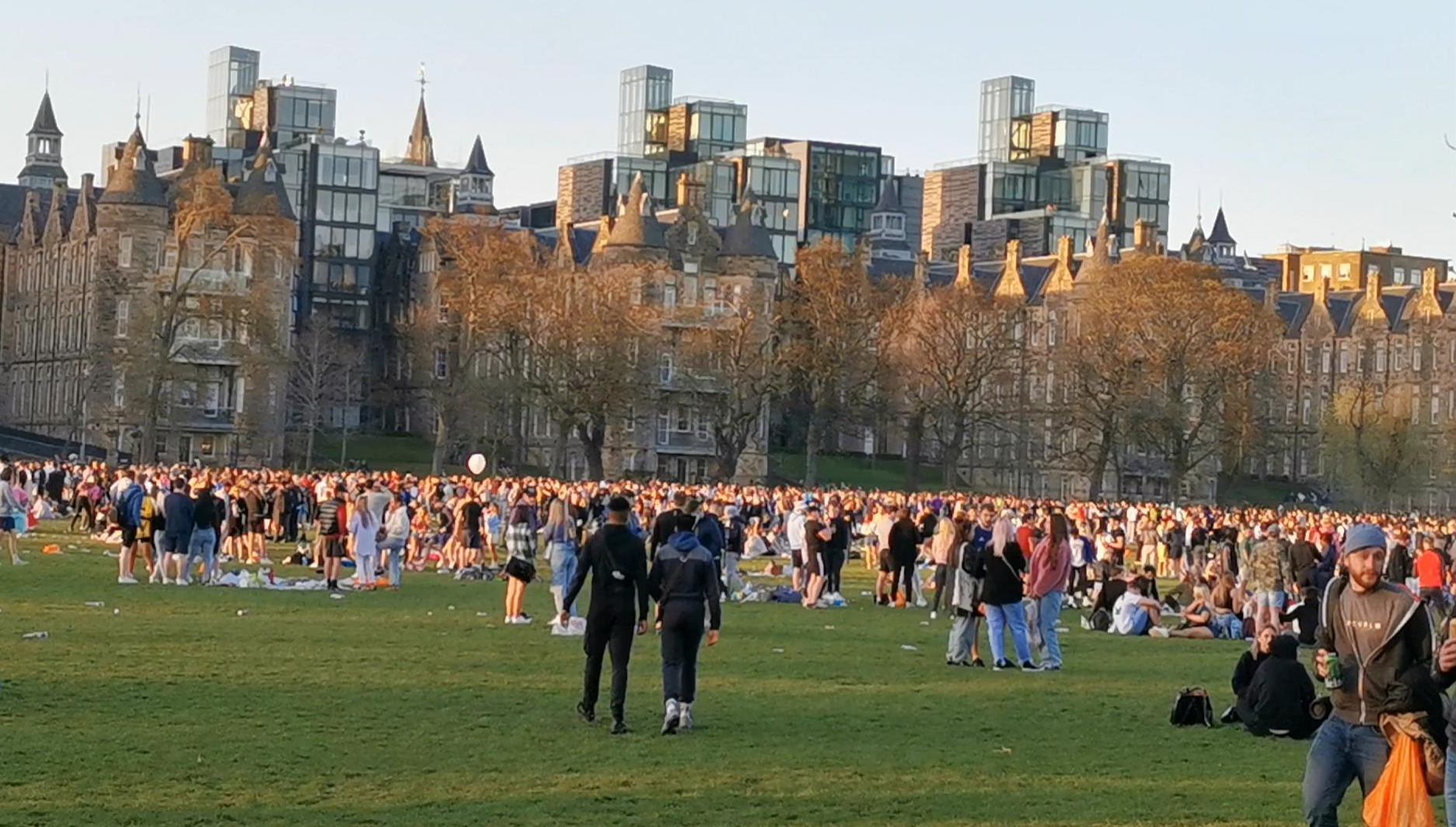 Over the weekend social media was awash with photos and video of people gathering in The Meadows on Friday and on Saturday afternoons and evenings.

Even the First Minister mentioned The Meadows in today’s media briefing. She said: “Don’t for now meet in groups of more than four people, for adults that group of four people should not have any more than two households within it.

“Most people I know are following all of these rules really rigidly, and I am hugely grateful for that, but I am stressing this point particulary about outdoor gatherings  because we did see some scenes at the weekend – particularly on the Meadows here in Edinburgh – that were of considerable concern.

“Police officers should not have to get involved in dispersing large groups of people.”

Police Scotland has condemned the antisocial behaviour witnessed at the weekend, a 17-year-old youth suffered serious injuries and a 22-year-old man was apparently attacked. While they are searching for more information, three people have been charged in connection with antisocial behaviour and a serious assault.

Representatives from 6VT, a charity which works with young people from all over Edinburgh and the Lothians, were in attendance on Friday and Saturday at The Meadows. We spoke to Dot Horne, Executive Director at 6VT, and Megan Binns, a Lead Youth Practitioner with the charity.

Ms Horne explained that this is a time of year when the organisation takes to the streets to offer assistance. She said: “Just to put this in context at Easter we do start to go out and do street work, generally around Princes Mall. We know that around Easter there is a rise in antisocial behaviour from our own experience over the years. So this weekend was our first out doing street work and this time we went to The Meadows.

“Ordinarily our work would be to go and speak with young people, look after young people’s safety, and promote our services to them. But then we saw the vast scale of what was happening there in terms of the amount of young people engaging in alcohol misuse – it was vast on both days. Then it came down to offering safety messages, asking them how they were going to get home or advising them to consider how they were going to keep themselves safe. We were aware there had been a rise in antisocial behaviour, and explained to them that they might be vulnerable to others who has perhaps just come to create trouble. Many welcomed that advice.

“The police were out, but you could have easily thought there was no pandemic because there were so many people there of all ages drinking. The alcohol consumption is incredibly worrying.”

Megan Binns was at The Meadows on Saturday. She said that she engaged with young people from 13 to 20-years-old, all of whom were just happy to be out and really enjoying the company of their peers. She explained: “There was no negativity towards us, but there was no social distancing or mask wearing. They were just wanting to be out with friends having not seen them for such a long time.

“They have had no opportunities in the last year to really be a young person, I guess. But the difficulty in this scenario is that a lot of the young people were drinking alcohol and there was substance misuse. Some young people may never have drunk before. The sun was shining, they were dehydrated and young people were putting themselves at risk. It wasn’t a safe place to be on Saturday night, or Saturday afternoon even. Some of them were quite naive as to what was going on around them.

“I think the best way to describe it is that it felt like a festival. There was however a shift in the mood as young people were getting drunker and it became a bit more aggressive.”

Dot continued: “We usually see a rise in antisocial behaviour because it is the school holidays, because of some better weather. So now we need to ask how we are going to approach it. Whatever’s happened at The Meadows needs to be interrupted, and of course while this will happen in other places it is almost the case that the more publicity it gets, the greater the attraction becomes.”

Dot agrees that a more proactive approach would be good, and having a balance of age groups there would help. She observed that there were children and young people from all walks of life in the Meadows at the weekend. One of the best things the charity had to offer was a black bin bag, and they handed many out and the young people appeared to use them.

6VT also have a hospital youth team who are based at the Royal Infirmary on Friday and Saturday nights. Dot said they got to see the “impact and consequences of the victims of the violence, as well as people who had over consumed alcohol” for themselves.

Dot concluded: “There needs to be a long term arrangement which hopefully address issues of over-consumption of alcohol. But the reality is, we need something that makes that place safer for everybody as soon as possible.”

CALL FOR A SUMMIT

An SNP Lothian List candidate, Alex Orr, has called for a summit to be held over what he describes as Mayhem in the Meadows.

Mr Orr lives locally and tweeted several photos and videos of the crowds which he has shared with us. He wrote to all other local politicians demanding a summit to come up with an action plan.

He explained that in 1886 the Edinburgh International Exhibition attracted tens of thousands to the Meadows and the enormous main pavilion there. He wondered what our forefathers responsible for the event might have made of the scenes of violence, public urination and defecation in the streets surrounding the Meadows, and the litter left after a gathering of hundreds of young people there on Saturday.

He said: “Without urgent action a long summer lies ahead and what is happening is in clear breach of the Covid restrictions.

“I am conscious that this has been a difficult time for young people, especially on their mental health, but behaviour like this cannot and should not be tolerated, especially as we are going through a fragile Covid recovery.

“The Meadows is now “the place” to go for teenagers, with thousands congregating and clearly overwhelming police, who I have considerable sympathy with and are in an incredibly difficult situation. Large groups are in clear breach of the Covid-regulations and it should be noted that these are not just local teenagers, with large numbers arriving in taxis/using public transport.

“A combination of deterring groups of teenagers from attending plus cracking down on anti-social behaviour for those who do is vital.”

He suggests action based on this outline:

Scottish Labour politicians Daniel Johnson MSP and Ian Murray have arranged a meeting on Friday at noon when they will facilitate discussion among all interested parties. They said: “We have a stakeholders roundtable on Friday at noon where we are bringing together the police, council, councillors, residents associations, community councils, retailers, businesses, the university, student bodies, affected residents, church leaders and others to try and get some action taken to nip this in the bud and commence an action plan for the immediate problems and the longer term issues.

“There have been warnings about the escalating problems in the Meadows and Bruntsfield Links for some time and this was brought to a head with the good weather on Saturday. The Meadows are for residents and everyone to enjoybut it has to be done responsibly and with respect to the surroundings and local community.”

After the events of Saturday, Council Leader, Adam McVey, issued this statement: “In the run up to the Bank Holiday Easter weekend we urged people to be responsible, follow the national guidance and respect and care for our parks. So it was shocking to see what happened in the Meadows last night with people behaving appallingly – fighting amongst themselves and with the police.

“This behaviour was simply disgraceful. I want to thank the local residents for the great community spirit they showed by picking up litter and our street cleansing teams who were out early this morning clearing everything up. I also want to thank the park rangers and police for their work keeping the majority of responsible residents safe. We’ll continue to work closely with Police Scotland to keep our parks safe for all to enjoy and remind everyone to be responsible over the rest of the holiday weekend and through spring and into summer.”

We asked the council Leader to speak to us on Tuesday morning about the problems which arose at the weekend.

Council Leader Adam McVey said: “We’re working with partners to address the issues which contributed to the appalling scenes in the Meadows. We will continue to have further direct dialogue with the police and others to make sure the safety of residents is protected.

“We’re grateful for the swift action by parks colleagues and the police as well as local community leaders for the further offers of support as help. We will utilise all efforts in addressing these issues to avoid a repeat of this behaviour.”

“We’re grateful for the swift action by parks colleagues and the police as well as local community leaders for the further offers of support as help. We will utilise all efforts in addressing these issues to avoid a repeat of this behaviour.”

This is the letter which the Divisional Commander Chief Superintendent, Sean Scott, sent to all elected members in Edinburgh 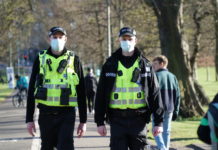