Podcasting is the new wireless, and it is the easiest way to escape for just a while.

Whether you live alone or not, the beauty of the podcast is that it can secure some “me time” for you. With headphones and a phone that walk round Inverleith Park or the Botanics becomes a new world when you transport yourself off with a podcast. It is radio on demand, and not as demanding on your senses as looking at a computer screen.

Some recommendations might open the doors to even more treasure – so if you find something that people absolutely must listen to then let us know and we can spread the word in future articles.

So what is the beauty of a podcast? It allows everyone to relax a bit, and not care if the tech goes a bit adrift, or someone says something they perhaps ought not to have. It is not the time-pressured news style interview when there is no time to say anything except deliver the soundbite even if it does not answer the question, and it is better than a short interview on any news programme as it gets to the rough parts as well as the smooth.

In Radio 4’s Grounded with Louis Theroux who talks to you in such a way that he makes you believe you are right there with him and his guest, Ruby Wax admits to being jealous of Louis. This is a story which takes time to tell, and is much the better for the longer platform. Louis is working from home and with the benefit of Zoom and some audio recording, he catches up with people he has always meant to interview. Lately he spoke to Oliver Stone, the award-winning film director, and he admitted struggling with the technology with Frankie Boyle who is allowed to be himself using what is generally known as “strong language”. What you might not have known is that Boyle is a yoga fanatic.

Another Scot, David Tennant, has recorded two seasons of David Tennant Does a Podcast With…and there are some big name guests such as Dame Judi Dench, Olivia Colman, Whoopi Goldberg, Neil Gaiman and Billie Piper. There is a very interesting hour or so with former Prime Minister, Gordon Brown, on what it was like to run a country, and with Sir Ian McKellen in a bit of a sweary episode with a flavour of that wonderful deep voice.

The BBC’s most popular podcast of last year is Radio 5 Live’s That Peter Crouch Podcast which is now in its fifth series.

There are new episodes released weekly. The podcasts started on 17 February but you can always listen again. The fourth series ended with Peter and the boys at Buckingham Palace with Prince William and the new episodes will talk about football and some will welcome a high profile guest from the world of football.

There are other mini-episodes only available on BBC Sounds. Peter Crouch said: “This series, we’ll be focusing on the fundamentals of football – and we all know there’ll be some magnificently strange twists along the way too.

“I can’t wait to get recording again with Chris and Tom. It’s a great bit of escapism for me and hopefully the nation too, as we come back stronger and continue through the pandemic together.”

If all things American intrigue you then you might do worse than have a listen to the former First Lady. Not that one. Michelle Obama has her own podcast which ran for a short series last year. She has deep conversations wth the former President and members of her family, including her mother. The Obamas talk about their own love story and the challenges of their relationship, which led to counselling which Michelle openly talked about with Oprah Winfrey on another occasion. Interestingly there are full transcripts of the conversations which is not something that usually happens. A lot of work has gone into making this as accessible as possible.

This American Life is a Pulitzer winning weekly public radio programme which has run for 25 years and is hosted by the mellifluous voice of Ira Glass. To give you an idea of how big a deal Glass is, he was once depicted on The Simpsons, and had a voice only role as himself on American Dad! In July 2020 The New York Times bought Serial Productions, owned by Glass and the production team behind Serial, for $25 million. With a wealth of stories on a huge range of topics from selling second hand cars to a love break up and the original 14 minute musical by Lin-Manuel Miranda of Hamilton fame, the podcast was bought. Too good to mention them all. There is nowhere better than to start with the latest episode and then dig back into the archives. If you need help with that there is a New York Times article in which Glass makes some recommendations from the 700 or so episodes. You may be gone some time.

If crime is your thing then do start with Serial which began as a spin off from This American Life. Exposing some of the faults in the US justice system as well as wrapping you up inside a real life crime starting with the disappearance of Hae Min Lee at high school in Baltimore in 1999 it is nothing short of immersive. The series, which began unbelievably in 2014, is hosted by Sarah Koenig who was discovering the same story as the listener at much the same time. The fact that there is audio from inside the courtroom is only one of the ways that our own court system differs. The story has been downloaded a staggering 340 million times. Start at the beginning, and like any good story you will be sad to leave it at the end.

And if you are more musically inclined then there is a huge library of podcasts from Desert Island Discs to listen to. Now presented by Lauren Laverne it was the idea of Roy Plomley in 1942 who is still credited in each new episode. The website has all sorts of statistics from the most chosen pieces of music to the weirdest luxury items the castaway wants to take with them. The archive of podcasts is conveniently arranged n five year segments and is a social history of the second half of the 20th century. It is impossible to pick a favourite episode but looking for some comedy there is one with one half of the Two Fat Ladies, the late lamented, Clarissa Dickson Wright.

And from time to time we host our own interviews on anchor.fm 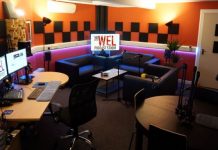