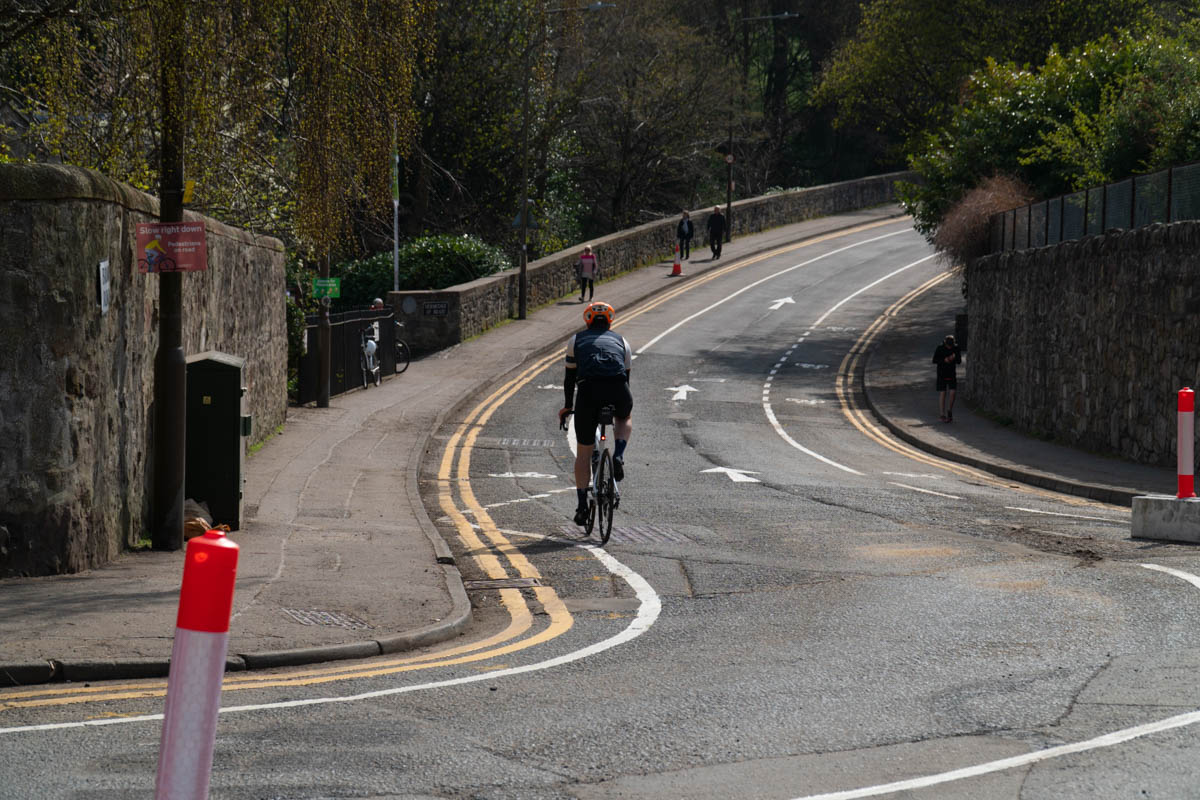 I visited the Braid Road and Hermitage Drive junction today to meet a few people who wanted to talk about traffic arrangements at Braid Road, the closure since last year, and the re-opening to vehicular traffic which is happening on Monday.

The council announced earlier this week that the road will be reopened to vehicular traffic from 19 April – but only one way for traffic travelling south. The initial closure in May last year was part of the Spaces people scheme to allow people to walk, cycle and wheel safety to and from the Hermitage of Braid while being far enough apart.

Now the road will have segregated cycleways and only southbound traffic will be allowed. This was approved by the council’s transport and Environment Committee in January. There will be traffic calming on Midmar Drive, and it is hoped this will manage the return of any intrusive traffic and protect the Meadows to Greenbank Quiet Route.

Council staff have already changed some barriers – but made the mistake of reopening the road yesterday and that had to be closed again. The area was very busy – it was a lovely sunny day – with cyclists, walkers and motorists. Many people, both car drivers and cyclists, were a bit confused by the rearrangements and countless cars had to stop at the barriers and turn around.

The purpose of our article was simply to give various people the opportunity to air their views on the measures. There were plenty of people hanging about the corner having a look a the new layout, one who was very vocal about the fact it should never have been closed in the first place (unfortunately the local resident did not give us permission to use any of that audio). There is no real answer, or at least there will eventually have to be a compromise here when the planned signalled pedestrian crossing is created. For now there were some very much in favour and very much against.

And I must warn you- this is a long listen!

First I met Paul Bailey, a local resident who lives further south up Braid Road, who told me he believed the council is failing to obey the law, that they are relying on the 1984 Road Traffic Act and they cannot do that unless there is a danger to the public. He said: “They are putting in a little bit of extra pavement pretending that that will help you not get Covid. Well of course there is no need for that. They are trying to shoehorn in a scheme which they don’t have to do any consultation on.”

Cllr Neil Ross is a Liberal Democrat councillor who cycled to meet me, having been invited by Mr Bailey. He said: “When Braid Road was initially closed during the extraordinary circumstances of the pandemic with people looking to spend their time during the day visiting places like the Hermitage, I accepted that. But as we are coming out of the pandemic I think we have to rethink this and reopen Braid Road.”

Cllr Melanie Main is a Green councillor who has been campaigning for change in the area for some time. She said: “I immediately rang the Spaces for people team and they had people on the ground last night, overnight, sorting out some barriers.

She explained that there is already a permanent scheme in the pipeline for Braid Road to make it safer for people using it. There is a blind corner for all users and unfortunately the only thing that could be done in the scheme as it stands is to widen the pavement. She said: “I’m very concerned about the safety as it is set up at the moment. However because these schemes are temporary and we do know that officers have been receptive in the past where something needs to be changed quickly they can do that.”

Ali and Michelle Wright live on Cluny Drive and they were anxious to explain that there have always been traffic problems here. Any traffic which is trying to avoid the traffic lights at Morningside uses their road as an east-west thoroughfare. But this has not only been caused by the closure of Braid Road – it has been an area for rat-running for some years now.

And Stella Thomson is a member of Spokes South. She explained that it will take time for people to get used to the new layout. She said: “I think it will be okay when it is done. It is not what we asked for however. We asked for a quiet route to take people from the end of Braidburn Terrace going to somewhere – like the Meadows. That would give us a route to somewhere with high schools that can also be reached.”