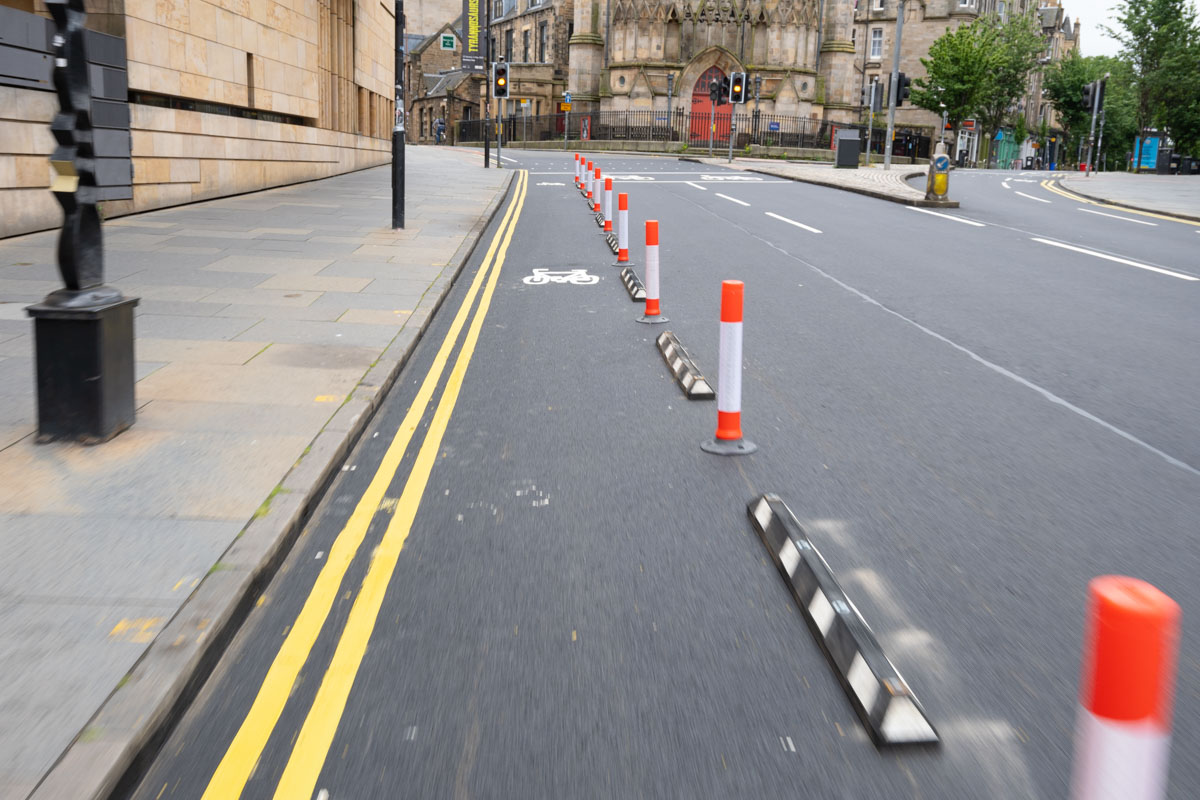 The council has extended the time for responding to its consultation on making Spaces for People temporary measures into permanent fixtures on our streets.

Armed with £5 million funding from The Scottish Government along with the emergency legislation the council was able to put measures in place more quickly, and without just as much red tape as normal. The City of Edinburgh Council has installed almost 40 km of segregated cycle lanes in the last 12 months, they have revised arrangements around 70 schools in the city allow for increased safety. There have been 29 road closures near schools and 54 measures near school gates to make picking up or dropping off children safer.

The intention is to concentrate on removing street clutter and there are a couple of projects which have yet to be fully put in place such as the segregated cycle ways proposed for Lanark Road and Broughton Street. While these measures are in response to Covid-19 they all add to the City’s Mobility Plan, the City Centre Transformation and the council’s Active Travel Action Plan.

Transport Convener Cllr Lesley Macinnes told the Spokes campaign group Spring webinar on Thursday evening that she would like there to be greater understanding around the consultation and also the report which will be produced by council officers for the June Transport and Environment Committee meeting. She said that she feels the positions on Spaces for People have been too polarised, and that it is crucial that people are encouraged to use active travel when they can.

She said: “There must be a modal shift. We have to get people to stop driving so much. The number of miles travelled in a car in Edinburgh has increased by 154 million miles in the last eight years. All of this impacts on the quality of life in the city with air pollution one of the results of congestion. We need to make it safer and we want to focus on creating 20 minute neighbourhoods. In fact in Edinburgh we want to have everything that people need within a ten minute walk from their home.”

Spokes is the cycle campaign group and largely supportive of the active travel measures brought in under Covid-19 legislation. But Dave du Feu of Spokes said on Thursday evening that they also support full consultation on any new measures. However, he qualified that by saying that the increase in traffic over recent years had not involved any consultation at all.

Cllr Macinnes also said that all of the Spaces for People measures are subject to democratic processes in the council. There will be discussion then around which measures might be retained rather than scrapped and all of this will be analysed amid where it sits within the council’s goals. She also explained that until now the temporary measures have been constantly reviewed and changed where necessary. She lamented that there is misinformation around the measures but confirmed that she is “comfortable about the process and where it sits in both Scottish Government process and legal guidance”.

She along with a senior council officer explained that measures such as auto pedestrianisation have been introduced (this means that pedestrian crossings in the city centre work automatically rather than on pedestrian demand), that 3 km of space for exercise has been introduced, that these measures have included road closures as well as cycle segregation. She mentioned some key interventions in Silverknowes Road where there is now a two-way cycle lane and King’s Place in Portobello where parking has been removed, or Maybury Road where a temporary pedestrian crossing allows people from the housing developments nearby access the open countryside by way of Cammo Walk.

The much lauded Greenbank to Meadows Quiet Route was discussed by Ewen Maclean of Blackford Safe Routes. Mr Maclean said that he felt this was even more beneficial than expected and that it has made a huge difference. He concluded it is “quite uplifting”.

You can have your say on the Spaces for People measures on the council website.

The council explained that the plans include:

The consultation is here.

If you would like a printed version of the questionnaire, please call 0131 200 2000 or email street.schemes@edinburgh.gov.uk and we’ll arrange for one to be posted to you.

If you would like it in another format such as Braillie, large print or translation, please contact the Interpretation and Translation Service on 0131 200 2000 or email its@edinburgh.gov.uk quoting reference 20-6815A.