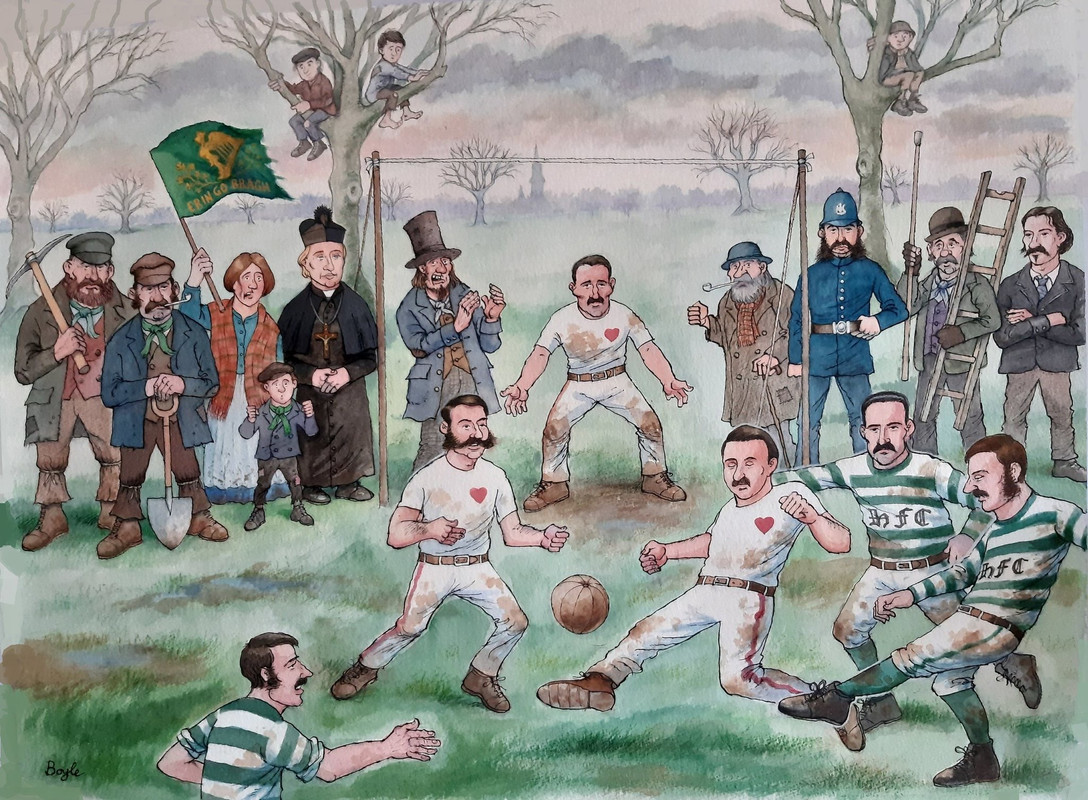 Award winning cartoonist Frank Boyle’s depiction of the first ever Edinburgh derby is highly regarded by supporters of both sides but there is much more to the drawing than initially apparent at first glance.

As always with Frank’s cartoons, the devil is in the detail and it requires several viewings to get the full benefit.

The historic match between the newly formed Hibernian and Heart of Midlothian took place on Christmas Day 1875 in the Meadows and whilst photography was in its infancy, no-one though the encounter important enough to record for prosperity.

Hibs had been formed in August of that year but the Edinburgh Football Association declined their application to join as they considered them to be an Irish team and actually issued instructions to all member clubs that they must not play any matches or indeed even have any contact with the new club.

The players trained hard and played practice games among themselves on the Meadows and eventually Heart of Midlothian broke ranks and agreed to play the fixture.

Frank learned of the game after reading Alan Lugton’s book ‘The making of Hibernian FC’ and decided that the event merited his attention, but it was not just a question of putting pen to paper as he explained: “It was something I had been considering for some time and had already spoken to the historians at both Hearts and Hibs. Tom Wright took me to the east Meadows where the game was played so that I could see for myself. I had a clear idea of the white Hearts strip but there was a dispute about the Hibs’ strip but their first official photo featured the green and white hoops so I went with that.

“I also went to the Central Library to research what the spectators would have worn in those days and the policeman is wearing an accurate City of Edinburgh police uniform. The navies that attended the game as bodyguards were also depicted and looked as though you wouldn’t want to mess with them.

“Some of the players were real people including the two captains Michael Whelehan of Hibs and Tom Purdie of Hearts. I also learned that the Hearts’ keeper Jake Reid only had three fingers on one of his hands and I asked the club Museum Manager Davy Allan if he knew which hand but he didn’t however a few days later he met one of Jake’s descendants who confirmed that it was his left hand.”

Although based in Glasgow, Frank has a large following in the capital thanks to his daily ‘Boyling Point’ cartoons which featured in the Edinburgh Evening News between 1999 and 2015 and topically lampooned the great and the good of the capital and beyond.

Whilst at the News, he won the prestigious Cartoonist of the Year award at the Scottish Press Awards in 2003 and 2006 and also the Trophee d’Honneur at the Tourcoing Cartoon Festival in France and his work also featured on the BBC Newsnight programme and appeared in The Gathering Place, a BBC documentary on the building of the Scottish Parliament and in Ken Loach’s film Carla’s Song.

One of Frank’s cartoons was bought by the National Galleries of Scotland for their permanent collection of drawings and he has had commissions from clients including  Scottish Amicable, IBM, Bank of Scotland, BBC Scotland, Wark Clements, National Library of Scotland, Hibernian FC, Royal Lyceum Theatre,  Friends of the Earth Scotland, Unison Scotland

His work has been exhibited at the Scottish Parliament, the City Art Centre, Edinburgh, the Scottish Football Museum at Hampden and the Scottish Storytelling Centre.

National Convener of the Scottish Socialist Party Colin Fox insisted that Frank’s cartoons were the best thing in the newspaper whilst the late Margo McDonald said that she had the ‘utmost admiration for his work and was ‘chuffed’ to be drawn by him.

Former First Minister Jack McConnell claimed that they were the ‘highlight of the first eight years of devolution’  even though they were occasionally embarrassing and made him cringe but accepted that they always made him laugh.

It’s not just politicians who admire Frank’s work however. He continued: “Rod Petrie has bought a few prints including the one which featured after Hibs were relegated. There was a large demonstration outside Easter Road with the fans having built a large Wicker Man in the car park and Rod inside looking out of the window with his hand on a petty cash box.

“When he got the job at the SFA he contacted me and bought a number of prints for his office at Hampden.”

The Edinburgh derby print along with many others is available to buy from Frank’s online shop.