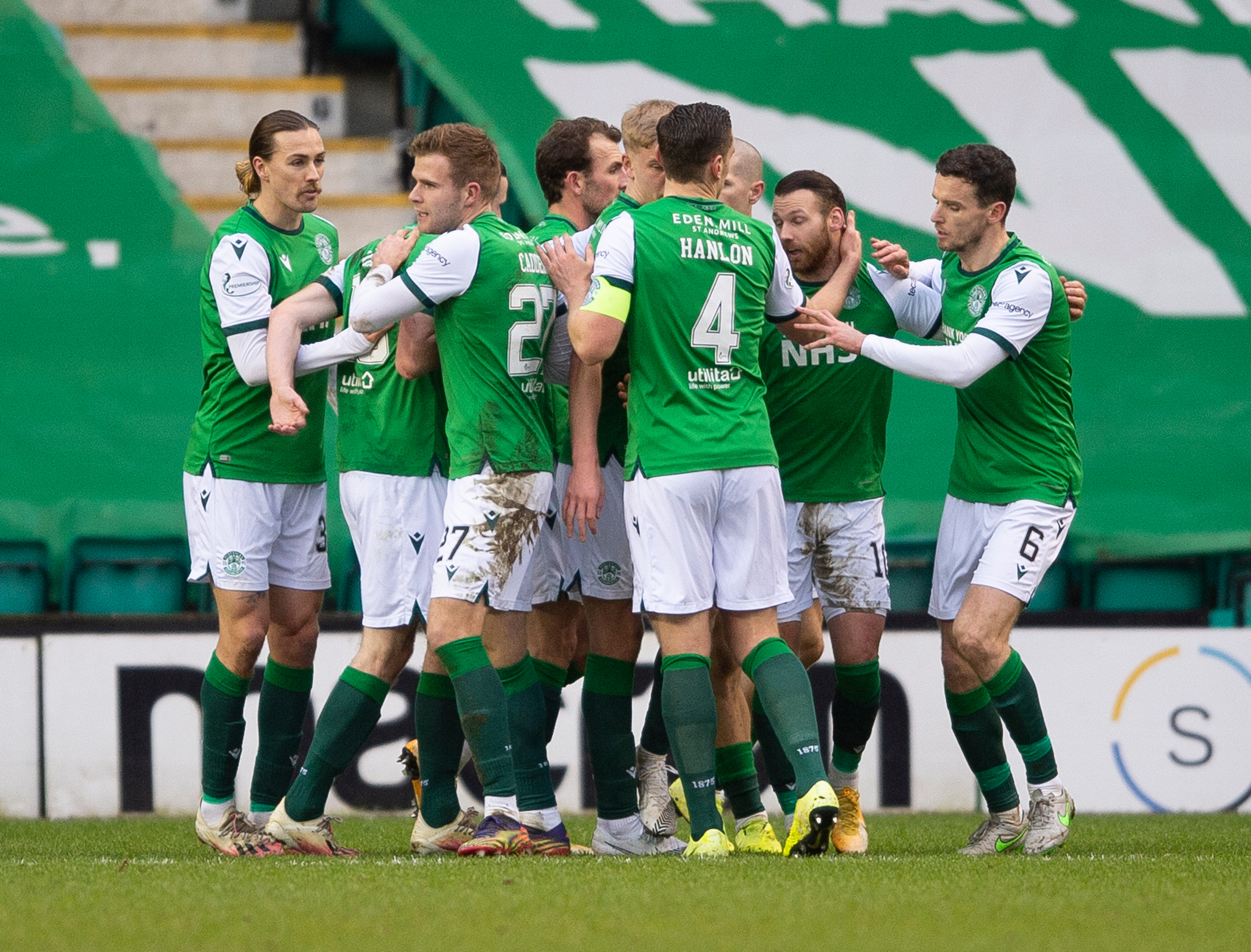 Hibs move five points clear of Aberdeen in the race for third place with a well-deserved 2-0 victory at Easter Road this afternoon.

The game kicked off in freezing cold and blustery conditions and Hibs had a great chance in the opening minutes when Greg Leigh under-hit a back pass allowing Chris Cadden a clear run on goal but the wing-back slipped as he shot and Joe Lewis was able to make the save.

Moments later Paul McGinn also under-hit a pass back from the half-way line but Ofir Marciano sprinted from his box to clear the danger.

Marciano was then called into action to save a first time effort from Ross McCrorie then at the other end a clever throw in from Cadden found Jamie Murphy but his cross was knocked past the post by Christian Doidge under pressure from the ‘Dons defenders.

The visitors had a spell of pressure and Darren McGregor did well to deny Fraser Hornby after misjudging a header in the wind then Connor McLennan had a ‘fresh air’ shot from the penalty spot.

Jackson Irvine sent a perfect through ball to Martin Boyle but Lewis did well to smother his effort.

In the 25th minute Murphy cut in from the left and was brought down by Lewis Ferguson on the byline resulting in referee Willie Collum pointing to the spot. Boyle sent the resultant penalty low into the bottom left hand corner of the net to give Hibs a deserved lead.

Moments later Alex Gogic was clattered from behind by Hornby but with no foul given he had to bravely carry on  and managed a clearing header before going down for treatment to a shoulder injury.

Just before the break Murphy sent a sublime through ball to Boyle, but once again Lewis was able to save the shot with his feet.

Hibs started the second-half on the front foot and Irvine lobbed a great ball to Christian Doidge who controlled it on his chest but Lewis managed to save at the Welshman’s feet.

Gogic was harshly booked for a ‘foul’ on McLennan then Murphy did well to set up Josh Doidge but the youngster was caught in two minds and a por first touch allowed the danger to be cleared.

Irvine took a shoulder or rib injury and was unable to carry on so Ross made a double substitution with Doig accompanying to the stand whilst Kyle Magennis and Lewis Stevenson took over.

Stevenson’s first act was to send a perfect through ball into the path of Boyle who fired a superb right footed strike through the legs of Lewis to double Hibs advantage.

Melker Hallberg replaced Murphy in the 73rd minute as Hibs looked to shore things up but the ‘Dons continued to press forward and were unlucky in the 79th minute when a Matt Kennedy cross was headed on by Hornby but the ball deflected off Paul Hanlon and looped over Marciano but rebounded off the crossbar and Stevenson cleared the danger.

Moments later Boyle broke clear but was tackled on the edge of the box by Shay Logan as he was about to shoot.

“Our work-rate, commitment and how we defended out box. And I thought we showed a lot of quality.”