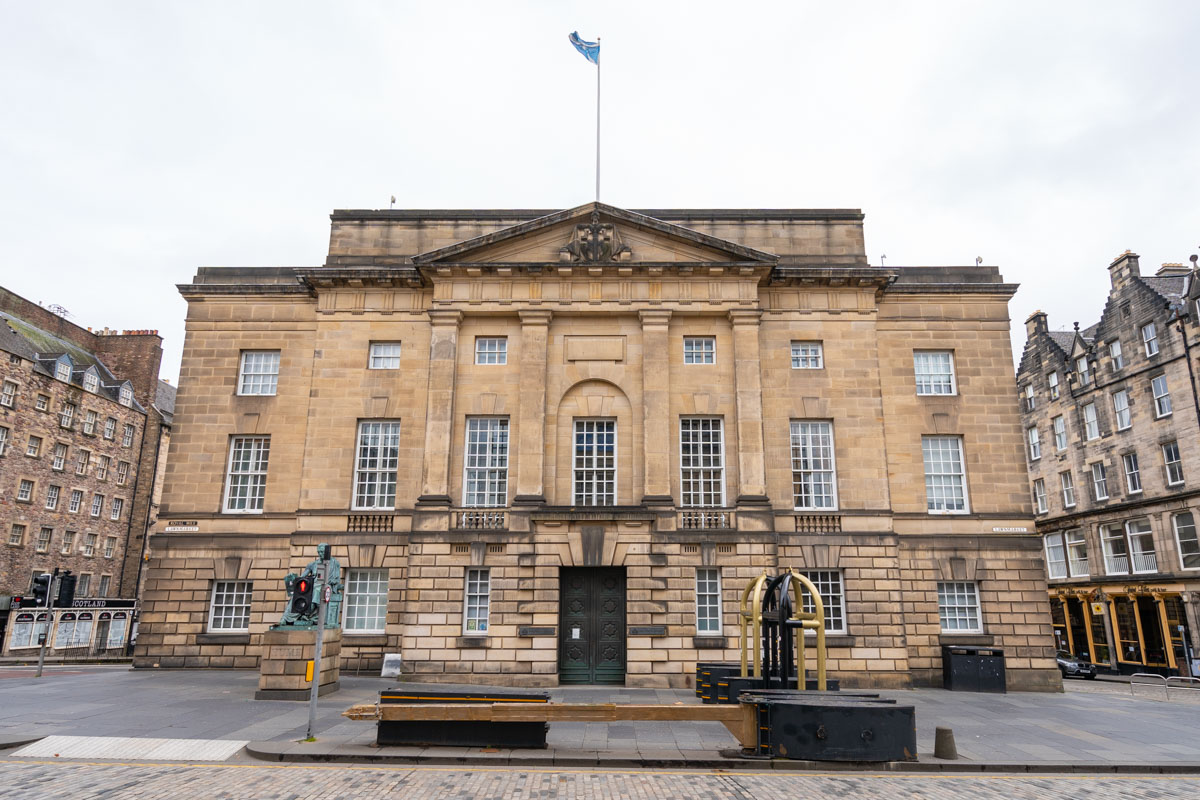 Channel 5 documentary ‘Murder in a Small Town’ which investigates the murder of 14-year-old Jodi Jones 18-years-ago will be broadcast in two-parts tonight then tomorrow at 9pm.

Luke Mitchell who was Jodi’s boyfriend was subsequently convicted of the murder and sentenced to a minimum of 20-years in prison. Since then he has always maintained his innocence and the programme will attempt to cast doubt on the conviction.

Mitchell has had four previous attempts to overturn his conviction. Two were rejected on appeal and a bid to have his case referred to the UK Supreme Court was turned down at the High Court in Edinburgh. Another appeal was refused by miscarriage of justice investigators at the Scottish Criminal Cases Review Commission.

Former Strathclyde police officers John Sallens and Michael Neill were commissioned to re-examine the evidence and have come to the conclusion that Mitchell has been the victim of a miscarriage of justice.

Police Scotland have since issued a statement to the effect  that they are satisfied that Mitchell was guilty and they are not looking for anyone else in connection with the crime.

The evidence produced at the trial was circumstantial however the prosecution argued that take together it made a compelling case and the jury agreed.

Both attended St David’s High School in Dalkeith and began a relationship in March 2003. They were seeing each other most week nights, and at the weekend.

Jodi lived in the Easthouses area of Dalkeith and had an interest in music, particularly the rock band Nirvana. She liked to wear dark baggy clothing. Mitchell lived in the Newbattle area, to the west of Easthouses. He had a similar taste in music and clothing. He regularly used cannabis and was known to be seeing another teenage girl.

Easthouses and Newbattle are linked by the Roan’s Dyke Path, which provides a shortcut between the areas.  Jodi lived around 250 metres from the east end of the path, and Mitchell about 600 metres from the west end. The pair would regularly meet at the east end of the path as Jodi had been told by her mother that she was not allowed to walk along the path on her own.

At 1635 on Monday 30th June 2003 Jodi  used her mother’s mobile phone to send a text message to Mitchell who responded at 1636. A further text was sent by Jodi to him at 1638 but the content of these messages was never discovered.

Jodi left her house at about 1650, informing her mother that she was going to meet Mitchell and would be “mucking about up here”, suggesting that the previous texts were an arrangement to meet up.

Four minutes later Mitchell’s mobile called the speaking clock inferring that he was out of his house.

Around that time a witness recalled seeing a male and female standing near the Easthouses end of the path at the location the pair normally met.

She described the male as wearing a khaki green, hip-length, fishing-style jacket. Its collar was up, and it had a pocket which was bulging. She subsequently picked out a photograph of Mitchell although did not identify him at court.

She was unable to identify the female whom she only saw from the back, but gave a description of someone with black, shoulder length hair, which seemed to be contained like a ponytail, wearing a navy blue jumper with a hood and a pair of lighter trousers, which she took to be a pair of jeans. Apart from the jeans, the description fitted Jodi.

The prosecution claimed that had Jodi left the house and proceeded directly to the path, the she would have been there at the time of this sighting, and asked the jury to accept that this was a sighting of Jodi and Mitchell.

Between about 1705 and 1720 a witness cycling along the path from the west to the east end, heard a noise, which he described as “a strangling sort of sound, a human thing”, coming from the far side of the wall.

At 1732, Mitchell called Jodi’s house but received no reply. At 1740 he called again, and spoke to her stepfather asking if Jodi was in. He was informed that she had left to meet him. The Crown suggested that this was evidence of Mitchell attempting to distance himself from the crime.

Around that time two witnesses saw Mitchell at a gate between the west end of the path and his home address and one of them told the court that it appeared that he had been “up to no good”.

Jodi was due to return home by 2200, but did not then at 2241 her mother sent a text to the Mitchell’s mobile phone.

Mitchell then telephoned Mrs Jones, informing her that he had not seen Jodi and at 2300 a search was launched. Jodi’s family met Mitchell on the path and he discovered her body behind a wall.

The manner of finding the body was the subject of much discussion with family members suggesting the Mitchell appeared to know where Jodi’s body lay whilst he claimed that his dog had found her scent. Witnesses also told the court that he failed to show any emotion at that time.

Jodi had been the victim of a sustained attack and been stabbed multiple times.

A search of the path indicated that Jodi had gone through the break in the wall with someone she knew as there was no indication of a struggle and Mitchell knew the area well.

When questioned he mentioned seeing a distinctive hair fastening which had not been readily visible and was able to name the type of tree near which the body was found, though this would have been difficult in the dark. Also his description of her clothing implied that he had seen her that day later than at school as he claimed.

Mitchell also claimed to have been in his house cooking at the time he was seen with Jodi although his brother gave evidence which cast doubt on this. While not unequivocal, that evidence suggested that Mitchell was not at home at the times asserted in the alibi.

His mother provided a partial alibi however her credibility was called into doubt over evidence she gave regarding accompanying her son to get a tattoo and falsely telling staff that he was over 18. Her account of the events differed greatly from staff in the shop.

Mitchell was also caught out in other lies during police questioning during which time he displayed outbursts which demonstrated his temper and arrogance.

Another witness who spoke to Mitchell that night claimed he told him that Jodi would not be coming out despite having been told by her stepfather that she was on her way to meet him which inferred that he knew she was already dead.

Enquiries into his background established that he expressed an interest in satanism that was reflected in his essays and in graffiti on his schoolbooks. His English teacher was sufficiently concerned to refer the matter to a guidance teacher.

There was also evidence that he was interested in knives. He regularly smoked cannabis. By the time of the murder, he was smoking it every day during and after school.

A witness was traced who claimed that Mitchell previously told him that he could imagine getting “stoned” and killing someone and a fellow pupil recalled that Mitchell had shown him a knife and said that he knew the best way to slit someone’s throat.

At the time of the murder Mitchell owned a ‘skunting’ knife which has never been found despite an extensive search of his house.

His mother bought him another knife and during a subsequent search of the family home many months later, the pouch from the knife, but not the knife itself, was recovered. A number of inscriptions had been made on the pouch: the numbers “666”; an inscription which read “JJ 1989 – 2003”, these being the years of Jodi’s birth and death; and the words “The finest day I ever had was when tomorrow never came”, a quote from the lead singer of Nirvana.

One of the most significant pieces of evidence was that Mitchell had owned and worn a parka-style jacket in the previous months and that he was wearing such a jacket early in the evening of the murder.

The jacket was not found during a search of the house and the prosecution sought to link this with evidence that a log burner in the back garden of Mitchell’s home had been used around 1830 – 1930 and later, at around 2200 that night with an unusual smell emanating from it. The inference being that the coat had been burned to destroy evidence.

Mitchell’s mother then bought him an identical jacket to the one that was missing.

The prosecution argued that the evidence of the missing parka and knife could easily have been negated by Mitchell with an innocent explanation but he had failed to provide one.

Two days after the murder Mitchell purchased, and subsequently viewed, a Marilyn Manson DVD, “The Golden Age of the Grotesque”, which included images of apparently naked women tied together and subjected to a form of abduction. Manson had an exhibition of the same name publicised on his website, which included images depicting the death of the actress Elizabeth Short, also known as “The Black Dahlia”, who was mutilated and murdered in Los Angeles in 1947.

Mitchell continues to deny being involved in the murder and claims that he was framed because he was the ‘local wierdo’.