Join singer Barbara Dickson on Youtube for her first concert, Ballads and Blether on 20 March at 7pm.

This is a one night only opportunity to listen to the award winning artiste. Born in Dunfermline, but now living in Edinburgh she began as a folk singer alongside the likes of Billy Connolly, Gerry Rafferty and Rab Noakes. With hits such as Another Suitcase in Another Hall, and Caravan under her belt, among many others, Ms Dickson is one of the most enduring singers and was recognised with an OBE in 2002. She retains the accolade as Scotland’s best-selling female album artist and has acted in many productions including Willy Russell’s Blood Brothers as well as several TV dramas.

You can also pre-order the CD and DVD of the show which is being recorded at Oran Mor, Glasgow. 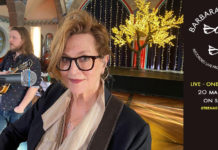 Ballads and Blether with Barbara Dickson