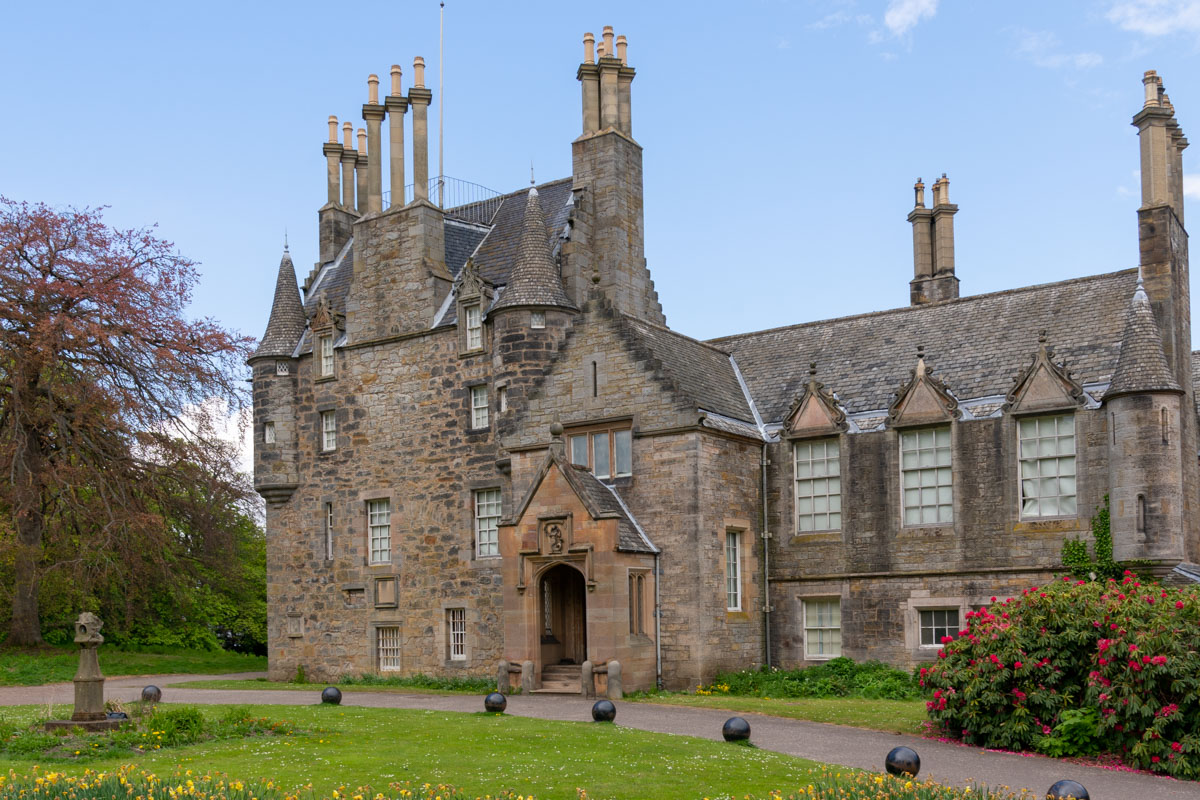 This weekend the electric gate at Lauriston Castle has been jammed open, and will only allow pedestrian access. The gate is broken and seized in position, and cannot be moved one way or the other.

The grounds are open to visitors until 3.00pm and on the Facebook page for the Castle (which is owned by the council) any visitors are encouraged not to park on Cramond Road South.

The council say they will be trying to get the gate fixed as soon as they can.

There are two Facebook pages associated with the Castle.

The first is the Friends of Lauriston Castle Estate – Official Facebook page where people share photos and usually some events too.

The second is the Friends of Lauriston Castle which David Baker runs. Mr Baker has raised many concerns with the council in the last year or more. Most recently, he wrote an open email to the councillors who are also trustees of the Castle on 31 December 2020.

The council has determined that this email has been largely responded to and is recommending the matters raised by Mr Baker to be closed when it comes up on the agenda at this week’s Finance & Resources Committee.

We have asked Mr Baker for his comments on any answers he has received.

This is the email he sent:

This is an open email that will be published on www.facebook.com/groups/787704665301389 that has over 650 membersTo say 2020 has been a disappointing year is an understatement. Coronavirus aside.

What has been established

CEC Do Not Own Lauriston Castle – only the Trustees have title, not as their personal property but as people who take responsibility for managing money and/or assets that have been set aside in a trust for the benefit of someone else.CEC have not been Delegated or been Authorised to control and manage Lauriston Castle and Grounds.

It is irrelevant that services/work are carried out via third parties. They relate to Lauriston Castle and by default directly the Lauriston Castle Trust. A full-time Steward, a part-time Steward and Curator services were provided as were repairs. They do not appear in the accounts. What else? Does this not fall within the Money Laundering provisions?

Conflict of Interest The croquet Lawns/Japanese Gardens/Gardeners Lodge House use relate solely to City of Edinburgh interests. Mr Reid was a golfer and neither he or Mrs Reid played croquet. I see no connection to the collection left by the Reid’s. Nor did Frank Little when I asked him last September.

How are the alterations made connected to the collectionLauriston Castle Collection/Gardeners/Curator The collection has been treated as a closed collection by the Trustees, denying the opportunity of adding to it.Insufficient gardeners and no full-time Curator.It appears that the Trustees have significantly breached the terms and conditions of the Trust.

Reid’s and Friends Gravestones “The Trustees shall provide perpetual care and upkeep the monument to William Davidson Barton, William Robert Reid and Mrs Margaret Johnstone Reid and the monuments of Dalgleish and Knox in the Lauriston Castle burying ground in Cramond Churchyard and for keeping in perpetual repair the headstone in Dean Cemetery where William and Sarah Reid are buried.”

This has not been done and is yet another a disgraceful breach of the Trustees responsibilities.Where is the headstone in Dean Cemetery where William and Sarah Reid are buried?

National Architecture on and in the grounds of Lauriston Castle 17th century Healing Well and Lectern Sundial, Victorian Glasshouse, Gardner’s Lodge, inscriptions & stonework in the grounds of the Castle itself have been allowed to deteriorate/be vandalised and not restored.

Inscriptions and carvings on the walls of the Castle are crumbling away. Water damage is eroding the balcony and elsewhere.All taking place over many, many yearsThese are of National importance. Funding could have been obtained from various external organisations such as Historic Environment Scotland/Lotto/Public donation appeal.It has been reported that circa £70,000 of City of Edinburgh funds were spent restoring the Victorian Glasshouse about 7 or 8 years ago, yet today it is in a disgraceful state on brink of collapse. Who carried out an inspection of work carried out? There is something seriously wrong if such an amount was spent on the glasshouse. There are other examples of potential misappropriation of monies.Access to the inside of the Castle and outbuildings was sought last September. Despite there being a window of opportunity between October last and Mid March this years, access has been denied. This has only increased concern that all is not well inside.

Advertising The advertising in the grounds clearly indicates CEC own, manage and control Lauriston Castle. CEC do not own, nor have authority to manage/control.The Trustees were given till 31 December 2020 to change the advertising. They have not. The matter will now be passed to the Advertising Standards Authority.

Glasshouse & Italian Garden Both are being used by the gardener to grow crops & tomato’s .

The Health and Safety Executive have already brought to the council’s attention that whilst the Glasshouse is in the current state, it should not be used.Why are you still breaching health and safety law (and have been doing so for years)? When will all activity in the Glasshouse stop and items be removed?

People regularly visiting the grounds tell me that the gardener is using the flowering area in the Italian Garden to grow crops. This must stop immediately and winter flowers be planted.

The fencing around the Glasshouse is not secure.

Pond This is historically important feature. Please explain why the pond has been left untouched for over 10 years. This has led to it’s current dangerous state and health hazard.

A grey heron regularly visits the pondThe grapevine indicates the council are considering filling in the pond. The Trustees have presided over the demise some of Scotland’s historic monuments in Lauriston Castle, Glasshouse, Healing Well, Lectern Sundial, plaques. To wilfully destroy another is unacceptable and must not happen.

Please let me know when the pond will be restored to it’s former glory.

Toilets Despite Mimi’s opening, the toilets remain closed. Is is not possible for the toilets to fall under the control and COVID care of Mimi’s?

The consequence of the toilets being closed is people are using the grounds to urinate and worse. A Health & Safety issue.

Japanese Garden Over many years now, the Japanese Garden has been used by people as an area for drinking alcohol drug taking and vandalism. The police have been called out many times. When will the Trustees stop colluding with the offenders and assist the police by restoring the functionality of existing CCTV and installing covert CCTV?The Japanese Garden is a mess. When is it going to be restored to look like a Japanese Garden?

BBQ Area The area that has been allocated is in the path where people and animals move. It is a Health & Safety hazard and will be reported as such. Signs are far too small.

Why was there no local public consultation?

Broken Branches Hanging High in TreesI brought to Frank Little, Museums & Galleries manager and Frank Ross, Lord Provost, attention, a year ago and again this year, that there were sizeable broken branches hanging high up in trees that may fall on Children/Adults/Animals causing injury.

I have removed one by using a long tool to bash it down.

When will you arrange for all the trees in the grounds of Lauriston Castle be inspected and remove all these dangerous branches? Thereafter a regular inspection must be made and any danger removed.

Trees that do not get the right nutrients will gradually become weaker. When weakness occurs in a tree, that tree will become more susceptible to disease, pests, and even damage from weather events. Evidence of this can be seen in Lauriston Castle – mature trees and branches have suffered weather damage.

Adequate management has not been carried out. Why not?

Excessive growth needs to be removed. This will go some way to restore the grounds to that intended by the Reid’s. When will this be carried out?

The trustees need to take on board the grounds of Lauriston Castle are gardens with trees, not forests.

When removing the ivy to create France’s memorial garden, I found the area to be completely sterile. No insects, despite digging 2-3 feet deep, no worms. Now there are insects, worms attracting bees, other insects and butterflies.

The grounds have been badly managed over a very long time. Ivy has been allowed to spread, suffocating the existing habitat, even wrapping itself around trees to the top. Brambles have be unkept, allowed to overspread producing poor fruit.

Jim, the Gardener, has told me that Graeme Craig moved from IT to Gardens & Grounds but had/have no horticulture experience/qualifications. Is this true? What experience qualifications does he have, over what period?

Rubbish BinsI identified the rubbish bins as a rat attraction. Environmental Health agree. They still have not been replaced/fixed?

Paths The paths in the wooded areas need upgrading to allow disabled and able bodied people to move through all year round.

When will this be carried out?

VehiclesThe car park is inadequate and needs to be extended or separate parking area created on the opposite side. The entrance/exit is a dangerous area to people, animals and vehicles. A separate entrance and exit is essential. A separate public/animal access needs to be constructed.

Direct Face to Face CommunicationI have asked twice for the opportunity for F2F talks with you, the Trustees. So far you have not agreed to this. I realise that under COVID 19 restrictions it has not been possible to meet. However it is possible to have a zoom meeting.

Other MattersThose reported in our presentation to Frank Little in September 2019 and subsequently not mentioned in this email also needs to be addressed.

Security to raise FundingHave monies been obtained on the security of Lauriston Castle? If so, where has that funding been applied?

illegal activity by CEC employeesIt has been established that Graeme Craig had no authority I consider his action to be unlawful, vindictive, threatening and an abuse of power in public office. Over the past 14 months I have been raising many issues of mismanagement with the Trustees of Lauriston Castle which Graeme has been responsible.Two other employees have been involved in illegal activity.

All three will be subject to formal complaint in the new year via yourselves. One has already been made via CEC customer services who appear to have ignored it.

May 2021 be a Lauriston Castle Trustee action year.