Proposals to demolish a 19th-century hotel and replace it with student flats are set to be rejected by Edinburgh City Council.

The developer’s plans would mean that the hotel, which dates back to 1870, would be replaced with a five storey student accommodation block with 103 bedrooms.

So far, 98 objections have been lodged with the council, along with 28 letters of support.

Objectors have raised concern over the perceived over-provision of student accommodation in the area, as well as the need for affordable housing in the area, and the size and scale of the proposed development.

Supporters of the proposals say the students will bring economic benefits to the area, and that making bespoke student accommodation available will reduce the demand, and therefore the cost, for rented flats in the area.

A design statement, submitted by capital-based architects 56three, reads: “The house operates as a hotel and restaurant, with four ensuite bedrooms, customer lounge, dining and bar.

“The house has had numerous alterations and extensions over the years, notably the conservatory style restaurant to the south and back of house service areas to the east and north.

“The hotel is currently closed but was previously operating on an adhoc basis for private functions prior to the coronavirus pandemic.

“The kitchen and dining facilities were also previously closed to nonresidents.

“The owners have reviewed the business model for the hotel and have concluded that the retention of the existing house is not viable.

“The inflexibility of the existing house does not lend itself to suitable conversion to provide sufficient, modern facilities to be competitive within the Edinburgh service industry.

“The house provides a limited internal floor area compared to its large plot size. We have reviewed options for extending the building however due to the small scale of the house and its position on site there is limited opportunity to provide a suitable increase in density.

“The proposal is to demolish the house to make way for a new purpose built development. The house is not listed and there is limited architectural merit to warrant retention.”

The application is set to be deliberated on by councillors at Wednesday’s development management committee meeting.

However, council planning officers are recommending the proposals be refused.

A report, sent to councillors ahead of the meeting, reads: “The principle of student accommodation is acceptable in this location and the development will not result in an excessive concentration of students in the locality.

“However, the proposal is not of an appropriate scale, form or design and will not draw from positive characteristics of the surrounding area.

“The features worthy of retention within the site have not been identified, incorporated and enhanced through the proposals design.

“The development will have a damaging impact upon the protected trees within the site.

“Whilst adequate levels of cycle parking will be incorporated on site, the proposed cycle stores will not be located in suitable locations and will not be completely weatherproof and secure.

“The proposal does not comply with the Local Development Plan and there are no material planning reasons to justify approval.

“There are no material planning considerations which outweigh this conclusion.” 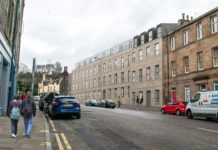