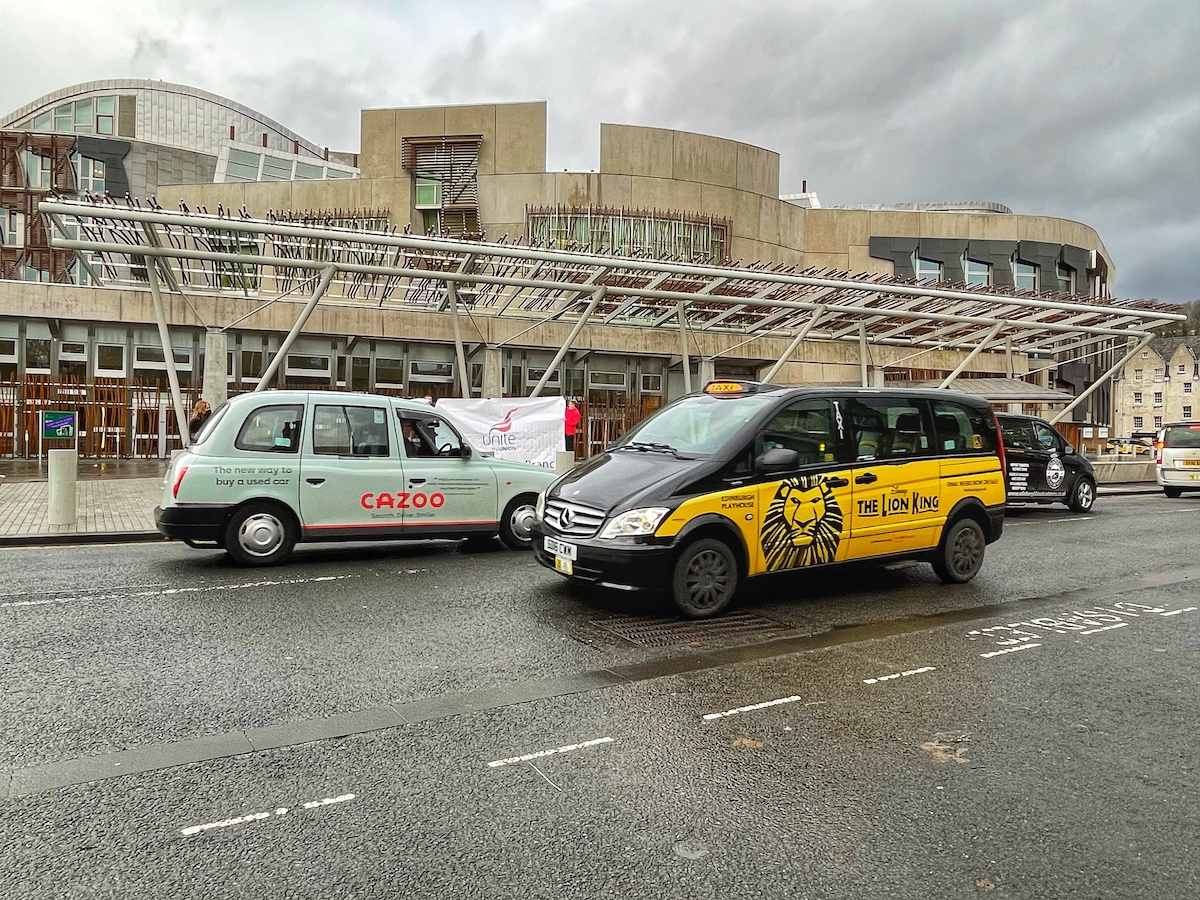 The drivers staged their protest at the same time as the Rural Affairs and Connectivity Committee was meeting at Holyrood.

They recently surveyed their members and from a response of over 200 taxi drivers from all over Scotland say that over a third of drivers have been unable to access any government support during the pandemic.

The union estimates that there are 36,000 taxi drivers in the country and say that the majority have suffered financial losses during the lockdown with no support available.

The local branch say that they want a financial package similar to that in Northern Ireland, which is a specific grant tailored to taxi drivers.

Richard Leonard welcomed news a couple of weeks ago that financial aid would be forthcoming. The First Minister announced a £30 million discretionary fund for councils to deliver extra business support – including taxi drivers. Mr Leonard had raised the matter with Nicola Sturgeon in a letter.

Since then there has been no settlement offered.

Edinburgh Cab Branch Secretary Jacqueline Dunn explained previously: “We are the unsung heroes. Some drivers are still doing Covid patient runs or driving wheelchair users around the city. If we ceased to exist how would they get about? Our passengers and city need us as we need them, we are a vital public service and sadly we have been brushed aside. In Glasgow councillors there have supported cabbies by tweeting the Scottish Government for help. There has been tumbleweed from ours!”

Ms Dunn said today: “Unfortunately due to Covid we have lost about 85% of our work. We have no support coming from local authorities or government and our taxi trade is in desperate crisis. Today we are asking The Scottish Government to give us that help that we desperately need. We have drivers who are basically on the poverty line. Only a small percentage of drivers can access government grants but because we don’t have premises that is not available to us. There is the self employment scheme but owners who still have fixed costs do not have the help that the owners of a pub or a restaurant would get. Some drivers go out – maybe from 6 in the morning until 6 at night and walk away with about £50 if they’re lucky.

“Usually this time of year is very busy with Christmas parties and tourists so there is a massive drop. We ask the Scottish Government to sit down with us and realise that our business is unique, and that we need a tailored grant system for our drivers.”