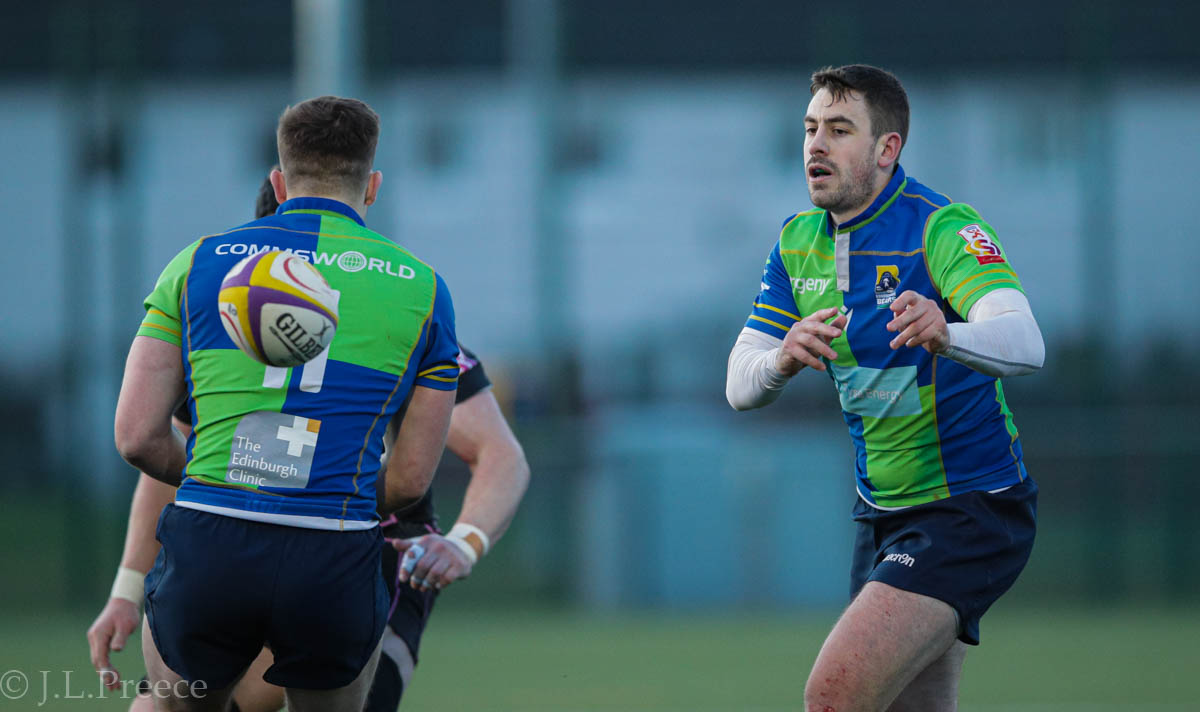 The youngest son of the former Scotland and British & Irish Lions scrum-half, Roy Laidlaw, Chris Laidlaw is a Scotland Club XV International stand-off in his own right.

Chris, 30, captain of Boroughmuir Bears in their inaugural season of the FOSROC Super6 and a Scottish Cup winner during his time at Meggetland, is taking a year out of the game in 2021 – to run 12 marathons in 12 months!

The ’12 in 12′ quest will begin on New Year’s Day when he will set off from the Boroughmuir clubhouse at 10am to pound the pavements for some 26 miles.

“Like most rugby players I’ve probably done some daft things to celebrate New Year in the past. But this one matters an awful lot to me,” he said.

“I’ve never run a marathon before. The furthest I’ve done is a half marathon, but I reckon if I can get through the first one and get the miles in during the training then I’ll be fine, I hope!”

Depending on if the coronavirus pandemic eases, Chris hopes to sign up for some major events in the marathon calendar, such as Edinburgh in May, Berlin in September and Loch Ness in October.

Otherwise he will plot bespoke courses around events that meant a lot to his family, such as Jed-Forest 7s or Jedburgh’s summer Callants festival.

It’s a mission that’s been borne out of sadness.

Chris mum’s Joy died earlier this year, while a few months ago dad Roy made public that he had been diagnosed with Alzheimer’s.

Chris explained: “This year has been extremely hard losing my loving mum to cancer during the first lockdown followed by my dad’s diagnosis that he is suffering from Alzheimer’s.

“I have found it very hard to accept both, however I now feel ready to take on this amazing challenge and raise awareness and funds for three charities which are close to our family.”

The charities are the Murrayfield Injured Players’ Foundation; Marie Curie; and Alzheimer Scotland.

“I personally have received support through a long-term injury along with my older brother Scott. The Foundation is now helping provide support for Dad and has provided long-term assistance for Eddie Renwick of Jed who suffered a catastrophic injury many years ago.

“Marie Curie, which supports people living with a terminal illness, were outstanding at the end of my mum’s illness and provided amazing support and care to mum and us as a family.

“The contribution they make to people’s lives in the most difficult of times is amazing and one we are so grateful for.

“Boroughmuir, where I have played for the past seven seasons, also have strong links to the charity and have done many events over the years, so I look forward to teaming up with them again for this challenge.

“Alzheimer Scotland, Scotland’s national dementia charity, provide fantastic support to people living with dementia, fund vital research projects and provide support to families who are supporting their loved ones through this tough illness.

“Since reaching out to them about my challenge they have been nothing short of amazing and have pointed me in the direction of some great support networks for me and the family and I look forward to working with them through this challenge and beyond to support dad as best we can.”

Chris, who has worked in rugby development with both the Dunbar and Boroughmuir clubs, and is now a coach with the Edinburgh Rugby Academy, will be running six days a week to build-up for the first marathon and thinks a time of around four-and-a-half hours is attainable.

You can support his fund-raising via: https://www.justgiving.com/crowdfunding/12in12in21 and if you’d like to run along with him during some of his ad hoc marathons Chris would welcome the company.

Ian Rankin, chairman of the Murrayfield Injured Players Foundation, said: “I’ve done some marathon cycles for MIPF in the past but what Chris is planning takes things to a new level.

“For sure it will test his endurance but he’s very much a chip off the old block when it comes to taking on a challenge.

“We’re very grateful that Chris wants us to benefit from his compassion and drive and would urge all in the rugby community to get behind him.”

“We are incredibly honoured that Chris has chosen to support Alzheimer Scotland for his inspirational 12 marathon challenge, starting on New Year’s Day.

Throughout lockdown our services and support have adapted quickly and innovatively to be there for people living with dementia and their families and carers, who need us more than ever. Thanks to fundraisers like Chris, we can continue providing vital support now and beyond the pandemic.

We are sorry to learn of Roy’s diagnosis and commend Roy and Chris for speaking out to raise awareness. We can’t wait to follow Chris’ marathon journey and support him through his challenge.”

“What a fantastic challenge Chris has set himself and I hope Scottish people rally round as it’ll be no mean feat.

“In the current climate, charities have felt the pinch, and we’ve has to adapt the way we fundraise. It costs Marie Curie £250,000 a week to operate in Scotland – across our two hospices in Edinburgh and Glasgow and community nursing services.

“It’s through fantastic fundraisers, such as Chris, that we can continue providing much needed support to terminally ill people and their families.”