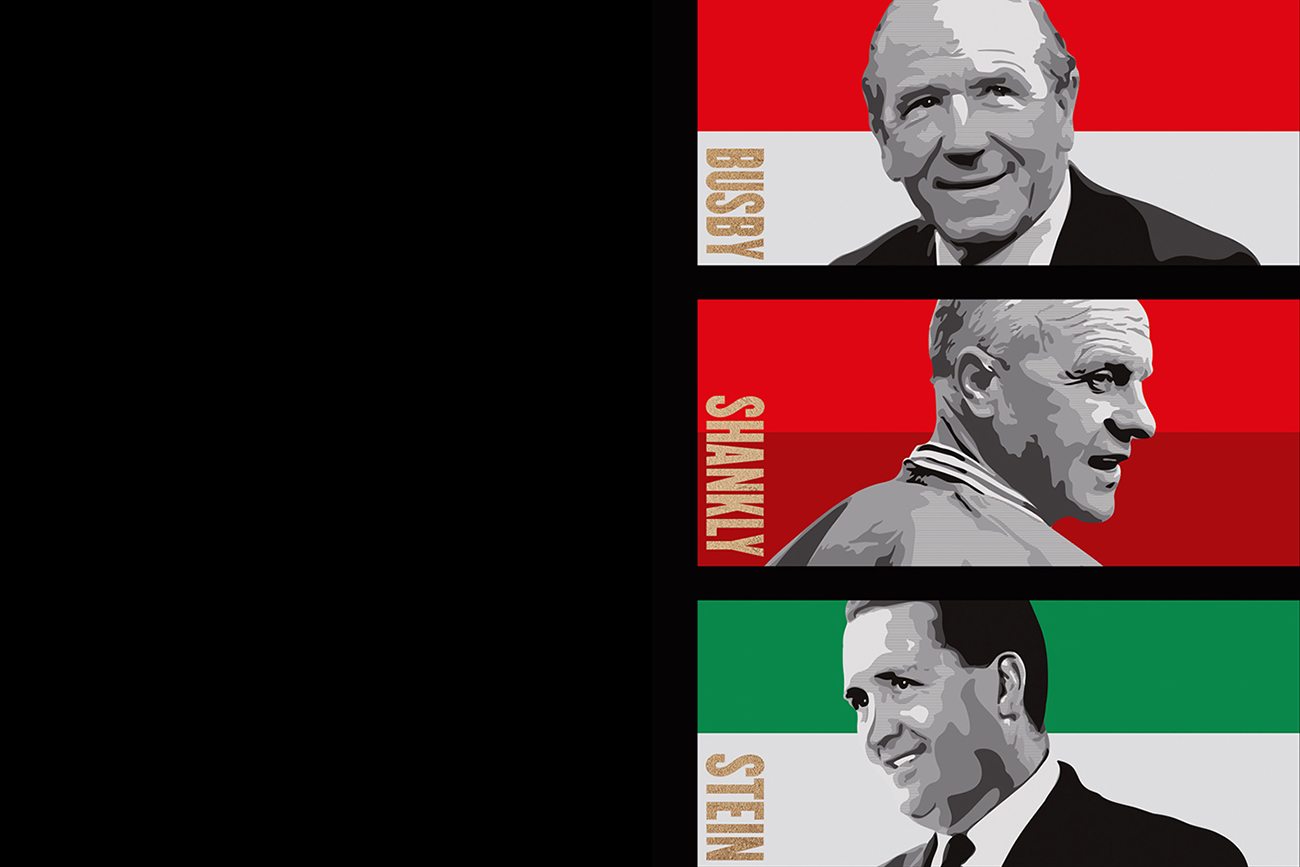 A new DVD and digital download has been released telling incredible story of how three men born in the central lowlands of Scotland within 30 miles of each other, grew up to become lifelong friends and three of the most influential men in football history.

Matt Busby, Bill Shankly and Jock Stein lead their clubs – Manchester United, Liverpool and Celtic – from the doldrums to achieve unimaginable success, captivating millions of fans and becoming three of the most famous sporting institutions on the planet.

Coincidentally all three had connections to Hibs.

Matt Busby played for the club during the war years and once famously said: “I did not need any persuasion to play for such a great club, the Hibs result is still one of the first I look for.”

At that time he was in the Army Physical Training Corps based in Kelso  and played 37 games for Hibs between June 1941 and February 1943, scoring five goals (including one against Hearts) and was in the 1941 Summer Cup winning team. He also wrote the foreword for 100 Years of Hibs.

After the war Matt took over as manager of Manchester United and brought his team to Easter Road to play a testimonial for his former team mate Gordon Smith.

Despite being widely recognised as the most outstanding team in England since the war, Manchester United lost 7-3 to Hibs in a thrilling encounter that was described at the time as the finest exhibition of football artistry ever witnessed.

United left the field at half-time leading 3-2. Eddie Turnbull scored both of Hibernian’s first-half goals. In the second-half however, it was a different story. Strikes from Ormond, Reilly, the man-of-the-moment Gordon Smith, and another from Turnbull gave the Scottish League Champions an emphatic victory.

Jock Stein was the Hibs manager for one season in 1964 taking over from Walter Galbraith.

His influence on the players was immediate and a  3-2 victory against Aberdeen in the Summer Cup final at Pittodrie, a game that had been held back from the end of the previous season due to an outbreak of Typhoid in the Grampian area, gave the long suffering Hibs fans something to cheer about at last.

With no competitive European football in the city that season, Stein persuaded the board to invite the mighty Real Madrid to play a challenge match in the capital and around 30,000 spectators paid to see the Spaniards beaten by a Scottish team for the first time.

A few days later, the same eleven beat Rangers 4-2 in Glasgow, the visitor’s first league victory at Ibrox since 1952 and Hibs became the most talked about side in the country.

A famous victory against Hearts at Tynecastle on New Year’s Day 1965 with Willie Hamilton scoring the only goal of the game from an almost impossible angle near the bye-line, followed by a 6-0 victory against Falkirk at Easter Road the following day, lifted Hibs into second place in the league.

Later that month a Neil Martin goal secured Hibs’ first league double over Rangers for 62 years and the jubilant home supporters in the 45,000 crowd were convinced that the title and potentially the Scottish Cup would be returning to Leith.

Hibs had been drawn to face Rangers at home in the third round of the Scottish Cup and with the sides were level at one goal each with just two minutes remaining Hamilton scored to secure a memorable victory.

On the Monday morning however a giant shadow was cast over Easter Road when Stein left to return to Parkhead.

Since taking over less than twelve months before, his time as manager had been nothing short of phenomenal. Of the 37 competitive games played, 25 had been won with six drawn, 88 goals scored against just the 37 conceded.

Coincidentally he was succeeded as manager at Easter Road by his great friend Bob Shankly, brother of the ‘third king’ in the film, Bill of Liverpool fame.

Bill actually brought his Liverpool team to Easter Road on 9th December 1970 in the third round of the Inter Cities Fairs Cup. After a hard fought encounter, Liverpool returned to Anfield with a 1-0 victory thanks to a goal from John Toshack.

Two weeks later Shankly’s Liverpool won the second-leg 2-0 with goals from Steve Heighway and Phil Boersma. They eventually lost in the semi-final to winners Leeds United.

Featuring stunning archive footage from their greatest victories, this story is about more than three men. It is about The Three Kings – the makers of modern football.

The DVD and digital download option is available now.

Six by Nico is off to China