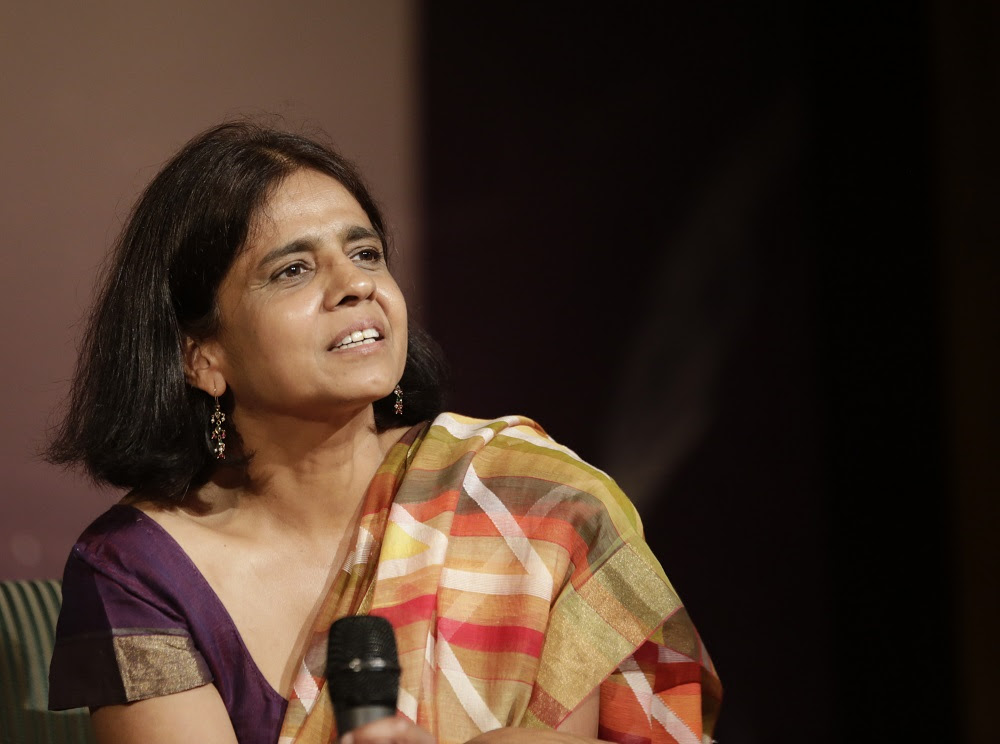 The Edinburgh Medal, which recognises the men and women who have made a significant contribution to the understanding and well being of humanity, this year has been awarded this afternoon to Sunita Narain.

Sunita Narain is a Delhi-based environmentalist, activist, author, Director General of Center for Science and Environment (CSE) and editor of the fortnightly magazine, Down To Earth.

The physical award was handed over by Jan Thompson the Acting British High Commissioner in Delhi in a lovely, leafy garden. This ceremony is a great example of the way to use an online platform, joining everyone from various corners of the world without the use of a single airmile. Given that the medal address was all about climate change, that is very appropriate.

The Rt Hon Lord Provost Frank Ross welcomed delegates virtually on the Edinburgh Science YouTube channel. He reminded us that Covid-19 is not the first epidemic or pandemic of recent years, with HIV Aids and Ebola as well as a flu epidemic in 2009 on that list too. He said: “In 2017 the recipient of the Edinburgh Award Peter Piot pointed out the lessons to be learned from HIV/Aids and Ebola which had been the focus of his work. He emphasised the vital importance of good public health as the critical defence for all pandemics.

“Covid-19 has been a vivid demonstration of both the general health of the public and properly funded public health systems.”

Dr Deborah O’Neill the founder, CEO and Scientific Officer of NovaBiotics, a biotechnology company developing new medicines to treat infectious disease including Covid-19 delivered the oration. She said this year’s recipient of the Edinburgh Medal is quite literally a ‘force of nature’.

She said: “Sunita has been described as an environmental activist – well I would agree that she is action-driven, a pragmatist and an individual focused on actions and outcomes, not just theory and rhetoric.

“One particular area where her influence is exemplified is highlighting the environmental and potential health impact of pesticide use in food production in regions with agricultural systems which may lack the capacity and means to manage the toxic fallout of chemically intensive agronomy.”

Dr O’Neill explained that Sunita Narain has received many honours during her career and said:”She has also been named as one of the 100 most influential people in the world by Time Magazine.”

Ms Narain said: “I’m delighted to be here to accept the Edinburgh Medal for 2020. I’m only sorry not to be there physically in your beautiful and gracious city which has given me this honour and privilege.

“The Edinburgh Medal for 2020 is in my view a reminder of our tumultuous times and the need to make transformational changes in our world.

“It is clear that climate change could not happen at a worse time in human history.

“Every year we are told it is the hottest year till the next year comes around. It is getting worse year after year. From forest fires to increasing frequency and intensity of storms to blistering cold waves and spiralling heat.”

Ms Narain explained how delaying taking any action on climate change meant that we had run out of time, and that it would always disproportionately affect the poor in the world. She explained that it is the poor who are at the frontline of the devastation from both the pandemic and climate change even though they did not create the emissions which contribute to the climate change which so affects their lives. In India this year apart from Covid-19 there have been floods because of ‘extreme rain events’ and attacks from locusts.

She criticised the use of the term net zero which means that we will not emit more than the planet can absorb, saying that it has not been calculated what this will actually mean. She claimed: “We have massively transgressed the natural boundary and by saying we will be net zero in 2050 it seems to be an easy sell. There is some comfort in saying this because it staves off the inevitable pain – it pushes the action to the next generation and after. We cannot buy ourselves out of this crisis. We need to act and action has to be transformational.”

During the pandemic, our lives have been disordered and disrupted at a scale we had never imagined and Ms Narain says we need the same scale to fix what is broken in our relationship with nature.

She concluded: “The future, like never before, is in our hands.

“Nature has spoken and we must speak gently back to her. Tread lightly on earth has to be the way for the future.”

Dominic Fry Chair of the Board of Trustees at Royal Botanic Garden Edinburgh (RGBE) gave the vote of thanks.