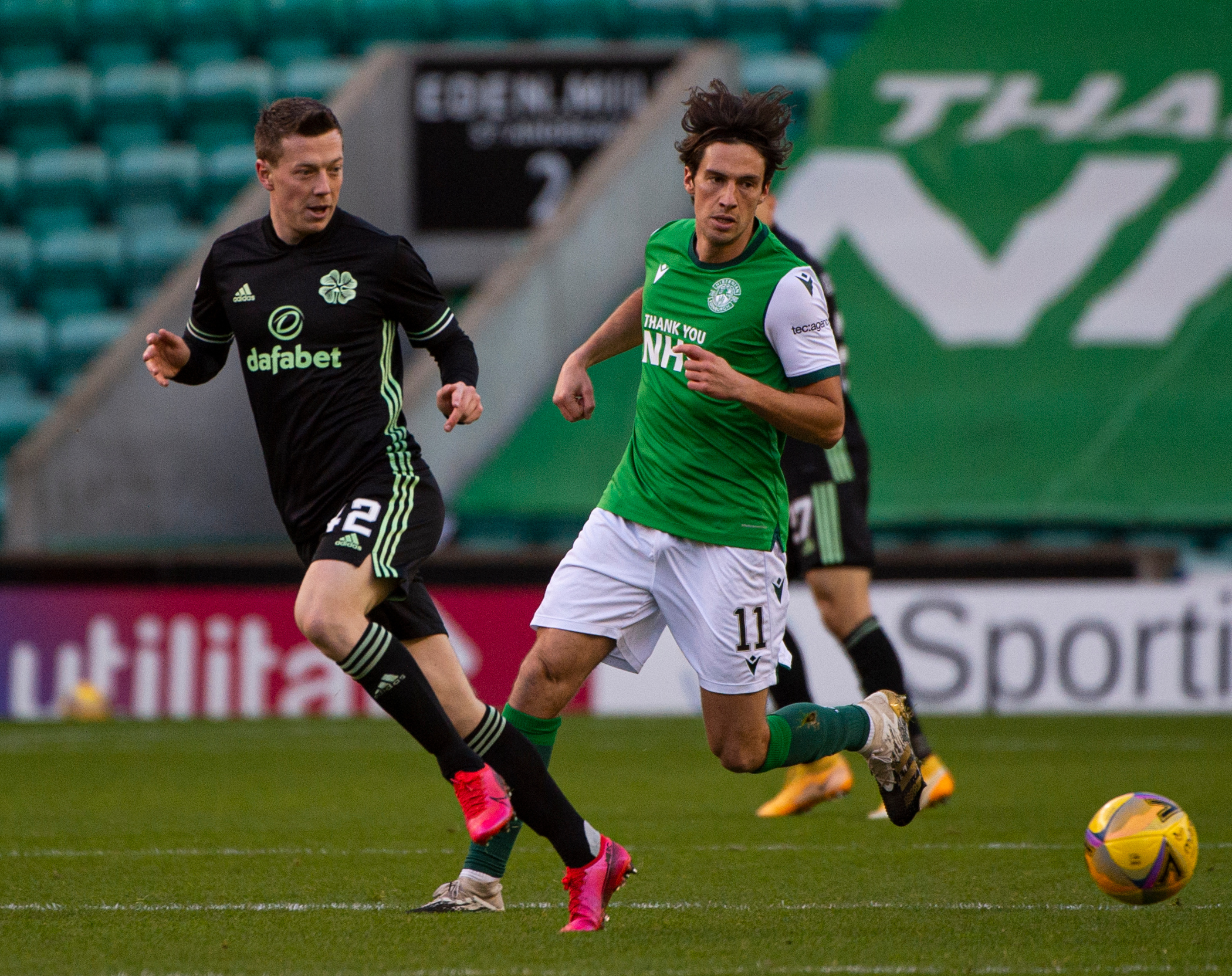 A last minute goal denied Hibs a memorable victory over champions Celtic in a dramatic hard-fought but highly entertaining 90-minutes at Easter Road this afternoon.

Christian Doidge who missed last week due to suspension rolled his ankle10-minutes before training finished in Friday and was not listed in the squad but Ross hopes to have him available for the visit of St Johnstone on Tuesday.

There  was a pre-match scare as to whether Porteous would be permitted to take part as eleven unnamed members of the Scotland Under-21 squad were forced to self-isolate due to a Covid scare however he was cleared to play. Coincidentally Scotland team mate Alan Turnbull missed the game after testing positive for the coronavirus.

There were a number of familiar faces in the visitors’ party, former Head Coach Neil Lennon and former players Scott Bain, Scott Brown and Leigh Griffiths.

Celtic had the better of the opening exchanges and in the fourth minute Mohamed Elyounoussi cut in from the left but Ofir Marciano did will to hold his shot then moments later Kristoffer Ajeti fired high over the bar from the edge of the area.

A superb through ball from Stevie Mallan set up Martin Boyle but Ajer appeared from nowhere to block his goal-bound strike and the ball was deflected for a corner.

A Brown tackle on Jamie Murphy saw the ball fall to Jeremie Frimpong who broke clear down the right before being tripped by Mallan who was shown a yellow card by Bobby Madden.

In the 17th minute Marciano found Murphy with a long throw and the on-loan winger sent in a great cross from the right which just evaded Boyle.

Five minutes later Murphy sent in a dangerous cross from the left which was missed by Diego Laxalt and Boyle at the back post.

Ryan Christie then tested Marciano from 20-yards but the Israeli international managed to palm the ball away then moments later Christie curled a tremendous effort toward the top left hand corner of the goal but Marciano produced a superb acrobatic save to keep the score level.

Joe Newell had a chance from the edge of the box but he stabbed the ball past the post.

Just before the break Marciano misjudged a Christie corner but the his defenders did well to clear the danger.

Four minutes after the restart Marciano yet again saved a long-range effort from Christie as the visitors continued to press forward however it was Hibs who opened the scoring.

Boyle got on the end of a Mallan free-kick and was blatantly bundled over by Brown on the corner of the penalty area and Madden had no hesitation in pointing to the spot. Kevin Nisbet who missed his last effort against Hearts at Hampden took the resultant spot kick which he fired low to Scott Bain’s right.

The former Hibs keeper managed to get a hand to the shot and the ball rebounded into the path of Murphy who slotted the ball into the net from an acute angle.

Lennon replaced Albian Ajeti with Odsonne Edouard in the 59th minute, just before Hibs doubled their advantage with a superb goal.

A long free-kick from Porteous was headed into the path of Nisbet by Murphy and the young striker fired a sensational left foot half-volley past Bain into the bottom corner of the net.

Hibs continued to attack and Mallan set up Nisbet again but his curled effort was deflected over the bar.

Porteous then went close with a powerful header from a Mallan corner but the ball flew inches over the bar.

Griffiths then replaced Elyounoussi and Shane Duffy took over from Brown as Celtic looked to get back into the game and from then it was one way traffic.

Boyle was booked for a trip on Christie then Marciano produced a wonderful save to deny Edouard from 18-yards.

With 12-minutes remaining Celtic pulled one back in controversial circumstances. Porteous sliced an attempted clearance and in the stramash that flowed the ball accidentally struck Paul McGinn’s hand.

Madden once again pointed to the spot and Edouard fired the penalty high into the top left hand corner of the net.

David Gray immediately replaced Murphy to help shore up the defence then Marciano did well to hold a Callum McGregor strike from just outside the area.

Newell then won possession in midfield and strode forward before finding Nisbet but his effort was deflected for a corner.

Tom Rogic was next to try his luck from distance but once again Marciano held onto the ball.

Steven McGinn replaced Joe Newell with in the 88th minute then Mackie was harshly booked for a challenge on Nir Bitton.

The fourth official awarded four extra minutes and Celtic were awarded a free kick following a clumsy challenge by Gray near the East Stand corner flag.

Griffith’s overhit the free-kick but the referee insisted that it should be taken as Mackie had been knocked to the ground in the run-up. The Hibs players claimed for a foul but Madden ignored their pleas.

Griffith’s second free-kick caused another stramash inside ethe six-yard box and the ball fell to the feet of Hanlon who was off-balance. The defender’s attempted clearance fell to full-back Laxalt who fire the ball high into the net from 10-yards.

Hibs almost grabbed a late winner in the dying seconds when McGinn cut in from the right and his shot was deflected into the path of Mackie but his hurried effort flew over the bar and the game ended in a 2-2 draw.

After the final whistle Ross told BBC Scotland “Our immediate emotion is frustration. We put so much into the game and then conceded an avoidable goal so late.

“But I’m proud of the players’ performance and it’s a day for dwelling on the positives.”

Lennon said: “It was exciting. Really disappointed with the goals we gave away, totally unnecessary.

“I thought we had decent control of the first half but lacked a bit of oomph, worked the goalkeeper a couple of times but we weren’t penetrating enough.

“We had brainfreeze for five or ten minutes. Really poor decision from Scott (for the penalty), don’t know where that came from, and then a really awful second goal. Lazy, free header and then not tracking the run.

“For 25 minutes we found our mojo and got back into the game, and got a point that’s probably not enough at the minute.

“We needed more and the players need to have a look at that. It’s a mindset thing more than anything else.

“The second goal was awful. It’s just people standing watching. We’ve given him far too much room to get the shot off, it’s slack as anything.

“I put that down to laziness and a lack of concentration.

“We have to be far more on point with defending. I don’t know if we’ve lost a bit of hunger but we need to get that back quickly. I saw plenty of it in the last 20 minutes but we need to do more to win the game.

Hibs host St Johnstone in the Premiership on Tuesday night.