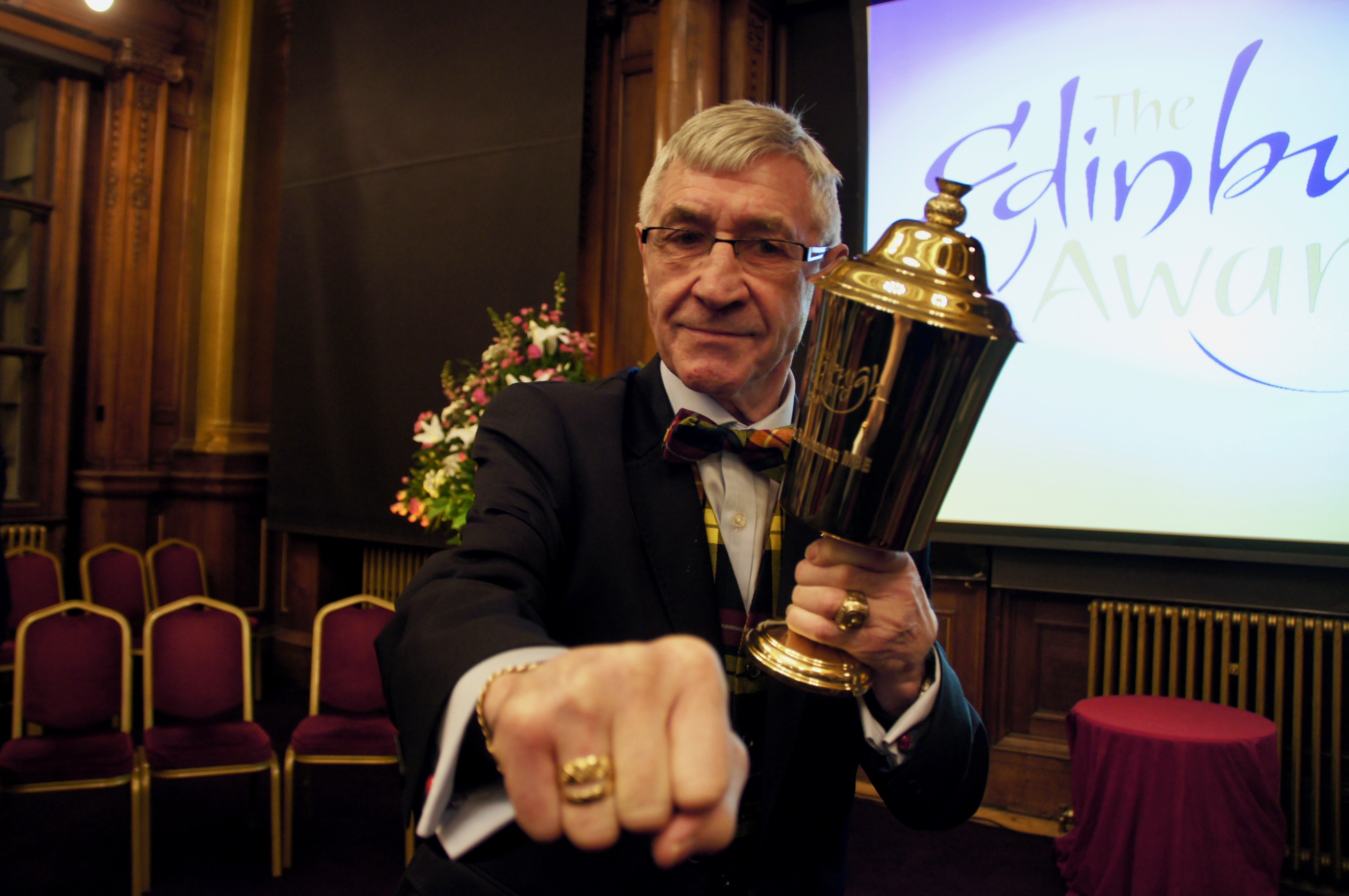 A tale of two pals who like a pint and enjoy each other’s company seems an unlikely premise for a book.

But, when one of the pals is arguably the finest boxer ever to leave the British Isles, and the other is a remarkable man who has spent his life raising money for numerous worthwhile charities, then it turns into a ‘must read.’

Written by Jock Mcinnes MBE, the book, ‘My Pal the Boxing Legend Ken Buchanan’ is a series of ‘rounds’ or chapters containing his memories of days and nights in the company of the great man long after his boxing career finished.

Originally from “Methil” in Fife, Jock has been happily married for ‘many, many years’ to the long suffering Christine and is a proud father to Stuart and grandfather to Eilidh and Callum.

He served in the Black Watch, Royal Highland Regiment (RHR), as an advanced Adventure & Physical Training instructor for 22 years and was an army individual boxing champion, the Midland District Dundee/Fife boxing champion twice and represented Scotland on a few occasions.

He was awarded an MBE for years of organising and administrating several charity challenge’s including, Tandem Skydiving, Mount Kinabalu, The Sahara Desert, Mount Kilimanjaro, Mount Elbrus, The Gobi Desert, Mount Toubkal, Nepal experience, Mont Etna and a fire walk, Moldoveanu, raising well over two million pounds for local and national charities and despite his advancing years he is far from finished trekking and raising money.

Thirty-five years ago Jock met Ken who coincidentally had fought his father Bill and since then the pair have become great friends and enjoyed many ‘adventures’ over the years.

Ken Buchanan, MBE, was born In Edinburgh 75-years ago and is widely considered to be one of the finest boxers to ever grace a ring. He turned professional  in 1965 and won both the Scottish and British lightweight crowns before traveling to the United States and gaining world-wide recognition.

Famously when he returned to Turnhouse Airport, only his family was present to greet him. None of the Scottish newspapers or photographers turned up to mark the moment, which still rankles with the ‘champ’.

Ken successfully defended his title twice, winning a 15-round decisions over Ruben Navarro in Los Angeles and Laguna at Madison Square Garden in New York then a year later he returned to the Garden for his most controversial and memorable contest.

On June 26, 1972 the Scotsman put his belt on the line against Roberto ‘Hands of Stone’ Duran and at the close of Round 13 the Panamanian struck Ken with a vicious low blow which left Ken writhing in agony on the canvas, clutching his groin. Such was his pain he could barely stand and had to be half-carried back to his corner. Moments later referee Johnny LoBianco controversially made a snap decision to end the bout, ruling the champion unfit to continue.

Ken returned three months later and stopped future Hall-of-Famer Carlos Ortiz in six rounds. In 1973, he beat future world champ Jim Watt to regain the British lightweight title. He lost in his only other world-title bid, dropping a decision in 1975 to WBC champ Ishimatsu Suzuki.

He eventually retired in 1983 and of his 69 pro fights only six were in Scotland, none in his home town.

Jock told The Edinburgh Reporter: “The book is about a good honest friendship between two pals. One just happens to be the greatest pound for pound boxer that has ever come out of the UK and the other, me, a wee lad from the Kingdom of Fife.

“My own father Bill actually boxed Ken as an amateur twice, and Ken later presented me with an original boxing poster from one of the bouts, which I still have to this day. He also gave me an amateur boxing record card with my dad’s name on it, which is now framed and hangs on my wall

“The reason for writing this book is mainly to remind people of the achievements of Ken.

“It is sad to say but Ken,  like Glasgow’s Benny Lynch, another hero of mine will be more famous when he is dead which in my opinion is disrespectful and Edinburgh Council, and those who sit in the Scottish parliament in Holyrood, should all hang their heads in shame for not holding Ken aloft and parading him for all Scotland and the world to pay homage to.

“One of my best memories personally is being asked to present an award to one of my heroes, Dick McTaggart. I haven’t felt so proud since my son’s wedding, and for a good Fifer like me presenting such an award to a fellow scot, a Dundee man, made me burst with pride. That night also seeing world champions such as Alan Minter and Bunny Johnston queueing up to meet Ken and have their photo taken with him showed the esteem that he was held in.

“The pandemic has hit Ken hard. He is currently in a care home, but at first didn’t understand what was going on and the need to stay in his house but he seems settled and I visit him when I can.”

Some of the money raised from the book will be used for another great charitable adventure somewhere around the world by Jock when conditions permit.

Jock modestly describes himself as a ‘wee lad from the Kingdom of Fife’ but ‘wee lads’ don’t normally get awarded an MBE by Her Majesty the Queen, so judge for yourself.

Buchanan was honoured with The Edinburgh Award in 2017.