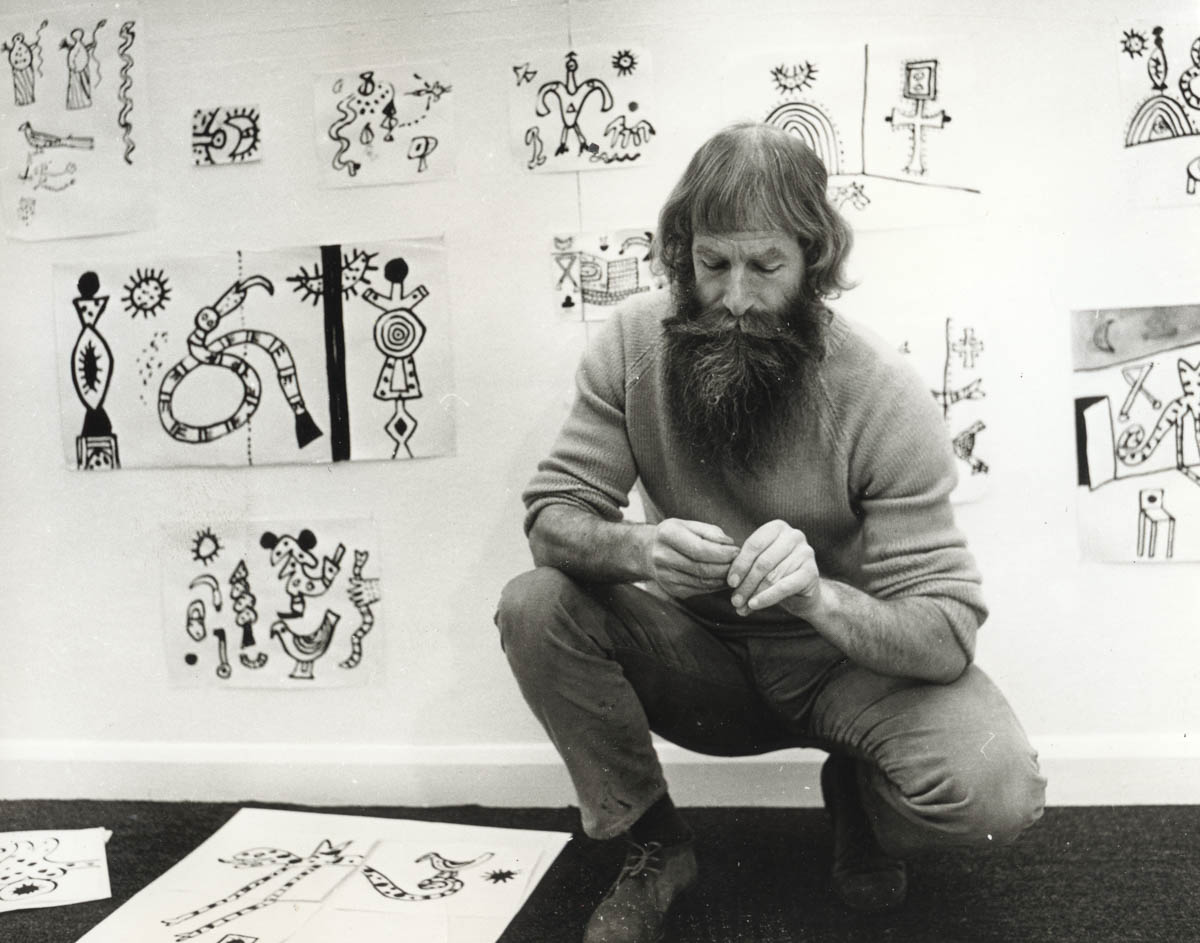 Early in the New Year, Dovecot Studios will present ‘Alan Davie: Beginning of a far-off World’, a centenary exhibition celebrating the work of Scottish artist Alan Davie (1920-2014). Featuring rarely seen works from each decade of his career, as well as a tapestry and rug created in collaboration with Dovecot Studios, this exhibition is a timely tribute to one of the greatest Scottish artists of the 20th century.

Alan Davie was a true polymath, working as a painter, jeweller, and jazz musician. From the pulsating and improvised beat of jazz, to the particular rhythm and skill of silversmithing, Davie built a multidisciplinary practice which led him to seek out the magic in all his pursuits, particularly in painting.

The only exhibition held in Scotland to mark the artist’s centenary, ‘Alan Davie: Beginning of a far-off World’ takes its title from a 1949 monotype that will feature in the show alongside paintings, drawings, and archive material from the private collections of Davie’s friends and peers.

Each decade of his creative career will be articulated by a work, from early paintings as a graduate of Edinburgh College of Art to drawings from a series made during the last year of his life.

Davie’s multidisciplinary approach is demonstrated through collaborations with Dovecot Studios, of which a tapestry ‘Cosmic Spiral’ and rug ‘Celtic Spirit II’ will be displayed. Created in 2003, these works followed a tapestry commission for the Chancellor’s Building at the Royal Infirmary, Edinburgh, and are examples of Davie’s artistic commitment to the spiritual and the mythic qualities of art.

‘Cosmic Spiral’ and ‘Celtic Spirit II’ allow a further reading of Davie’s interest in international cultures and indigenous craft, and both works will be available to purchase.

Celia Joicey, director at Dovecot Studios says: “Alan Davie is hugely important in twentieth century British art, and we are delighted to mark his centenary with an exhibition that will chart his evolution as an artist. Dovecot enjoyed a creative relationship with Davie which is demonstrated through an incredible tapestry and hand-crafted rug, and we see this as a moment to pay homage to an artist whose position within modern art should be celebrated.”

This exhibition is curated by Edinburgh College of Art graduate Siobhan McLaughlin, with the support of Dovecot Exhibitions Curator Kate Grenyer.