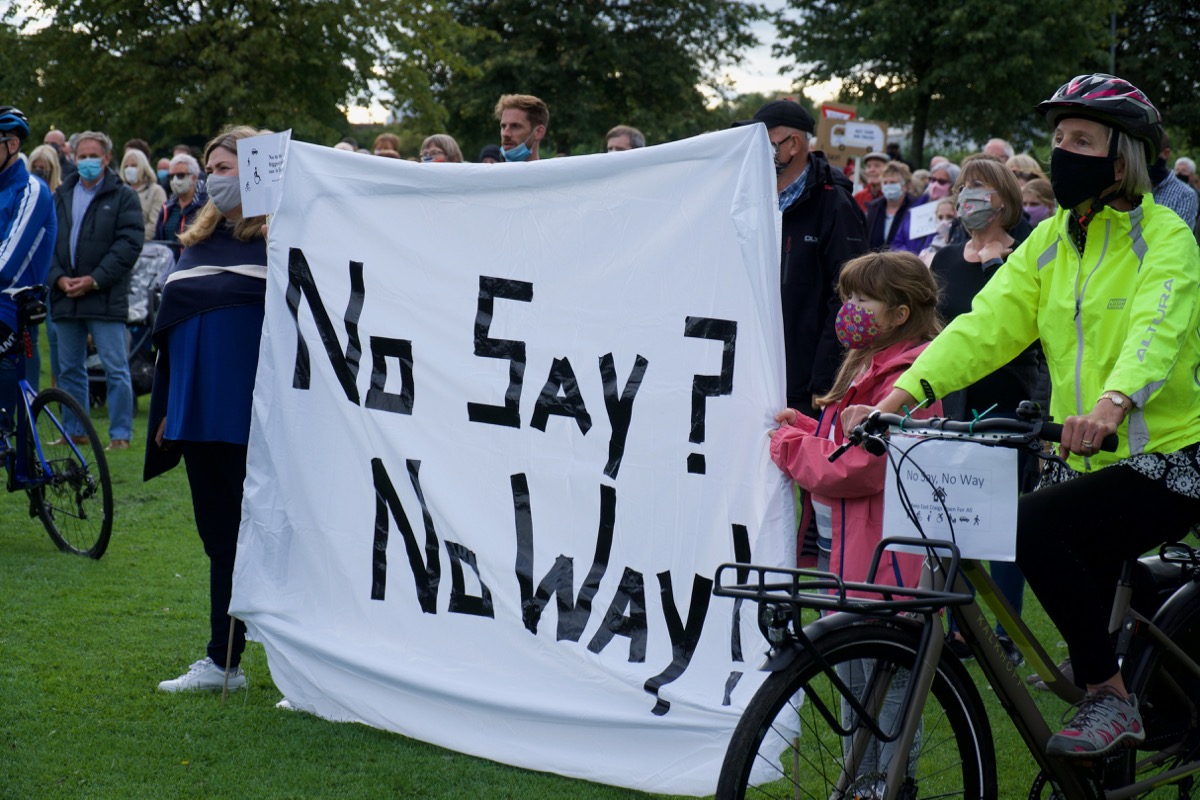 Members of the Transport and Environment Committee will meet this morning to discuss and possibly approve the plans to introduce a Low Traffic Neighbourhood (LTN) in East Craigs.

The council plans on introducing measures to stop rat running and make roads safer for residents walking, wheeling and cycling there. They are using the money awarded to the council by The Scottish Government to implement emergency measures to make roads and pavements safer to use in times of coronavirus, but there has been a degree of opposition to the scheme.

There has been a lot of discussion on social media, with accusations that several Twitter accounts all opposed to the plans are run by the same person or groups of people.

The opposition has been quite vocal with a petition of 2,600 or so signatures, a public meeting organised by the local MSP, Alex Cole-Hamilton attended by hundreds of people, and now several deputations who have written their views to the council. The atmosphere at the public meeting was angry with almost all of those attending opposed to the idea of an LTN, with many saying there is no rat running in the area.

Normally such deputations would be heard in person at the City Chambers. Today they are reduced to the written word – but they are all quite powerful even so.

These deputations are presented by several groups. A group called Low Traffic Corstorphine advocates for the real time trial of a new roads set up saying: “There is good evidence from other places in the UK and Europe that shows it is likely an LTN would bring benefits to East Craigs and west Edinburgh. There will be lessons to learn from the trial but there is huge potential to improve the local area, with benefits including better air quality, improved community health, more social cohesion and safer, more positive redress of space, favouring healthy travel and better access for all kinds of people, not just those who drive.”

David Hunter Chairperson of Get Edinburgh Moving a local residents community group writes that they have an opinion from counsel (who is unnamed) and quote from an abridged version of that document, saying that the City of Edinburgh Council has overstepped the mark by planning an LTN under emergency powers. The group laments the way the council has not listened to the ‘clear democratic message’ which has left residents feeling anxious about the plans. Although the council has revised the layout of the proposed LTN they feel that these may be a ‘small step in the right direction, but are nowhere near enough and remain unacceptable”.

Corstorphine Community Council say that they support the Spaces for People measures, desire the introduction of a Low Emission Zone as soon as possible in the whole city, and they welcome the revised plans which council officers have now produced. They also refer to the proposals to introduce a second LTN in Corstorphine South although they do ‘not have details of what it will encompass’.

Drum Brae Community Council regret the divisions among residents which have resulted from the council’s proposals and suggest that the council stops and does a proper consultation on the LTN before introducing it. They call upon the council to reveal figures and statistics which they have asked for to back up the proposals. In short they want the council to be much more transparent about the reasons behind the plans and say that their role in local democracy has been much compromised since the disbanding of Neighbourhood Partnerships and Localities. Kenny Wright is Chair of the community council and says: “as a Community Council we’ve always believed in prioritising doing it properly rather than at speed, that way we don’t waste time, inordinate amounts of money and resource by going back to repair the mistakes we should have noticed in the first place, perhaps you will be familiar with that?”

If this was a meeting with in person deputations we are sure there would be hundreds in attendance outside the City Chambers all trying to make their voices heard.

The Scottish Government awarded £5 million to Edinburgh to be used on Covid-19 schemes. You can read about this in more detail here.

All you can do today is watch the meeting online here. It will be chaired by Transport and Environment Convener, Cllr Lesley Macinnes. The council report and the text of all of the deputations are below. The meeting begins at 10am.