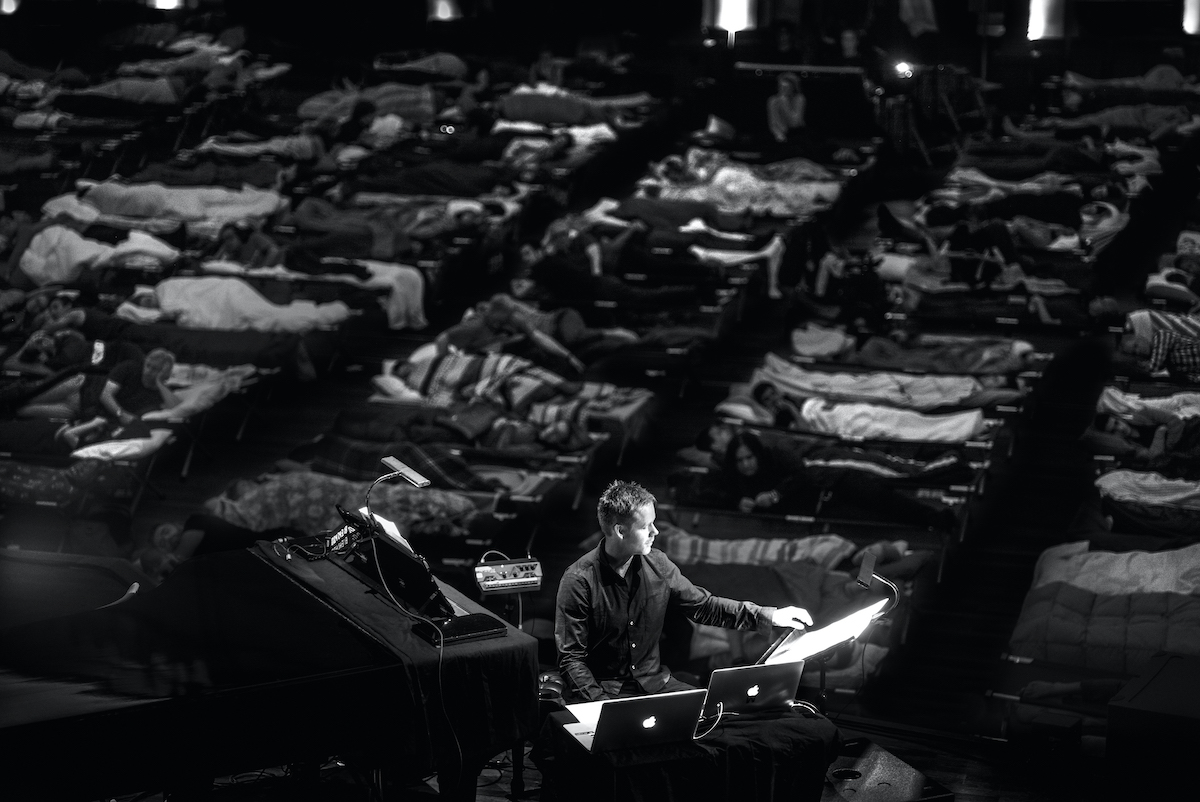 Independent cinemas to come back to life with SLEEP.

The documentary behind the composer Max Richter’s work will have its European premier on Tuesday, opening in more than 87 UK and Irish cinemas accompanied by a Q&A with Max Richter and his creative partner Yulia Mahr.

The film was shown for the first time at this year’s Sundance Film Festival, and is a meditative respite from the chaos of the modern world, through the universal experience of sleep.

Max Richter is a composer and musician known for Mary Queen of Scots and Ad Astra, and the film follows both Max and Yulia as they perform the eight hour opus at an open air concert in Los Angeles.

Yulia Mahr said, “Max and I spent most of our twenties watching films at the Everyman in Hampstead, the Curzon cinemas and in any independent cinema we could get to.

“We spent our thirties at The Filmhouse and The Cameo in Edinburgh. In fact I think we spent more time in cinemas than out for a while!

“We were hungry to know more of the world and there it was .. we loved those all day Sunday screenings .. and would argue into the night about the meaning of everything we had seen. Max’s favourites were the Russians – Tarkovsky, of course, and I loved the French New Wave – especially Jean Rouch – and the indie scene coming out of America at the time.

“Nothing beats cinema – that  immersive experience of being engulfed in a world not your own. It’s under threat these days but home viewing- where your everyday world is still right there beside you – doesn’t cut it. I’m delighted that our film can play a small part in getting audiences back into independent cinemas. We all need more dream time. “

The film is a ground-breaking visual portrait which echoes the contemplative essence of Richter’s work, offering a poetic depiction of the ‘liminal state’ audiences experience when attending a live performance – where fans slumber through the overnight concert in beds, not seats.  Mahr’s personal archive is weaved with performance footage from Berlin, Sydney, and Paris to create a rich portrait of a shared artistic process, along with contributions that illuminate both the science and story behind the work.

Max Richter’s eight-hour Sleep concert is the live incarnation of his 2015 album of the same name, which has been hugely successful worldwide – praised by critics and garnering roughly 350 million streams. The landmark piece was premiered in London four years ago (becoming the longest single continuous piece of music ever broadcast live on the radio) and has since been performed around the world in a variety of stunning venues including the Sydney Opera House, Grand Park in Los Angeles, Kraftwerk Berlin, the Philharmonie de Paris and most recently at the Great Wall of China.

Max Richter stands as one of the most prodigious figures on the contemporary music scene, with ground-breaking work as a composer, pianist, producer, and collaborator. From synthesisers and computers to a full symphony orchestra, Richter’s innovative work encompasses solo albums, ballets, concert hall performances, film and television series, video art installations and theatre works.

He is classically trained, studying at Edinburgh University, the Royal Academy of Music, London, and completing his studies with composer Luciano Berio in Florence, “Memoryhouse”, Richter’s 2002 debut, has been described by The Independent, and Pitchfork Magazine as a “landmark”, while his 2004 album “The Blue Notebooks” was chosen by The Guardian as one of the best Classical works of the century.

“SLEEP”, his eight-and-a-half-hour concert work, has been broadcast and performed worldwide, including at the Sydney Opera House, Berlin’s Kraftwerk, Amsterdam’s Concertgebouw, the Philharmonie de Paris, and at the Barbican, London.

Yulia Mahr is a visual artist and film maker with a background in visual anthropology. She has worked both in the academic field and as a practitioner / curator, often in collaboration with her partner Max Richter. Recent and current projects include the Sounds and Visions festival at The Barbican Centre, London; Le Weekend Festival at La Philharmonie de Paris, and the ongoing series of SLEEP performances, latterly in New York, Los Angeles, Sydney, Amsterdam, Austin, Paris, London and Beijing.

How to make 2015 extra healthy