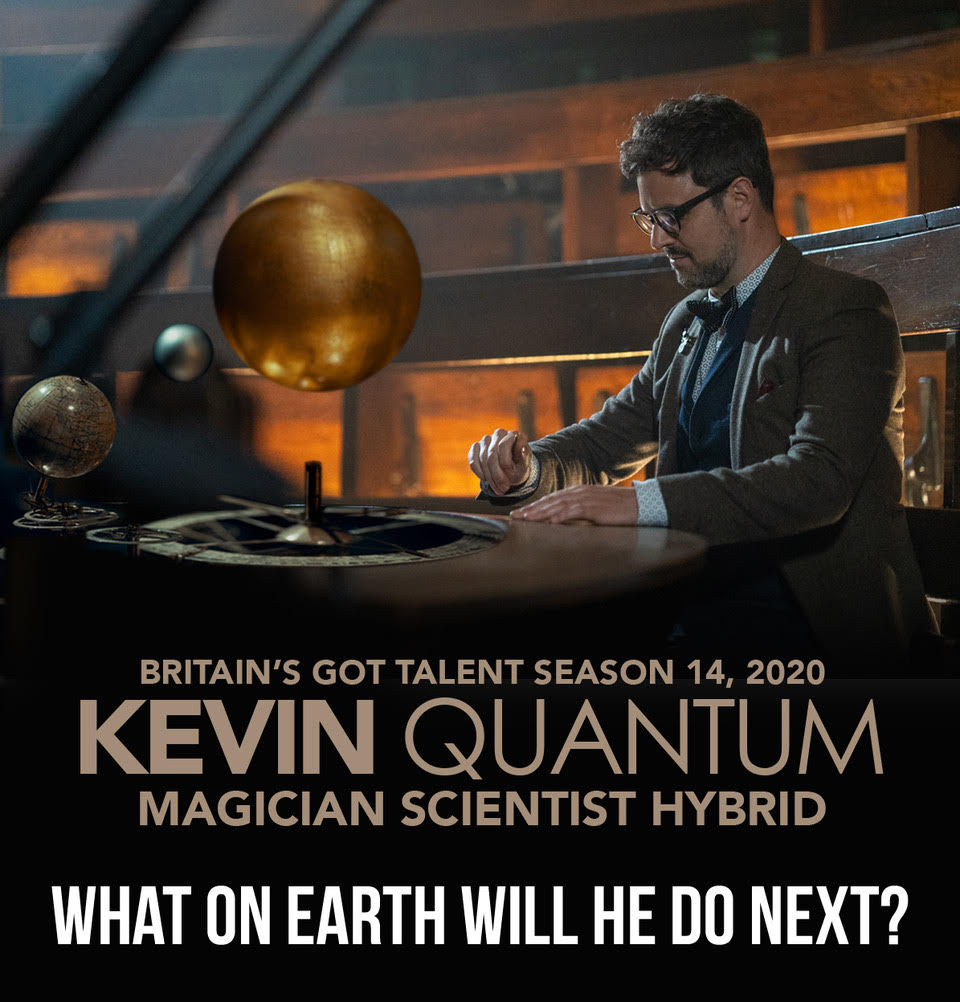 Kevin Quantum is well known to Edinburgh audiences as a magician scientist, and he is currently taking part in Britain’s Got Talent.

He will show off his brand new act on the semi-final of the TV show on 26 September 2020, and he is asking for local support to get him through to the next round.

Kevin said: “I feel like this is a culmination of everything from the last 20 years. My act includes physics principles from my degree, engineering, magic, presentation, and lots of preparation.”

“For the first round I rehearsed down at North Edinburgh Arts. They have a wonderful theatre space, and I’ve done a few shows there over the years. For the final it was more difficult. Part of the rehearsal was here in Edinburgh, part in Blackpool and part in London in the TV studio that we used for the show.”

Kevin has done amazingly well to get to the semi-final. He explained the process: “I’ve done two rounds now. Britain’s Got Talent has over 1000 applicants, and of those only 300 make the live auditions. From that 300 only 40 make it to the semifinals and then that 40 goes down to 10.”

We had to ask who his favourite BGT judge is. He replied: “Simon Cowell. He’s honest and upfront and smart, and also very compassionate if you watch carefully. He is closely followed by David Walliams. I love sketch comedy and have happy memories of watching Little Britain live at the Playhouse a number of years ago.”

In the semi-final the act which Kevin will perform is called ‘SUPERCHARGED’ and he tells us ‘it’s a sci-fi fantasy involving very high voltages! In the first round I performed my canon balls on fire act. You can watch it on YouTube here

We asked also how Kevin manages to keep introducing something new into his act. He explained: “It is all mainly about making it good. These days coming up with good ideas has to happen a lot, but turning that into something workable takes literally blood sweat and tears. To give you an example, I’ve got blisters and burns all over my fingers from rehearsing with a couple of chemicals that allow me to create a ‘bang’ and flash of light at my fingertips. It’s been a painful period! But I got there and it looks pretty good now.”

During lockdown Kevin says that BGT has been a useful diversion for him. His last performance was however relatively recent but not in Edinburgh. He explained: “My last big show was in Italy for an Italian TV show. It happened just after the travel corridors were opened. It was a wonderful experience with a live, socially distanced audience – proving that it can happen! I performed my canon balls on fire act – the one that I did on BGT. It went down really well with the Italian audience!”

Kevin has posted some images of the rehearsals from the recording of the show which took place earlier this month, although he is rightly coy about the outcome. So you will have to watch the show when it airs on ITV. Remember the date – 26 September 2020.

A magical chat with Kevin Quantum

Super Saturdays? Get Me Out of Here