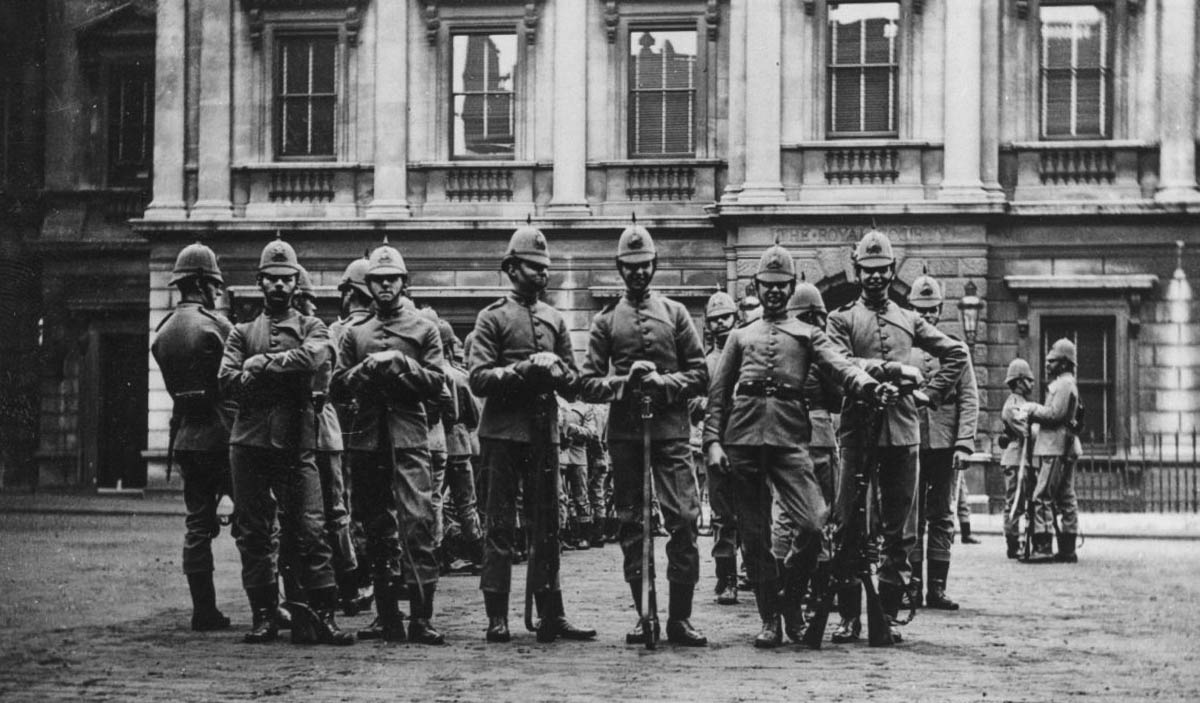 From fading Victorian photographs to WWII cartoons – research into an astonishing collection of pictures and memorabilia is revealing the forgotten of one of the Army’s most remarkable regiments.

The Artists Rifles, whose members included everyone from William Morris to Noel Coward, were formed in 1860 by a group of painters, architects, poets, sculptors, musicians and actors concerned about a possible French invasion.

They played a significant role in the Boer War and both World Wars and following their disbandment in 1945 were revived and refashioned to form the basis of today’s SAS Reserve.

Keeper of the regimental museum and archive Patrick Baty, a former member of the SAS Reserve, and a small band of volunteers are picking their way through everything from photographs to enrolment papers, most of which have lain untouched for decades.

Their mission is to raise awareness of what he calls this “curious regiment so full of remarkable men.”

Among the photos in the collection are ones showing a monocle-wearing Brandon Thomas (writer of Charley’s Aunt), Sir Frederic Leighton (painter of Flaming June) and Pre-Raphaelite William Holman Hunt.

Patrick said: “We’re at the early stages of sorting and cataloguing the collection but it’s already clearly a treasure trove, with so many images, records and memorabilia of this highly unusual regiment.

“It’s a miracle that so much has survived and we are sure that it will cast a new light on the stories of so many artists, writers, poets, architects and other creatives who served in its ranks.

“People are often not even aware that the likes of William Morris, Holman Hunt, Lord Leighton, Eric Blore, Brandon Thomas, Robert Sherriff, Hugh Lofting and Dante Gabriel Rossetti were in the Army.

“The story of the regiment and its members is an astonishing one and deserves to be far better known.”

These were warrior artists who became well-versed in the art of war.

They included Alfred Leete, who was responsible for the famous Kitchener Your Country Needs You recruitment poster, and poet Wilfred Own whose work addressed the carnage faced by those very recruits. There are also whimsical cartoons reflecting military life.

People are often surprised by how many artists and other creative people were also enthusiastic soldiers. Indeed one of the better-known pictures of the early photographic pioneer Oscar Rejlander (a member of the regiment) is a double portrait of himself as artist and in uniform.

Patrick said: “It attracted very large numbers of intelligent, educated, talented young men with charisma, a capacity for lateral thinking and leadership. For this reason it became a training regiment in WWI, turning out some 10,000 officers for other regiments.”

Of the 15,000 men who trained with The Artists Rifles in the Great War, eight were awarded Victoria Crosses and there were over 1,000 other medals for gallantry.

But members of the Artists Rifles were not all necessarily natural soldiering material – William Morris had trouble with drill, Rossetti questioned every order, Noel Coward was invalided out and Ford Madox Brown accidentally shot his own dog (see attached documents for more).

Army@TheVirtualFringe is a line-up of 40 free online live-from-home performances, rehearsed readings, discussions and workshops from 10-27 August. It was created to replace the annual Army@TheFringe event which sees an Edinburgh drill hall turned into a Fringe venue hosting high quality shows about life in and out of uniform.

Patrick will be talking about the regiment in the free final event of the three-week Army@TheVirtualFringe – an online discussion hosted by the National Army Museum called Arts & The Army: A Relationship Built Over Centuries (Thursday, 27 August 7.30pm).

Other events this week include:
•Writing From Lived Experience (Tuesday, 25 August) with Harry Parker, Army veteran and author of Anatomy of a Soldier.
•Poetry and Theatre workshop (Tuesday, 25 August) with Tim Marriott, exploring the poetry and creative writing in live theatre and how to produce work for the Fringe.
•British Army Musicians: More Than Just A Marching Band (Tuesday, 25 August). A showcase of performances by Army musicians hosted by Lance Sergeant Connor Deacon and Lance Corporal Andee Birkett.
•Variety Night (Wednesday, 26 August). Hosted by radio DJ and military husband Chris Keen – a celebration of the multitude of artforms explored in Army@TheVirtualFringe with performances from many of our participants.