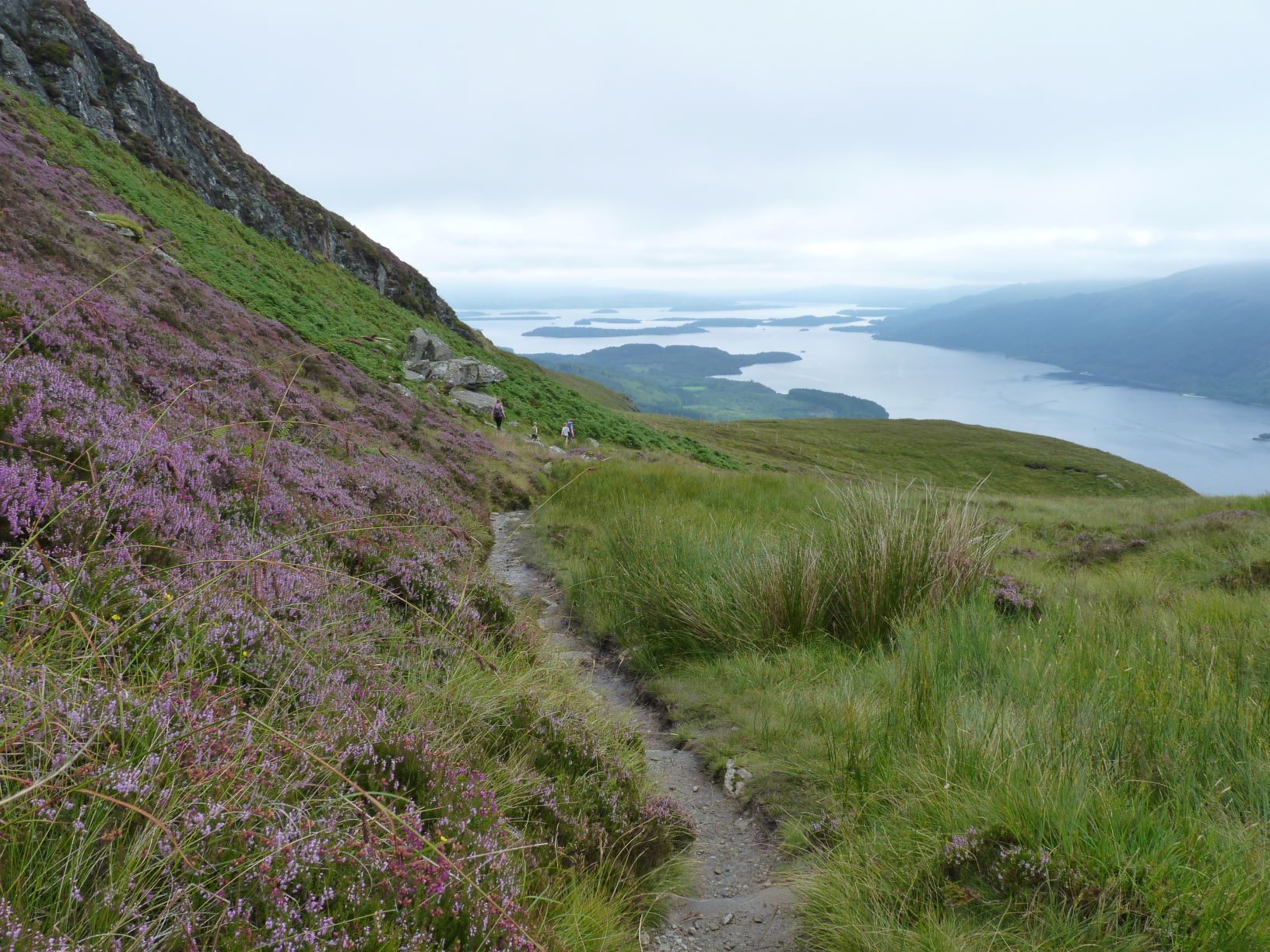 My “staycation” took me to the bonnie banks o’ Loch Lomond.

The cloud hung low over the glen but as we climbed up the Ben, we emerged into a magical  world of blue skies, sunshine and mountains poking their heads up through the cloud. And this feeling of parallel worlds, one high and one low, is the story of the week.

The schools are back, the roads are busy again, only a few people are wearing masks outdoors. Shops, cafés, visitor attractions, trains, buses are all getting used to social distancing and are operating almost as normal. At the end of the month, gyms, swimming pools and sports halls will be allowed to re-open.  The number of Covid-related deaths in the past week has been a record low, just 3, taking the total to 4,216.   There’s even the prospect of sports stadiums, theatres and concert halls re-opening soon with limited audiences.

Those are the highs, but there are also the lows.  The number of new coronavirus cases each day has crept up to over 50 – on Wednesday this week it rose to 77.  An outbreak in pubs in the centre of Aberdeen resulted in 237 cases. A food factory in Coupar Angus had to be closed down when 43 people fell ill, and household contacts of factory workers from the 2 Sisters food processing plant there are now being asked to self-isolate until Monday 31 August as a precaution. There have been a number of isolated cases among school pupils and teachers, but they are not thought to have been contracted in the schools themselves.  So in the oft-repeated words of the first minister, “the virus has not gone away.”

Nicola Sturgeon remains more cautious than her roguish counterparts in England.  Phase 4 of the route out of lockdown will have to wait, she told parliament on Thursday. With the schools only just back and the Covid figures rising, the risk of the virus getting out of control is still too high. So, working from home whenever possible, the wearing of face coverings indoors, two-metre distancing, hand sanitising, all remain in the book of Deuteronomy.

However, the lady is sometimes for turning.  Within two days, she and her Education Secretary, John Swinney, changed their minds and accepted that teachers’ grades alone would determine this year’s school results.  The bizarre algorithm which the Scottish Qualifications Authority came up with was swiftly ditched because it downgraded the results of pupils from poorly performing schools in deprived areas.  It was a crude attempt to prevent “results inflation”.  Incredibly the same mistake and the same u-turn was made this week in England.  It was as if ministers there were totally unaware of what was happening in Scotland. Now, the universities and colleges are wondering how they are to accommodate all the extra candidates who qualify for places.

Clearly the Covid crisis has caused government ministers, north and south of the border, to take their eye off the other balls that are in the air.

Like the economic recession – a near 20 per cent fall in output and rising unemployment as the job retention scheme comes to an end.

Like climate change.  The last two weeks have brought serious storms and flooding to several parts of Scotland, notably in Perth, Falkirk and Stonehaven.  A landslide just outside Stonehaven caused a train to derail and catch fire, killing the driver, the conductor and a passenger.  It’s the first fatal rail accident in Scotland for over 25 years. The A83 “rest and be thankful” road in Argyll was again closed by a landslip. And at Polmont near Falkirk the Union Canal burst its banks and flooded the main rail line between Edinburgh and Glasgow. The repair work will take several weeks and meanwhile trains will have to be diverted via Bathgate.

Finally, with the professional football season under way, the new leader of the Scottish Conservative Party, Douglas Ross MP, will be pretty busy. He’s a fully qualified assistant referee and has said he intends to carry on with this other thankless task at the weekends and when the UK parliament is not sitting. It landed him in trouble with the war veterans on VJ Day, earlier this month, when he missed a ceremony in his Moray constituency because he was working as a linesman at the match between Kilmarnock and St Johnstone.

But I, for one, don’t begrudge him a little time off from politics.  It must be like emerging from the misty lowlands to enjoy a different world, above the clouds, where life is clearer and brighter.

Though, running the line at a football match must be just as challenging and just as changeable as the weather on Ben Lomond.