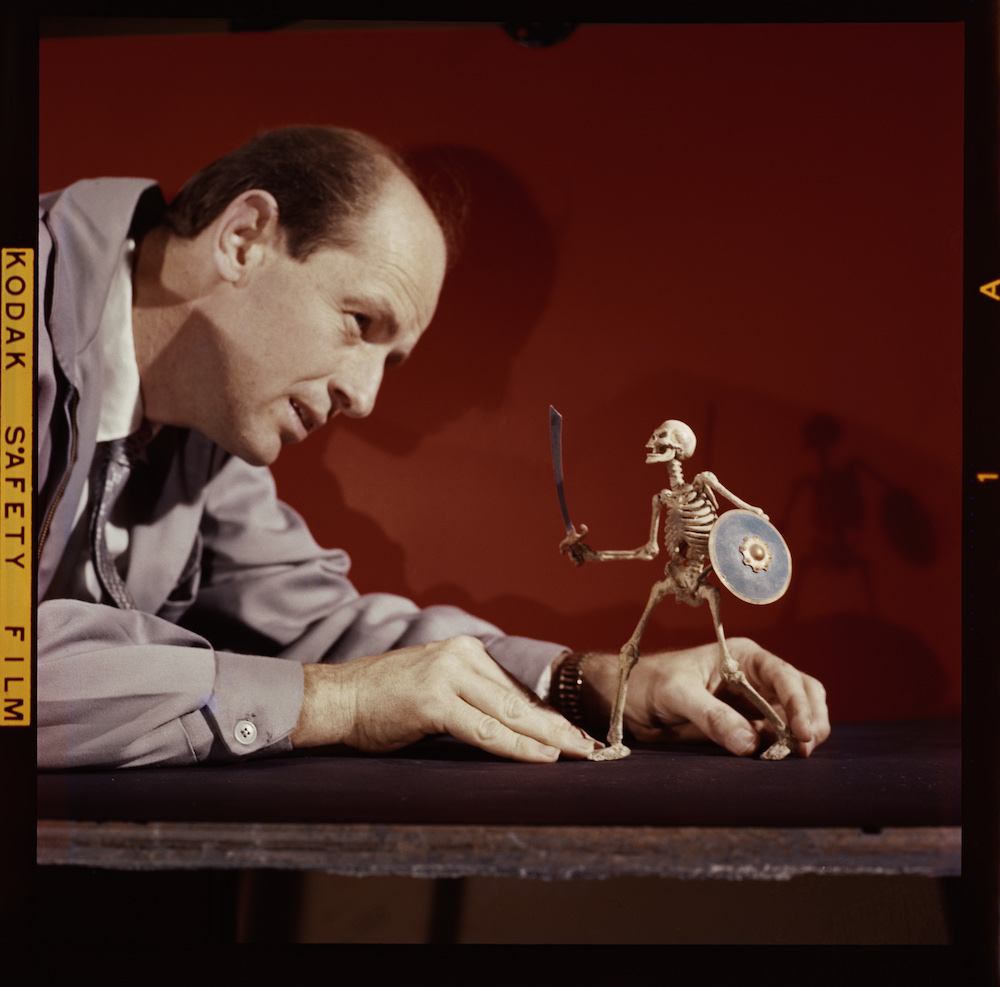 A thrilling and immersive exhibition on the pioneering and  unparalleled work of Ray Harryhausen (1920-2013), the cinematic titan whose movies shaped the face of modern cinema, will be coming to the National Galleries of Scotland (NGS) this autumn. This is part of the late filmmaker’s centenary celebrations.

Working in close collaboration with The Ray and Diana Harryhausen Foundation, the National Galleries present Ray Harryhausen: Titan of Cinema which will lead the reopening of Modern Two at the Scottish National Gallery of Modern Art from Saturday 24 October 2020.

Titan of Cinema will be the largest and most comprehensive exhibition ever of the art of the legendary trailblazer Harryhausen, who elevated stop-motion animation to an art form between the 1950s-1980s, and whose exhilarating movies inspired a generation of the world’s greatest living filmmakers, among them Steven Spielberg, George Lucas, Sir Peter Jackson and Guillermo del Toro.

The exhibition was originally scheduled for May this year and was delayed due to current events, but we are delighted to share that it will now lead the reopening of Modern Two with an extended run from October until September 2021. Visitors can secure their tickets via our new online booking system, available from Wednesday. 2 September on our website. Visitors can book tickets up to 3 months in advance.

Ray Harryhausen was responsible for some of cinema’s most magical moments. Titan of Cinema will showcase the original models that were miraculously brought to life on screen by Harryhausen’s mastery of stop-frame animation, such as the iconic skeletons from Jason and the Argonauts (1963), the Cyclops from his highly-influential Sinbadseries, and his trademark UFOs from 1956’s Earth vs the Flying Saucers. The models shown will include those which would later inspire movies such as Lord of the Rings, Star Wars, Jurassic Park, Pan’s Labyrinth and Mars Attacks!

Also on display will be the young Harryhausen’s very first models, including a marionette inspired by the gorilla from King Kong, conceived by the film’s special effects supervisor Willis O’Brien, and artwork from Mighty Joe Young, the first film that Harryhausen and O’Brien worked on together, and the movie which effectively launched Harryhausen’s career.

These miniature monuments to cinematic history are joined by a treasure trove of posters, personal memorabilia, original photographs, storyboard illustrations and the drawings and art that inspired Harryhausen’s creatures and films, all taken from his remarkable collection.

The Academy Award-winning filmmaker’s life story, work and boundless imagination will be explored in an immersive presentation that will reveal new insights to dedicated Harryhausen fans, and open up a whole world of wonder to visitors of all ages and interests.

Visitors will have the opportunity to meet face-to-face the models and memorabilia from the films of their childhood. Younger visitors can learn all about Harryhausen’s pioneering movie-making process, and the great influence he’s had upon many of the movies and animations of today, including Wallace and Gromit.

Californian-born Harryhausen was massively inspired by the work of Willis O’Brien after seeing King Kong at Grauman’s Chinese Theatre in Hollywood in 1933. As a teenage boy, he went to see the film 33 times. Soon after, he was experimenting with models and stop-motion animation in his backyard, and was later mentored by O’Brien.

Titan of Cinema tells the story of how this young boy became so enraptured by O’Brien’s special effects , he devoted his entire life to filmmaking, invented ingenious techniques, created unforgettable cinematic moments, became what Aardman Animations’ Peter Lord described as a, “one-man industry” and inspired many of the world’s greatest movie-makers.

It also explores Harryhausen’s love of art and the impact certain artists had upon him, including the spectacular illustrations and paintings of Gustav Doré (1832-1883), and Joseph Michael Gandy (1771-1843), whose epic painting Jupiter Pluvius will be concurrently shown at the Scottish National Gallery. The filmmaker said Gandy’s paintings taught him, “to think big and give my imagination free reign”.

The exhibition also traces Harryhausen’s unique connection to Scotland. Harryhausen’s wife Diana was the great-great granddaughter of the Scottish explorer David Livingstone, and both she and her husband developed a strong affinity for the country. One of Harryhausen’s final projects was to design a statue of the legendary missionary, which now stands in the town of Blantyre.

Ray Harryhausen: Titan of Cinema is presented in collaboration with The Ray and Diana Harryhausen Foundation (Charity No. SC001419) to celebrate what would have been his centenary birthday year. As part of a series of events and initiatives under the banner #Harryhausen100, the exhibition will be accompanied by a programme of events, bringing his creations to life once again and celebrating the legacy of the filmmaker who shaped cinema as we know it today. Titan of Cinema would not be possible without the generous support of players of People’s Postcode Lottery.

We want all visitors to stay safe while visiting our buildings, and new measures have been implemented so that the health and safety of our visitors, employees and volunteers can be ensured. We have secured the UK-wide industry standard ‘We’re Good to Go’ accreditation, which means businesses across the sector can demonstrate that they are adhering to the respective Government and public health guidance, have carried out a COVID-19 risk assessment and check they have the required processes in place.

Vanessa Harryhausen, daughter of Ray Harryhausen and a Trustee of The Ray and Dianna Harryhausen Foundation, said: “Our plans to celebrate Dad’s centenary at the National Galleries in Edinburgh are so exciting; if he was still around, he would be so enthused by all the centenary celebrations and plans! It’s wonderful that we are able to display so much of Dad’s collection: the space at the Galleries gives us great scope to display as many of his models and artworks as possible, as well as personal items which have never been exhibited before.”

“We at the Foundation are thrilled to work with the National Galleries on displaying Dad’s collection and celebrating his legacy. He established the Foundation in order to encourage future generations to enjoy stop-motion animation, and we hope the celebrations and activities in Edinburgh will encourage fans of all ages to be inspired by his creativity”.

Stephanie Kerr, programmes advisor at People’s Postcode Lottery, said: “I’m delighted this exhibition, which has been supported with funding raised by our players, is now able to take place. It’s sure to be an inspiring experience for everyone who visits.”

Titan of Cinema will be accompanied by a new publication especially commissioned for the exhibition, written by Harryhausen’s daughter Vanessa, that provides a very personal insight into her father’s ground-breaking career, collection and life. This book, part-biography and part-exhibition catalogue, marks the first ever time Vanessa has spoken about her father’s work in such detail, and includes a personal biography of her father from the beginnings in the 1930s through to projects he was working on throughout his ‘retirement’, less than 10 years ago.