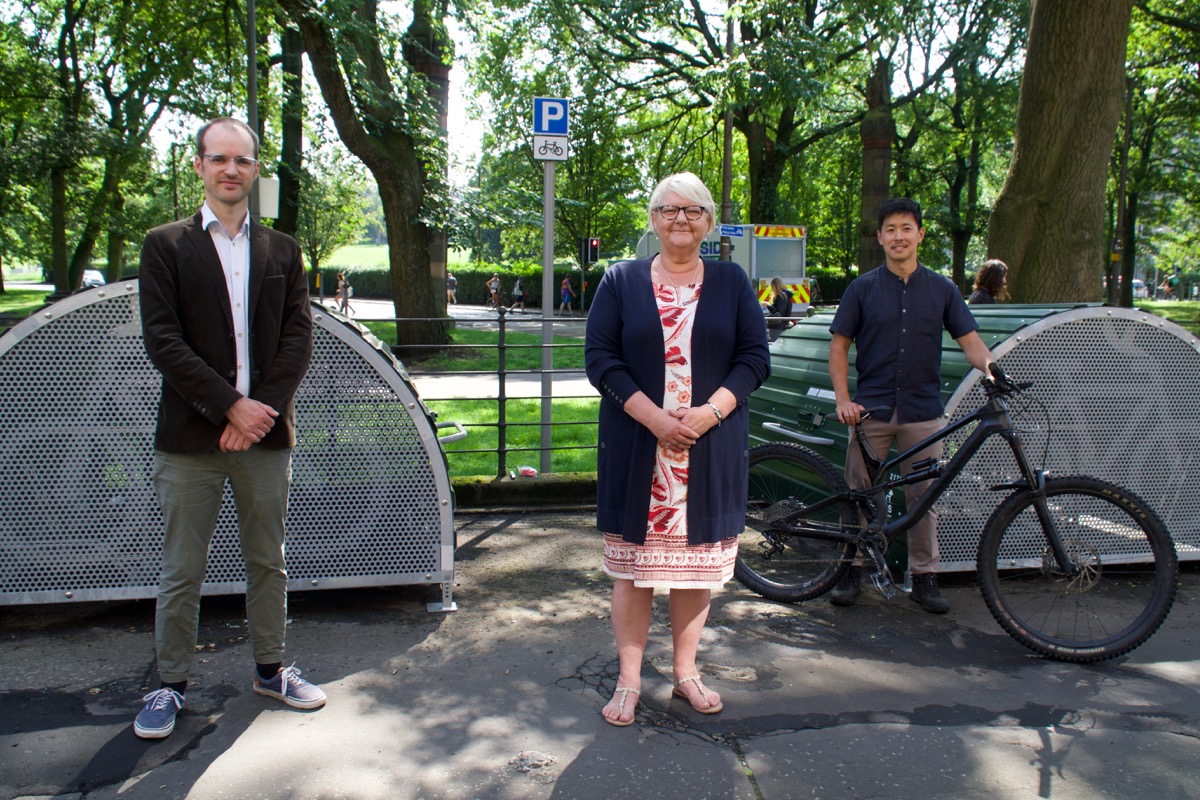 The latest of the 180 Bikehangars which are being installed in Edinburgh was lowered gently to its site at the end of Lonsdale Terrace this lunchtime.

Cycle infrastructure experts, Cyclehoop, have been contracted to supply, manage and maintain secure cycle storage around Edinburgh. The capital will have the second largest on street cycle storage network in the UK.

They have begun installing the units, each of which hold six bikes and will be available to residents for use.

In 2018 members of the Council’s Transport and Environment Committee agreed to introduce 180 secure, on-street bike parking units across the city, installed over two phases.

The council hopes to encourage cycling by offering a safe space to store bikes. The storage space costs £72 per year for each bike.

Vice-Convener of Transport and Environment, Cllr Karen Doran, explained that she had first seen these hangars a couple of years ago in the London borough of Walthamstow. She said: “It’s been quite a few years since the Convener and I first saw them in London. Cyclists have to pay £6 a month for this bike storage and we are told that they are very secure.

“This is provided by Cyclehoop with half and half funding from Sustrans and The City of Edinburgh Council. It is a bit like the bike hire scheme. You can actually get these for the city without it costing the council anything much. That is what we aim for in all these different projects, getting as much grant funding as we can. The council does not have any money, so we have to look at other options.

“The council is spending £300,000 on this project which is being matched by Sustrans.”

The Bikehangar is designed and manufactured by Cyclehoop offering a secure solution to long-term cycle parking. It is effective against weather and vandalism. There will be six bikes stored within half the space a car would take up. The hangars are made of galvanised steel and have a gas sprung door. Sadly cargo bikes are probably too big for this storage – the allowable dimensions are L 1800mm H 1200mm and W 750 mm.

We are told that Councillor Maureen Child has become the proud new owner of a cargo bike, so she will not be able to use one of these hangars – but we are sure she will have made her own arrangements for her shiny new steed.