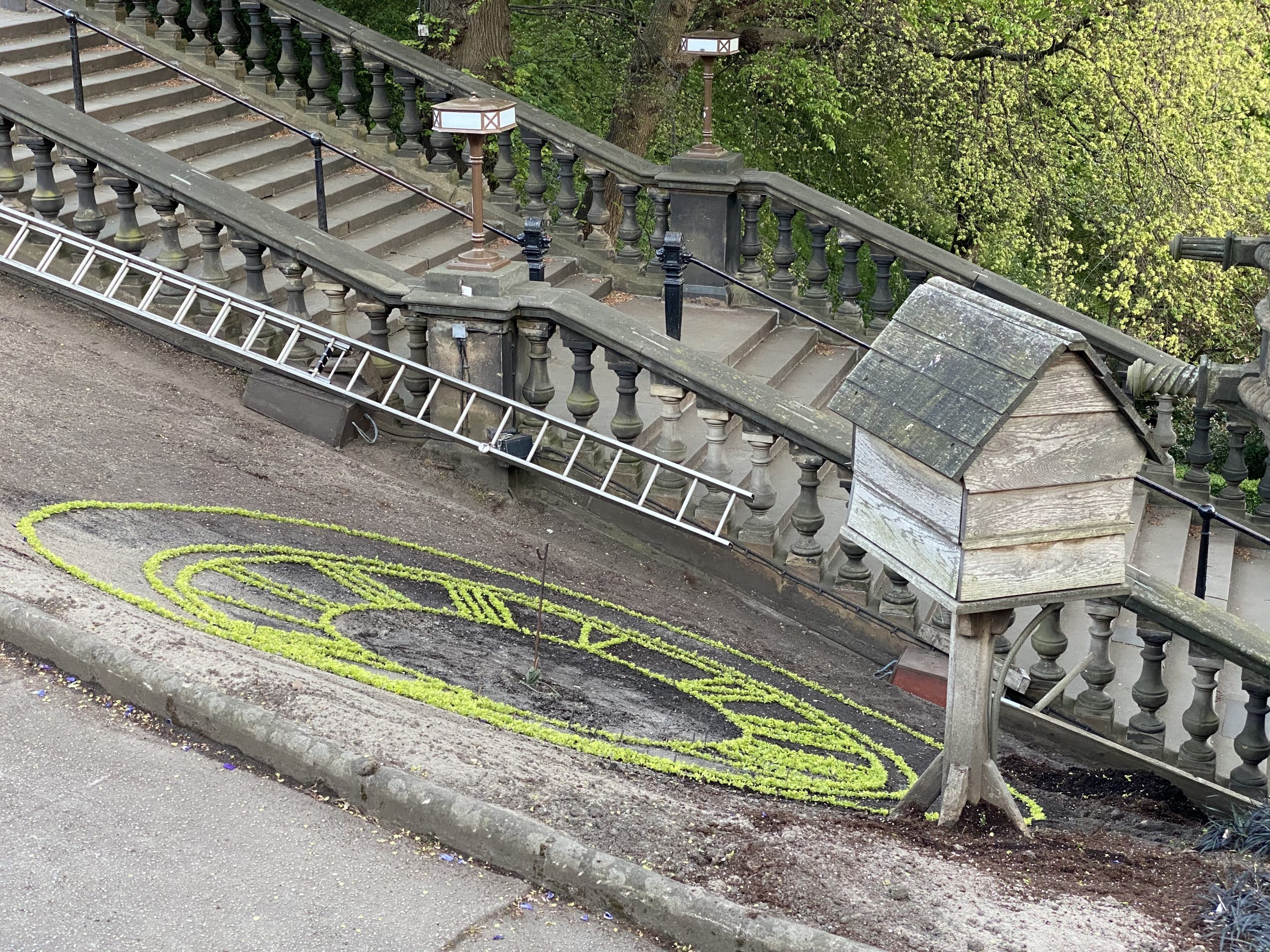 Walking in Princes Street the other day we noticed that work has begun on this year’s Floral Clock.

The council has confirmed that the clock will indeed be planted although it will not actually tell the time as remedial works due to be carried out are not possible at this time.

In a change to plans for the clock’s 2020 design, it will carry a message of thanks from the city to NHS and key workers and as a tribute to those working hard through the Covid-19 outbreak.

Until April, this year’s design was to be a special commemoration of the 350th anniversary of the Royal Botanic Garden Edinburgh (RBGE). The redesign comes with RBGE’s full support and the council says it looks forward to working with RBGE in the future.

The parks team responsible for creating the clock have unveiled their design, which will be a colourful tribute to those who have kept the city moving as well as their counterparts across the country.

The City of Edinburgh Council Leader Adam McVey said: “Our legendary floral clock will be paying tribute to the ongoing hard work of the NHS and key workers who we’re so proud of.

“People love to see the clock every summer and it’s undoubtedly one of our Capital’s most cherished attractions. My hope is – once it is safe to do so – the clock can be enjoyed by all.

“Huge thanks to our fantastic parks team who have put together the design and are currently hard at work to realise their vision.”

City of Edinburgh Council Depute Leader Cammy Day added: “The team have excelled themselves once again and I very much looking forward to seeing the final clock and hope all NHS employees and key workers in Edinburgh will be able to visit and enjoy the floral tribute.

“We have seen the city working together in many ways and showing great appreciation for NHS and key workers and I would like to thank RBGE for forgoing their celebration this year and look forward to working with them in the future.”

The Floral Clock was first created in 1903 by then Edinburgh Parks Superintendent, John McHattie, and is the oldest of its kind in the world. It initially operated with just an hour hand, with a minute hand added in 1904, followed by a cuckoo clock in 1952. Until 1972 the clock was operated mechanically and had to be wound daily.

Since 1946 it has been designed in honour of various organisations and individuals, including the Girl Guides Association, Robert Louis Stevenson and the Queen, for her Golden Jubilee. In the clock’s centenary year in 2003 it won a Gold medal at the RHS Chelsea Flower Show.

It will take the team of three gardeners six weeks to plant the 35,000-plus flowers and plants used to create the clock, which will be in bloom until October. There will be over 20 different plants included in this year’s design including numerous Echeverias, Sedums, Saxifrages and Pyrethrum.

Unfortunately, this year it will not be a fully functioning floral clock at first as important parts, due to the ongoing pandemic, are not available