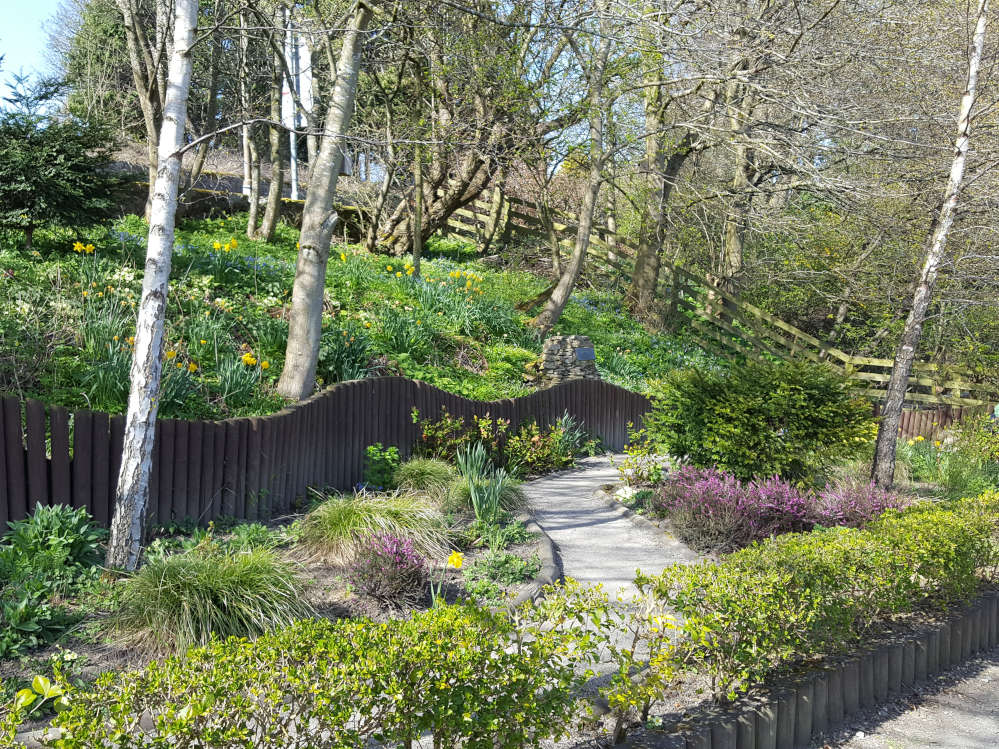 The Water of Leith is busy currently with cyclists who may have recently have whizzed past the neat and tidy garden (pictured above) at the Balerno end of the popular walkway without stopping.

Those new to the rapidly-expanding village, and even those who take a welcome break at the end of a walk, may miss the plaque placed mid-way on a wall.

It remembers the late Graham Priestley, a local resident who did sterling work on the river in conjunction with the Water of Leith Conservation Trust.

Graham was also an author: The Water Mills of the Water of Leith, published by the Water of Leith Conservation Trust in February 2000, details the era when the power provided by the river was harnessed to drive waterwheels in mills at more than 70 sites, establishing a string of
Villages.

The mills produced items including paper, flour, woollen and linen cloths, spices and snuff. Graham also underlined the importance of the river – fondly described as a silver thread in a ribbon of green – in developing Edinburgh as an industrial city.

The tidal mouth once provided a haven for ships, allowing the Port of Leith to flourish, and imports and exports through Leith included timber, wine, esparto grass for paper and whisky. The port also became a focus for shipbuilding and whaling. Then, the river was polluted, but the popular water, has now recovered.

Graham, however, had other interests. He played cricked for Currie and Balerno in the midweek
league and he was also a keen fly fishermen; his book Angling in the Lothians going to five editions.

He was the High Bailiff for the 24-mile long Water of Leith for 14 years and Graham knew every inch of the river. As a fly tying enthusiast, he passed on his knowledge through evening classes.

During these unprecedented times, when the river is closed to angling, many fishermen have time on their hands and are tying their own in prospect of the river re-opening.

Graham advised that both wet and dry flies are successful in the river and, in an article, he said: “Small sizes (14-18) are essential as is fine nylon. Popular dry patterns include Adams, Grey Duster, Olive Quill, Rough Olive, and Klinkhammer, while wet flies are Black Spider, Greenwels, Spider, Coch-y-Bondoh, Pheasant Tail Nymph and Gold- Ribbed Hare’s Ear Nymph.”

He added: “Stealth and caution are necessary and, in midsummer, the fishing can be best at dusk or after, when the bats come out. The upper river is well-guarded
by trees and bushes. Keep a watch behind, be resigned to losing a few flies and don’t expect the fishing to be easy!”

He is 100 per cent right. Fishing the Water of Leith of a summer’s evening is hugely-challenging but enjoyable none the less. The 14 miles of fishable river is closed during the current pandemic but angling normally starts from Balerno and the stretch to Bogg’s Bridge near the SAMH Redhall Walled Garden is reserved for fly fishing.

The season is normally from April 1 to September 30. Children under 12 years should be accompanied by an adult, for safety’s sake, though the river is mostly shallow. All fish must be returned and fishing is restricted to one rod per person and the rod must be hand held.

Anglers are reminded that all line and tackle should be removed from the water and an enthusiastic team of voluntary Honorary Fishery Officers patrols the river. They carry white
badges.

NOTE: Fishing is currently closed on the Water of Leith but angling is normally covered by a free permit issued by The City of Edinburgh Council and available from: The Water of Leith Centre (24 Lanark Road, EH14 1TQ—0131 455 7367); Post Offices at Balerno and Colinton; Fishing tackle shops (including Edinburgh Angling Centre, Gamefish and Orvis); and Molly’s Coffee Shop, Juniper Green