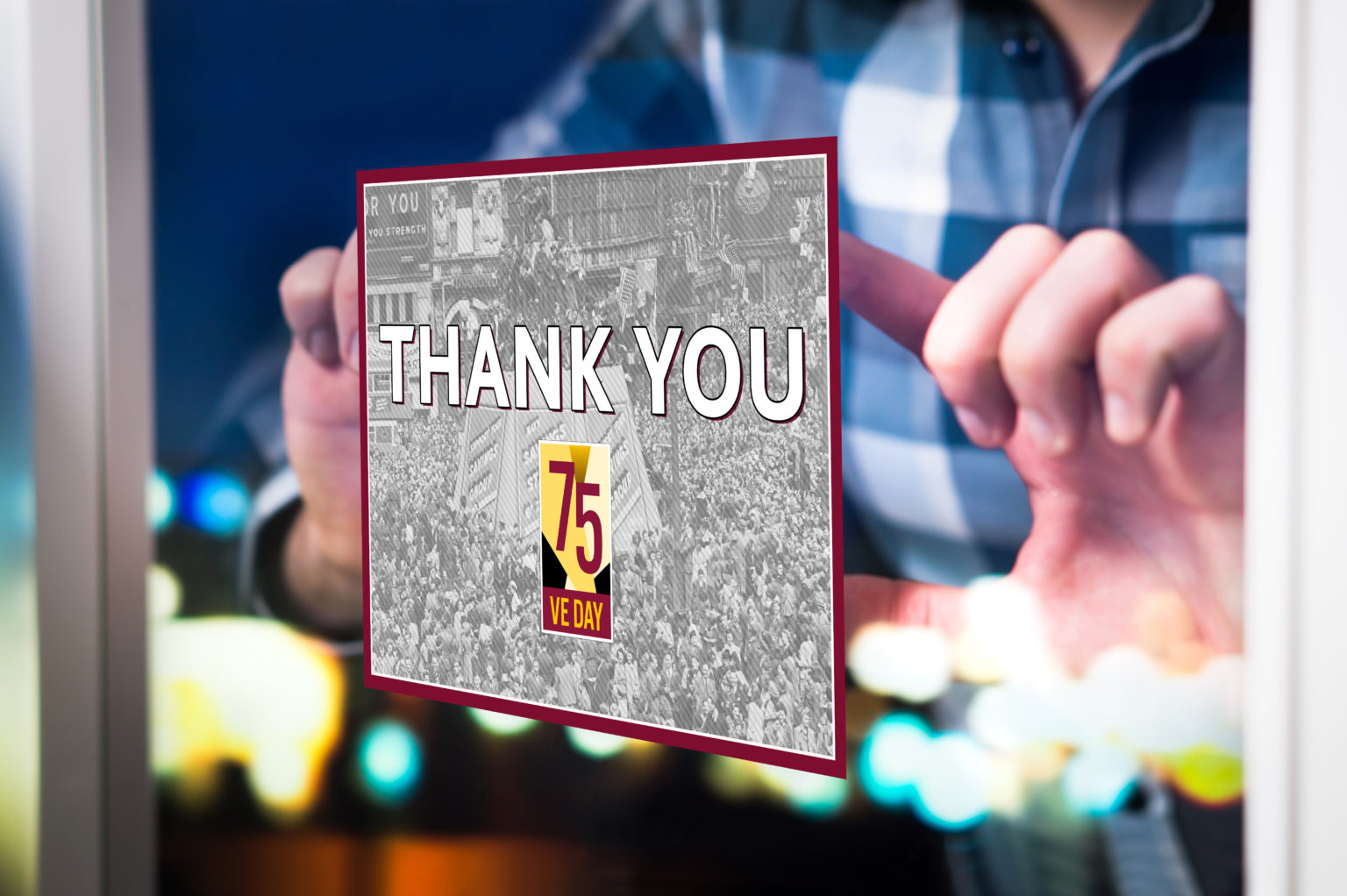 A two minute silence will be held tomorrow 8 May 2020 at 11am, to remember and thank those who fought during the Second World War.

The government is urging people to celebrate, despite the scaled down nature of the national holiday during the coronavirus lockdown. If you are looking for ideas for home schooling today the Department for Digital, Culture, Media and Sport has produced a template pack so that you can hold a 1940s style afternoon tea party at home, complete with homemade VE Day bunting, original recipes, games, and educational and creative activities for children.

On BBC One at 8pm and in partnership with the Royal British Legion, Sophie Raworth will host a musical celebration for VE Day 75. VE Day 75: The People’s Celebration, will attempt to unite the nation in front of the television to salute the World War II generation.

Until the current Covid-19 crisis struck, there had been plans to stage celebratory events and street parties in every nation. This has all had to be cancelled and the WWII generation, are at home in lockdown along with everyone else.

Filmed in an iconic London location and featuring some of Britain’s biggest talent across the evening, stars will deliver unique versions of well-known songs from the 30’s and 40’s, with much loved favourites such as Bluebirds Over The White Cliffs Of Dover and When The Lights Go On Again. The line-up includes Katherine Jenkins, Adrian Lester, Anton Du Beke, Shane Richie, Emma Barton, Beverley Knight, Helen George and Sharon D Clarke.

Her Majesty The Queen will send a message to the nation at 9pm on BBC One, the exact time her father King Georg VI made a radio address in 1945. This will be followed by a national singalong of Dame Vera Lynn’s ‘We’ll Meet Again’. The government urges everyone to open their doors to join in the celebration, while the main Stay At Home message is still to be observed.

HRH The Prince of Wales will read an extract from his grandfather’s diary from 8 May 1945.

Members of the Royal Family, the Prime Minister and the Culture Secretary will take part in video calls with WWII veterans and the victory speech delivered by Sir Winston Churchill will be broadcast on BBC One.

Historian and broadcaster Dan Snow has been hosting history lessons for children all week. At 4pm on Friday, Dan will host a History Hit live on YouTube’s Timeline channel that will focus on a different aspect of the Second World War and aim to teach the public about the importance of VE Day.

The original plans spearheaded by the Prime Minister of a procession of veterans had to be scrapped during the coronavirus outbreak.

Culture Secretary Oliver Dowden said: “We owe an enormous debt of gratitude to the greatest generation that served in combat and on the home front during the Second World War.

“Whilst we now need to celebrate VE 75 in our homes and on our doorsteps, rather than in parades and street parties, I know the nation will come together to mark this historic occasion.

“In these difficult times, acts of remembrance are even more poignant and I am sure that millions will want to join me to remember and give thanks to those who gave so much to secure peace, freedom and prosperity in Europe.”

Graeme Dey, Scottish Government Minister for Veterans said:“The upcoming 75th anniversary of VE Day is a fantastic opportunity to remember and thank our Second World War generation for the many personnel sacrifices they made – both at home and abroad, both in and out of uniform.

“If it weren’t for their efforts, we wouldn’t enjoy the many freedoms which we now take for granted. I look forward to joining with the rest of the nation on May 8th to pay tribute to them.”

PROGRAMMES TO WATCH DURING THE DAY

BBC Teach Bring The Noise, in collaboration with the National Memorial Arboretum, in Staffordshire, has launched an online singing and music education activity to inspire children aged 4 to 7 to learn new music-making skills to commemorate VE Day 75. Whether at home with family or with teachers at school or working virtually, children can learn to sing along and perform the bespoke Bring the Noise campaign song Take You Home, and reflect on the impact that leaving, missing and coming home had on those who served and their loved ones. See more here.

Radio 4 Extra marks the 75th anniversary of VE Day with an adaptation of Stephen Lowe’s Touched, Saturday 9 May at 06:00 (repeated 16:00). The haunting reality of post-war life for three sisters in Nottingham in the 100 days between VE and VJ Days. Originally broadcast in 1985, starring Sian Thomas, Joanne Pearce, Sara Mair-Thomas and Mary Wimbush.

Rt Rev Colin Sinclair, Moderator of the General Assembly of the Church of Scotland, has asked church members to pray as they remember the 75th anniversary of VE day, Friday 8 May 1945, when the Second World War ended in Europe.

He said: “It is too easy to get so focused on the impact of Coronavirus that we forget other important aspects of life and of our history.

“This week we mark the 75th Anniversary of VE Day. Although there are increasingly few veterans of that War still alive, the world we live in was shaped by the outcome of the Second World War.

“When it happened, while the war in the Far East still had three terrible months to run, the nation rightly celebrated the ending of a conflict in which so many both military and civilians suffered.

“The hope and prayer then, and still is today, was that war would be consigned to history and the nations would work together to build a better world in days of peace.

“For that we still work and pray, but on VE Day we pray and remember.”

Prayer for the 75th Anniversary of VE Day

Trusting the promises of God,
and with faith in his mercy,
let us pray to the Lord
on this the 75th Anniversary of VE Day
Let us pray.

Let us give thanks
for the selfless and courageous service

and sacrifice of those who brought peace to Europe,
and for the good example they have given us.

Let us pray for nations still devastated by war,
for their people and their leaders,
and for those who suffer
the effects or memories of past wars;
for veterans,
for those who mourn,
and for all innocent victims
whose lives have been shattered
by the cruelty of others.

Let us give thanks for those
who work for peace and liberty
throughout the world,
for the Armed Forces of the Crown,
and for all who strive
to bring an end to injustice and oppression.

Let us pray for those in our own day
who have grown weary or lost hope
as a result of violence or terror;
for all refugees and displaced people,
and for those who seek to address
the causes of discord and distrust.

Let us give thanks
for the reconciliation of former enemies,
for the flourishing of goodwill between them,
and for the many blessings we enjoy
as a result of the sacrifices
which have made for peace.

Let us pray for the young people
of our own day
and for all who will shape
the future of this nation,
that they may be inspired
by those who have gone before them
to serve as they have been served.

As generations before us fought for peace,that the world might never again know
such violence and destruction. may we work for peace and reconciliation
in our homes and communities,
and promote peace throughout the world.

As they fought for justice,
that the scourge of prejudice and oppression
might never again take root in our societies
may we work for a world
in which hatred and injustice
never have the final word,
and where all people
can flourish with dignity and hope.

As they struggled
so that the whole human family
might know good will, security, and freedom.
may we always acknowledge
how precious are the gifts
which God has entrusted to us,
and exercise the freedoms
and responsibilities we have
with gratitude and humility.

So we pledge ourselves to serve you
and all humankind, in the cause of peace,
for the relief of want and suffering,
and for the praise of your name.
May almighty God, who has given us
the will to undertake these things,
bless us with the strength to perform them.
Guide us by your Spirit;
give us wisdom; give us courage;
give us hope;
and keep us faithful now and always.