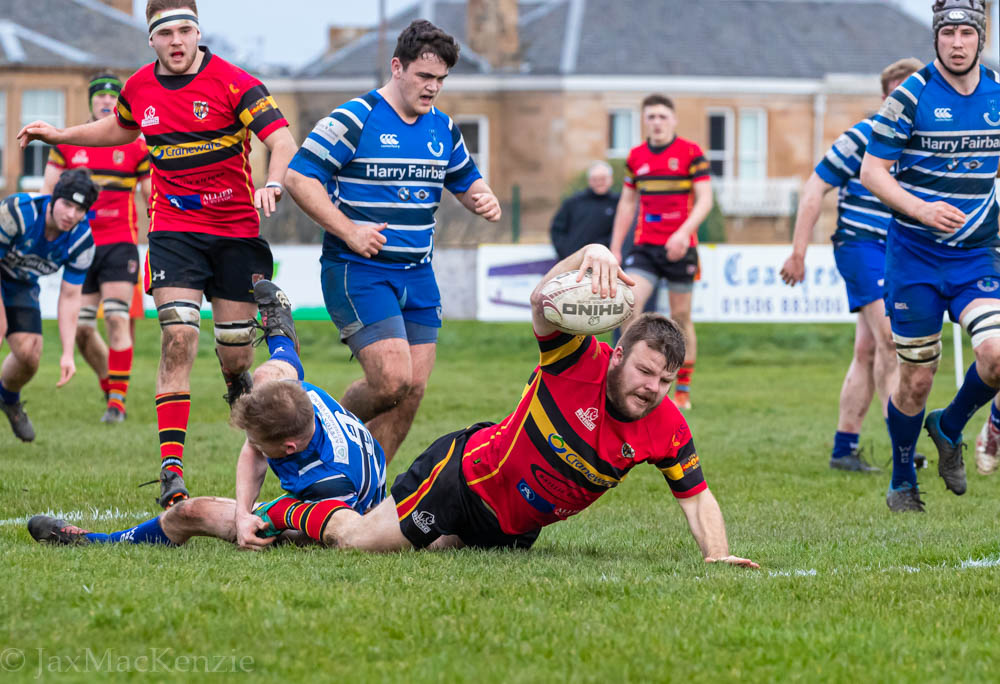 Some changes in Stewart’s Melville’s back line for the visit of Whitecraigs on Saturday saw Geoff Angco and Jamie Thompson come in at 12 and 11, respectively, due to injuries sustained by Euan Morrison and Adam Greig.

To say Stew Mel had a good start playing towards Ferry Road would be an understatement. As in a significant number of games this season, it wasn’t long before the crowd were treated to the sight of Scott Alldritt making an impressive break. The ball was moved with urgency thereafter, but, unfortunately, a knock on meant the first scrum of the afternoon around the Whitecraigs 22.

A great drive saw Stewart’s Melville winning back possession and Captain Fraser Morrison was soon over for the first try with just over a minute played. It wasn’t long before Darren Miller, Willie Malcolm and, Joe Bailey combined to score the second, with Bailey having the final say. So that was two tries in three minutes with Euan Bowen converting both. Stewart’s Melville 14 – Whitecraigs 0.

At the restart Whitecraigs managed to make some ground within the home 22, but they couldn’t hold on to possession. A good scrum and a Fraser Strachan boot put Stewart’s Melville back within the Whitecraigs’ half where the ball was wrestled out of a visiting player’s arms by Doug Randall. The resulting ‘chip’ was, however, too far.

That led to a Whitecraigs’ scrum at the halfway line, and it was not long before Scott’s turnover resulted in a line out 10 meters out. A combination of James Ferguson, Fraser Strachan and Jamie Sword then made progress towards the line but were held up.

It wasn’t too long, however, before further pressure led to another try, Doug scoring with Euan adding the extras. 15 minutes played, Stewart’s Melville 21 – Whitecraigs 0.

As play resumed a midfield combination of Geoff Angco and James Ferguson led to Scott Alldritt popping up and exploiting the width. Doug Randall was involved once more, quick recycled ball allowing Sean Murchie, coming off the right wing, to burst through the centre and score. 17 minutes played, Stewart’s Melville 28 – Whitecraigs 0 and the try bonus point.

A kick through by Stewart’s Melville was well picked up by Whitecraigs and then their winger Edmund Abekhe took off, almost running the length of the pitch and breaking numerous tackles en route before James Ferguson put in an all important try saving tackle.

Another big boot downfield by Fraser Strachan resulted in a penalty against Stewart’s Melville for a high tackle, allowing Whitecraigs to enjoy a bit more possession that ended with a drive towards the home side’s line. However the visitors found themselves forced into touch a short distance out, and momentum was lost, allowing Stewart’s Melville to clear their lines.

The aforementioned Whitecraigs speedster was certainly a danger, and, had he not had to leave the pitch towards the end of the first half, it’s fairly certain he would have been on the score sheet.

Whitecraigs were still making breaks in midfield but were being well marshalled, albeit they were soon the beneficiaries of another penalty. Some good counter rucking by Stewart’s Melville soon, however, allowed us to regain possession. Further pressure then lead to Darren Miller driving over for another converted try to make it Stewart’s Melville 35 – Whitecraigs 0.

As half time approached, Stew Mel were again in the ascendancy and this time space was created for Jamie Thompson to sprint in from the corner, making it Stewart’s Melville 40 – Whitecraigs 0.

With a few minutes remaining in the half, Whitecraigs put some good phases together and were soon over for a well deserved try. Half time: Stewart’s Melville 40 – Whitecraigs 5.

A couple of changes, for the home side, at the beginning of the second half saw Michael Miller in at 10 and Joe Bailey replaced by Ben Dollery. Dollery made an immediate impact and was soon on the scoreboard, which now read Stewart’s Melville 45 – Whitecraigs 5.

From the restart, Stew Mel were driving forward once more, and, after a strong scrum at the halfway line, James Ferguson managed to get involved in the battle of possession. He duly won that battle and only had to make a short sprint to the try line. 42 minutes played, Stewart’s Melville 50 – Whitecraigs 5.

Fraser Morrison was the next one to retire, replaced by number 16 Stephen Spowart. A scrappy period then ensued, with both teams looking for a bit of structure, though our good hands and support lines soon returned.

Much to their credit, Whitecraigs were quick to get things going whenever opportunities arose, despite being under the cosh. Home side pressure continued, though, and it wasn’t long before Doug Randall was over for another try with Michael Miller converting. 60 minutes played, Stewart’s Melville 57 – Whitecraigs 5.

Randall was then given a well earned rest as Joe came back on, this time propping things up. Another try soon came, and, with around 20 minutes left, the score was Stewart’s Melville 62 – Whitecraigs 5.

There was still more to come, though, and Ally Scott had the final say of the afternoon to make the final score Stewart’s Melville 69 – Whitecraigs 5. Eleven tries, only four of them unconverted – not a bad afternoon’s work.

It’s difficult to say much after what was a fairly one sided affair, but, to their credit, the opposition had a go whenever they could, and, as said, perhaps could have managed at least another try as both wingers were constantly threatening. It’s been a tough season for Whitecraigs and it has to be assumed that they will now have to consider where they go to next.

As for Stewart’s Melville – now two points clear at the top of NL2 with a game in hand over second-placed Dumfries Saints – it has to be only one way, and that’s onwards and, hopefully, upwards.