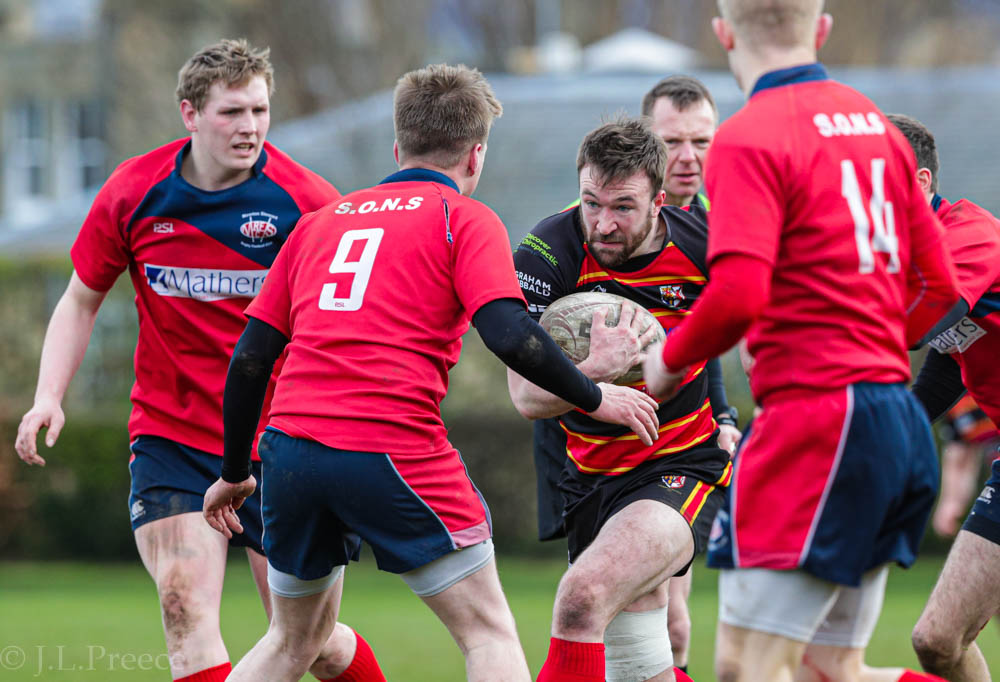 For, in all probability, the final match for this season, Newton Stewart made the long trip up from deepest, darkest Dumfriesshire to Inverleith for their Tennent’s National League 2 encounter with, division leaders, Stewart’s Melville.

The relatively relaxed demeanour of the previous week’s encounter with Whitecraigs was quickly banished from the memory as the Stewart’s Melville produced a rather disjointed and lacklustre first half performance against a youthful Newton Stewart XV.

The reason for this was difficult to fathom. Perhaps the urgency and desire for 5 league points caused a certain amount of nervousness, but, to be fair, the men from Bladnoch Park played with both imagination and no little skill.

Their backs showed creativity and the ability to open up a defence while the forwards managed to contain Stewart’s Melville’s set piece dominance. This was particularly evident in the scrum, where, on their own head, and inventive use of ‘Channel 1 ball’ (if there is still such a thing), coupled with a fast pick up from their No. 8, allowed them to breach the gain line even from retreating possession.

The visitors’ entire back row, in fact, was excellent, while scrum half Robbie McCornick used his passing skills to ship the ball out to his dangerous centres at every opportunity.

The half finished with multiple 5 metre scrum penalties to Stewart’s Melville but no more points (and no yellow card, much to the disgust of the home supporters!).

A Willie Malcolm try (converted by Euan Bowen) for the home side and a penalty by Jack Gaw for the visitors were the only things to trouble the scoreboard. A deserved, 7-3 lead at the break, but a lead riddled with frustration.

Obviously, things were said during the interval and this, along with a more ‘settled’ home scrummage and an increasingly strong line out platform, brought a completely different complexion to the remaining 40 minutes.

Two powerful scrums both rendered scores which seemed to soothe nerves – both on and off the pitch – and, from there, the Stewart’s Melville performance increasingly mirrored the continuity rugby of the previous Saturday.

Against a valiant, but tiring, defence, line breaks were made and, crucially, supported, offloads stuck and slick movement of the ball, by both backs and forwards, created numerous scoring chances.

Three were taken by the forwards through a brace from talismanic Stew Mel number 8, Scott Alldritt, and another from Chris Baikie, and the equivalent number by the backs courtesy of Fraser Strachan, Jamie Thompson and James Ferguson.

The tries by Strachan and Ferguson, in particular, were long range crackers that really caught the eye.

Replacement Fyfe Paterson scored a well deserved consolation try for the visitors in the second half when he drove home in the corner.

Alldritt also picked up a yellow card, for squaring up to an opponent off the ball, in the second period. The visitors’ prop Ross Campbell also ‘enjoyed’ 10 minutes on the sidelines as the home pack started to rack up the pressure in the set piece.

A final score of 45-8 suggests a comfortable afternoon but this would be inequitable to Newton Stewart, who have proved to be very worthy opponents to everybody in the league. They troubled the Stew Mel defence on several occasions and it was only in the final quarter that the home side really managed to cut loose in attack.

It was great for the home support to see Alex Rappestad returning to the 1st XV fold and Connor McKay coming back from injury for Stewart’s Melville.

With the league suspended for the foreseeable future and great uncertainty as to how things might be resolved, it was immensely pleasing to see the game concluding in some style to highlight Stew Mel rugby.

Whatever materialises, congratulations are due to the coaching staff and the players for their efforts this season. To be sitting on top of such a competitive league with 4 games to go – and anything could happen! – is no mean achievement for the Inverleith side.

Jackie MacKenzie’s gallery will appear here over the next few days.