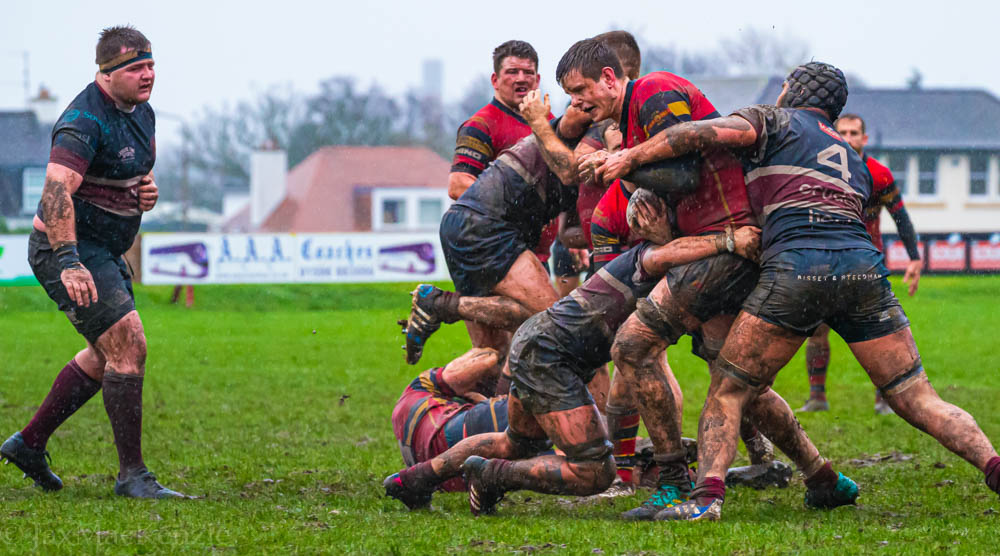 In a repeat match-up of the previous weekend’s Cup game, Preston Lodge once again visited Inverleith, this time, for the latest round of the Tennent’s National League 2. Despite the blustery conditions, courtesy of Storm Dennis, healthy support turned out for both sides.

Unlike their previous encounter, Stewart’s Melville started strongly, playing into the wind towards the Castle, and the pressure within the first 5 minutes ultimately led to a kickable penalty for Euan Morrison. That made it Stewart’s Melville 3 – Preston Lodge 0.

At the restart Scott Alldritt took the ball cleanly and his green laced scrum cap was off once again. Preston Lodge conceded a penalty around the halfway line and Stewart’s Melville applied more pressure, although PL managed to win the ball back, and, this time, it was their turn to apply the same within their own half.

A knock on soon switched the advantage in Stewart’s Melville’s favour, but, unfortunately, despite an impressive drive, this fizzled out due to yet another knock on. Scrummaging followed, then there was a penalty in the visitors’ favour, which they took quickly to advance into Stewart’s Melville’s 22.

The home side’s well organised defence, epitomised by Joe Bailey disrupted PL’s momentum, however, forcing them to change tactics and kick. They did just that but failed to take the wind into consideration and the impetus was lost.

Stewart’s Melville were back in the driving seat, and, for once, the penalty count appeared to be in their favour, giving the opportunity for, in particular, the midfield of James Ferguson and Euan Morrison to get over the gain line.

It wasn’t long before another penalty came Stew Mel’s way, followed by a line out and a scrum directly in front of the PL posts as the pressure continued. PL turned the tables, however, clearing the ball out of the danger area, only for the kick to be well fielded by Adam Greig, play then resumed in the contact areas.

The continued pressure in PL’s 22 didn’t result in points, though, and, with 25 minutes played, the 3-0 scoreboard told its own story.

Preston Lodge were enjoying more possession by this time and were back in Stewart’s Melville’s half with a line out on their 22, but a great steal by Jamie Sword, coupled with the forwards collectively securing the ball, allowed Fraser Strachan to clear the lines – not very far, but far enough.

A tireless effort from the forwards followed, going through the phases and enabling the backs to enjoy some of the ball as the home side attacks were launched once more. Again the pressure on PL’s 10m line led to nothing, due, primarily, to the visitors’ strong defence.

A similar pattern of play to what had been seen earlier in the half began to unfold, with opportunities being lost when a try seemed to be a certainty. As half time approached it was just not to be, and, with Stew Mel enjoying a ‘comfortable’ 3 point margin, it was all to play for in the second half.

A familiar pattern of play unfolded in the early stages of the second half before a kickable penalty for the home side at last brought about a change on the scoreboard with 45 minutes played: Stewart’s Melville 6 – Preston Lodge 0.

PL were struggling to get out of their own half at this stage, and, as the unrelenting pressure continued, the try finally came, with Scott Alldritt touching down for Stew Mel, with his fellow forwards omnipresent during the lead up. Morrison’s attempted conversion almost made it but was denied by a combination of the crossbar and the unpredictability of Storm Dennis once more. 58 minutes played, Stewart’s Melville 11 – Preston Lodge 0.

Stewart’s Melville were definitely in the ascendancy and the majority of play was being confined to PL’s half. Again their impressive defence prevented more tries until the deadlock was finally broken after a series of attacks. This time it was Morrison who breached the line for the try and then went on to convert his own try. At 18-0 and with time running out, this was a genuinely comfortable margin and was to run out as the final score. Stewart’s Melville 18 – Preston Lodge 0.

A good afternoon from Stewart’s Melville’s perspective. PL were strong opponents and may have felt that they could, at least, have put some points on the board, but credit must go to both teams for playing some decent rugby in unfavourable conditions.

Although top of the league once more, the number of games played have pretty much evened out across the teams at the top of the table and that table is still very tight. This can change very rapidly, as we all know – just like the inclement weather on Saturday.