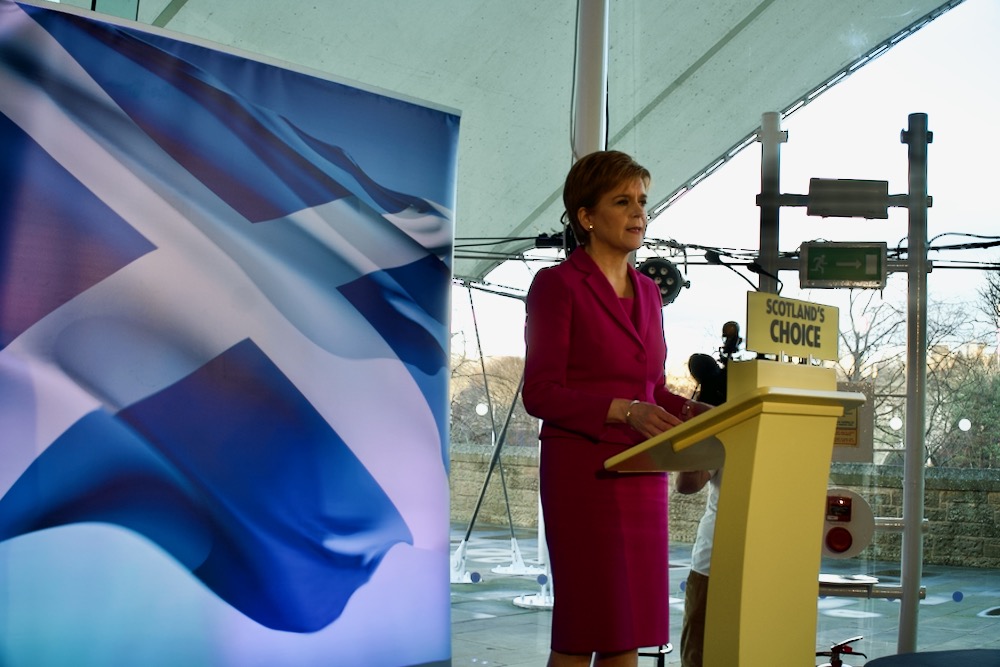 Earlier today at Dynamic Earth the First Minister Nicola Sturgeon called a press conference to speak to the people and also the Prime Minister.

The First Minister called a press conference this lunchtime at Dynamic Earth where she had launched the @theSNP campaign a few weeks back. We also spoke to @joannaccherry who seemed to be the only elected MP to make it along after a very late night. pic.twitter.com/b1ooTEe3Cl

Here is what she said to the assembled press :

“Thank you all very much for coming along here today. Now when I launched the SNP campaign in this very room just over a month ago, I could not reasonably have hoped for a more emphatic victory in this election.

“Last night, the SNP won an incredible eighty percent of seats in Scotland, an overwhelming endorsement of our campaign, message and vision. It is clear beyond any doubt that the kind of future desired by the majority of Scotland is very different to that chosen by much of the rest of the UK.

“Scotland has rejected Boris Johnson and the Tories and yet again, we have said no to Brexit. During this campaign, I said repeatedly that all elections are important of course they are. But that this one really mattered. I said that the very future of Scotland was on the line. Last night was indeed a watershed moment.

“So today as we reflect on the outcome, we should also look ahead.

“This morning I want to address both the people Scotland, and the Prime Minister directly.

“To the people of Scotland, I want to say a simple, but heartfelt thank you. Thank you for the overwhelming victory you gave the SNP last night. The SNP will never, ever take you for granted. We will continue to work every single day to earn your trust.

“However you voted last night, both in government and Holyrood and in opposition of Westminster, we will focus relentlessly on building a fairer and a more prosperous country for everyone who lives here. We will continue to promote the outward looking international values that are so firmly at the heart of the SNP vision in Scotland and we will do whatever we can to protect Scotland  from what I fear will be a deeply damaging Tory government. That means we will stand firm in our defence of our National Health Service, we will resist to the very best of our ability, the ultra Brexit Tory ideology, the race to the bottom on issues like biometric protections, food standards and workers rights and we will stand up for the rights of those, other European countries who have chosen to live here.

“And I want to briefly address them directly today too. I am very aware that for you, this may be the most difficult day since the morning after the Brexit vote. Let me say this again, and from my heart. You are welcome here. We value your contribution. And I will fight with  everything I have to protect your rights to call  Scotland your home.

“Now of course, elections can be invigorating but also bruising to many. Let me congratulate all those candidates last night but also commiserate with those who lost their seats. Despite the hard fought nature of this election campaign, I believe, and I hope that we can in Scotland now agree on two  fundamental points.

“Firstly, it is now clear beyond any doubt that the overwhelming majority of people in Scotland do want to remain in the EU.  That verdict was first delivered in the referendum in 2016. It was reinforced in the general election of 2017. It was strengthened in the European election earlier this year. And last night it was emphatically  confirmed Westminster  has ignored people in Scotland for more than 3 years. Last night the people of Scotland said enough.  It is time for Boris Johnson to start listening. I accept, regretfully that he has a mandate for Brexit in England. But he has no mandate whatsoever to take Scotland out of the European Union. If he presses ahead he will drive a coach and horses through the very idea that is supposed to underpin the UK, the idea that the union is a partnership of equal nations. And that brings into very sharp relief the second fundamental principle that I believe we in Scotland can unite around that Scotland’s future must be in Scotland’s hands. Now, I acknowledge that not absolutely everyone who voted SNP yesterday, is ready to support  independence.

“But the point of unity that I do believe exists is this one. Whether or not Scotland becomes an independent country must be a matter for the people who live here, and let me stress for all of us who live here, no matter where you come from. It’s not a decision for any Westminster Prime Minister. And certainly not for one who  suffered a crushing defeat in Scotland last night

“The Tories fought this campaign in Scotland on a single issue. They spoke quite literally  about nothing else. They bombarded  people in Scotland with the same relentless message day after day and night after night.  They said that a vote for them there was a vote to deny people in Scotland the right to decide our future. They said it was a vote to reject an independence referendum. So yesterday, the people of Scotland decided instead to reject the Tories.  The stunning election win last night for the SNP renews reinforces and strengthens the mandate we have from previous elections to offer the people of Scotland  a choice over their future. That mandate says that this is for the Scottish Parliament, not a Westminster government to decide whether and when there should be a new referendum on independence. So given the verdict of the people Scotland last night, the Scottish Government will next week publish a detailed democratic case for a transfer of power to enable a referendum to be put beyond legal challenge. I have been clear that a referendum must be the responsibility of the Scottish Parliament.

“This is not about asking Boris Johnson or any other Westminster politician for permission. It is instead, an assertion of the democratic right of the people of Scotland to determine our own  future given what I fear a Tory government has in store for Scotland. That right to choose our own future has never been more important or more urgent. So to the Prime Minister let me be very clear. This is not simply a demand that I or the SNP are making. It is the right of the people of Scotland and you, as the leader of a defeated party in Scotland have no right to stand in the way of.

“In an independent Scotland, you will always get the government you vote for. We will have full control of the powers and the levers needed to build truly fair and more prosperous country.  We can take our place as a full partner with our closest friends in the rest of the UK and across Europe and the world.

“The people of Scotland have spoken it is time now to decide our future.”