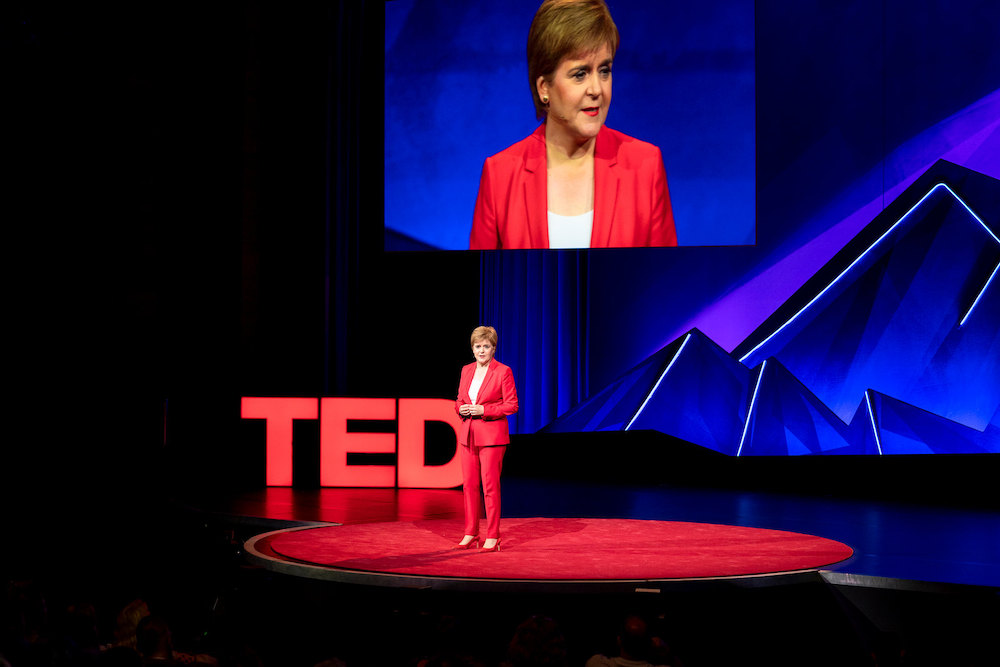 When TED came to Edinburgh it invited the First Minister to talk. She spoke about her vision for making collective well-being the main aim of public policy and the economy, and about the Wellbeing Economy Governments group.

This is the transcript of her talk :

“Just over a mile away from here, in Edinburgh’s Old Town, is Panmure House. Panmure House was the home of the world-renowned Scottish economist Adam Smith. In his important work “The Wealth of Nations,” Adam Smith argued, amongst many other things, that the measurement of a country’s wealth was not just its gold and silver reserves. It was the totality of the country’s production and commerce. I guess it was one of the earliest descriptions of what we now know today as gross domestic product, GDP.

“Now, in the years since, of course, that measurement of production and commerce, GDP, has become ever more important, to the point that today — and I don’t believe this is what Adam Smith would have intended — that it is often seen as the most important measurement of a country’s overall success. And my argument today is that it is time for that to change.

“You know, what we choose to measure as a country matters. It really matters, because it drives political focus, it drives public activity. And against that context, I think the limitations of GDP as a measurement of a country’s success are all too obvious. You know, GDP measures the output of all of our work, but it says nothing about the nature of that work, about whether that work is worthwhile or fulfilling. It puts a value, for example, on illegal drug consumption, but not on unpaid care. It values activity in the short term that boosts the economy, even if that activity is hugely damaging to the sustainability of our planet in the longer term.

“And we reflect on the past decade of political and economic upheaval, of growing inequalities, and when we look ahead to the challenges of the climate emergency, increasing automation, an ageing population, then I think the argument for the case for a much broader definition of what it means to be successful as a country, as a society, is compelling, and increasingly so.

“And that is why Scotland, in 2018, took the lead, took the initiative in establishing a new network called the Wellbeing Economy Governments group, bringing together as founding members the countries of Scotland, Iceland and New Zealand, for obvious reasons. We’re sometimes called the SIN countries, although our focus is very much on the common good. And the purpose of this group is to challenge that focus on the narrow measurement of GDP. To say that, yes, economic growth matters — it is important — but it is not all that is important. And growth in GDP should not be pursued at any or all cost. In fact, the argument of that group is that the goal, the objective of economic policy should be collective well-being: how happy and healthy a population is, not just how wealthy a population is.

“And I’ll touch on the policy implications of that in a moment. But I think, particularly in the world we live in today, it has a deeper resonance. You know, when we focus on well-being, we start a conversation that provokes profound and fundamental questions. What really matters to us in our lives? What do we value in the communities we live in? What kind of country, what kind of society, do we really want to be? And when we engage people in those questions, in finding the answers to those questions, then I believe that we have a much better chance of addressing the alienation and disaffection from politics that is so prevalent in so many countries across the developed world today.

“In policy terms, this journey for Scotland started back in 2007, when we published what we call our National Performance Framework, looking at the range of indicators that we measure ourselves against. And those indicators are as varied as income inequality, the happiness of children, access to green spaces, access to housing. None of these are captured in GDP statistics, but they are all fundamental to a healthy and a happy society.

“And that broader approach is at the heart of our economic strategy, where we give equal importance to tackling inequality as we do to economic competitiveness. It drives our commitment to fair work, making sure that work is fulfilling and well-paid. It’s behind our decision to establish a Just Transition Commission to guide our path to a carbon zero economy. We know from economic transformations of the past that if we’re not careful, there are more losers than winners. And as we face up to the challenges of climate change and automation, we must not make those mistakes again.

“The work we’re doing here in Scotland is, I think, significant, but we have much, much to learn from other countries. I mentioned, a moment ago, our partner nations in the Wellbeing network: Iceland and New Zealand. It’s worth noting, and I’ll leave it to you to decide whether this is relevant or not, that all three of these countries are currently led by women.

“They, too, are doing great work. New Zealand, in 2019, publishing its first Wellbeing Budget, with mental health at its heart; Iceland leading the way on equal pay, childcare and paternity rights — not policies that we immediately think of when we talk about creating a wealthy economy, but policies that are fundamental to a healthy economy and a happy society.

“I started with Adam Smith and “The Wealth of Nations.” In Adam Smith’s earlier work, “The Theory of Moral Sentiments,” which I think is just as important, he made the observation that the value of any government is judged in proportion to the extent that it makes its people happy. I think that is a good founding principle for any group of countries focused on promoting well-being. None of us have all of the answers, not even Scotland, the birthplace of Adam Smith. But in the world we live in today, with growing divides and inequalities, with disaffection and alienation, it is more important than ever that we ask and find the answers to those questions and promote a vision of society that has well-being, not just wealth, at its very heart.

“Thank you very much.”

At the same time she was asked about the new Prime Minister Boris Johnson what Brexit might mean for Scotland :