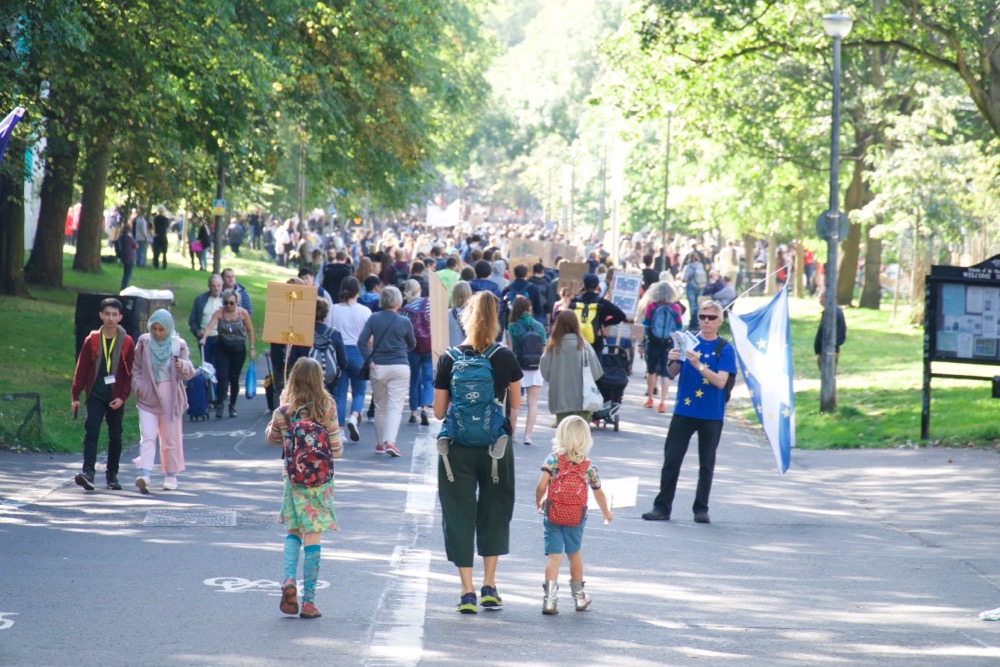 I was in The Meadows and spoke to some of young people taking part in the march just before it began.

Why do you think those in power aren’t paying enough attention to your cause?

Josie, 15, Broughton High School told me : “They just think it’s not a big issue.  They’re like, ‘Oh, somebody else will deal with it.  It’s not our problem’.  Whereas in actual fact it’s literally everybody’s problem”.

Tilly, 14, Tynecastle High School said : “It’s all about money.  All the government cares about is making money and looking after the environment isn’t going to get them any money, right now.  In the long term it’s going to save us money.”

What do you think it will take for your message to make an impact?

Josie said :“It will take a lot, which is why we’re here today.  It’s going to take all of us being here today together to let them know this is a big issue and until they recognise that we’re all here telling them.  It will take whatever it takes.”

Tilly said : “By doing this, everyone striking from school, Extinction Rebellion doing those protests in London and people protesting to show that they care about the environment is already helping. We’ve already seen change like the declaration of a climate emergency, but we just need more people to show they’re interested.  Eventually is so many people are involved in this, showing that they care, the government is going to have to something”.

Molly, 18, University of Edinburgh said : “Just by talking about it with family, not necessarily just going on strikes.  Day to day conversations amongst friends because it’s not as talked about between the generations.”

Kimberley, 15, St Kentigern’s Academy said : “I went on an expedition this year to Greenland and saw climate change.  Of course it’s real, but you don’t really believe it until you see it, so it’s an important issue that everyone should be campaigning for.”

Why do think having young people lead this cause is important?

Josie said : “It’s our future that is being thrown away so it’s us that are going to be directly affected and if not us, our children in the future so we need to show them what they’re doing.  Though it might not affect them it will definitely affect us.”

Tilly said :“It’s our future that the government is just toying with in their hands.  We’re the ones who are going to be especially affected by this global crisis.”

Edward, 14, Broughton High School commented :“It gets featured in the news, there’s a lot of people paying attention and every time we have a big strike the numbers go up so it’s obviously gathering a lot of attention and the fact that it’s the young people going away from school.”

What about Scotland’s position on this issue?

Tilly said : “It’s really good that we declared a climate emergency so already it’s shown we do care and that we want to make change but they need to enforce the change.  This is why we need to be here.  We need to make sure that they’re carrying out what they say they’re going to do.”

What do you think about climate change deniers?

Tilly replied : “It doesn’t matter how rich you are, how poor you are or what are of the world you live in, everyone is going to be affected.”

Edward said : “I feel like that is, without being offensive, ignorant of them to just think ‘If we can sit here, this is fine, nothing really matters, it’s not our big problem and we’ve got far more pressing matters’.  No.  You’re part of the problem why the Planet is dying.”

Kimberley said : “Just open your eyes.  Look outside, because it is happening right now.”

What do you think about environmental activist Greta Thunberg?

Molly said :“I think she’s great.  It shows people that children have a mind.  They actually think about important things, they don’t just mess about.  People view teenagers and youths as selfish and inward-looking.  It’s not true.  She shows that.”

Edward said : “She’s a wonderful person.  She’s done so much.  She caught the media’s attention.  She broadcast it around the world and she’s such an inspiring role model to me.”