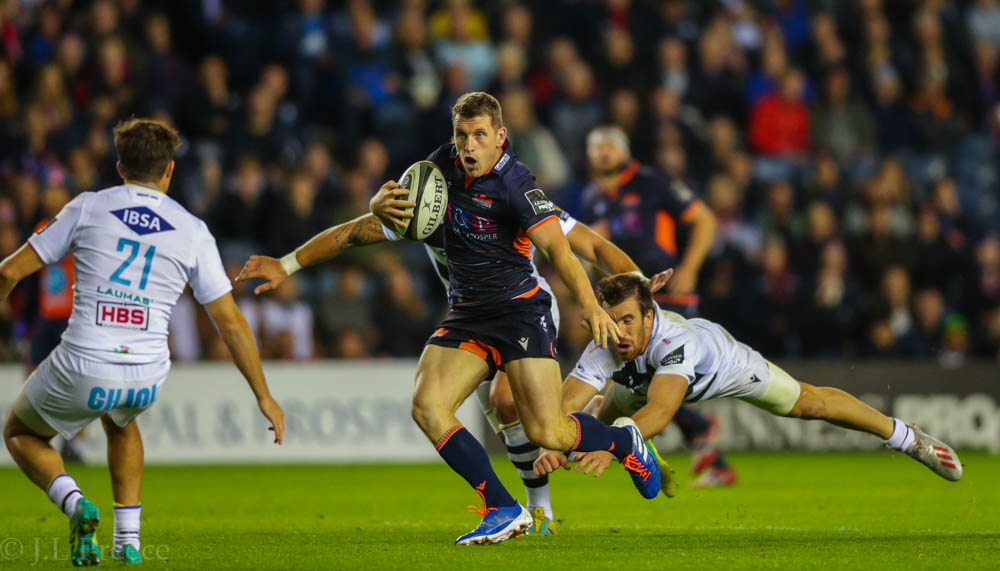 Italy’s Zebre were the first visitors to BT Murrayfield on Saturday evening as the 2019-20 Guinness PRO14 season got under way. With both teams having players away on World Cup duty, this match would be a test of squad depth as much as anything.

Six minutes in and it seemed that Edinburgh had the edge on depth. Winning back ball from the visitors, the home side won a lineout close in and drove over for the opening try. Fraser McKenzie claimed the touch down and Jaco van der Walt followed up with the conversion for 7-0.

Soon after the restart, Zebre were up in Edinburgh’s 22, testing the home defence and running hard at the line. Reward came with a penalty at the breakdown which No. 10, Francois Brummer slotted home for 7-3.

Holding Zebre into their own half from the restart, Edinburgh then came roaring back on the offensive, driving the visitors deep into their 22 and setting up a few metres out from the line. Somehow, scrum half, Nic Groom slipped the ball out to Mark Bennett and the centre trotted over to touch down while almost everyone else was looking the other way.

Bennett looked a bit guilty as he placed the ball, but the referee saw nothing untoward and awarded the try. Van der Walt then knocked over the kick for 14-3 with 17 minutes played.

Once again, from the restart, the receiving side – this time Edinburgh – came under immediate pressure.

Setting up about 10 metres out, Groom went for the box kick, but failed to clear the outstretched arm of Zebre’s 8, Givanni Licata.

As the ball ricocheted back over the line, Licata followed through and dived for the bouncing ball just short of the dead ball line. Referee, George Clancy was unsighted so went ‘upstairs’ where several angles confirmed the try. With the kick missed it, was 14-8 after 20 minutes of play.

Another Edinburgh try then came up three minutes later. Winning ball in the midfield, it was slung out to Duhan van der Merwe on the wing and the South African 11 broke through a couple of tackles before dropping the ball off the the following Groom. A big dive over the line from the No. 9 and it was 19-8, then 21-8 after van der Walt’s conversion.

The next 10 minutes or so were fairly even, although Edinburgh applied a bit more pressure to Zebre territory and the breakthrough came just after the half hour mark.

Once again, the ball went through the hands, ending up with Bennett. The centre came under scrutiny, but a neat dummy saw him past the first man. The second man in line wasn’t so easily fooled, but Bennett off-loaded to his fellow centre, Matt Scott and the No. 12 trotted in for the bonus-point try. Van der Walt converted again and, with 34 minutes played, it was 28-8.

The remainder of the half was mostly played at the visitor’s end of the pitch and Edinburgh won a ruck penalty just on the break which van der Walt slotted home for a half time score of 31-8.

From the restart, Zebre kept possession of the ball for a long period of time, but were unable to make much progress up-field. Their chance to clear came with a penalty for a high tackle by van der Merwe, but this served to open the floodgates of another wave of Edinburgh attacking play.

As the home side battered their way up the centre, the visitors were gradually driven back and it was Bennet who came up with the points again.

Storming down the middle of the pitch, the centre crashed through a couple of tackles before almost losing his balance after the third(-ish). He kept going, though, and his momentum carried him over the line for his second, and Edinburgh’s fifth, try and 36-8.

van der Walt once again converted for 38-8 with just under 10 minutes of the second half played.

The usual raft of substitutions then took place over the next period which seemed to lead to the match getting a bit bogged down, with neither side gaining the upper hand.

However, the upper hand was gained, briefly, by the visitors just before the 70 minute mark.

Winning a line out just inside the host’s half, the ball was passed to sub, Federico Mori in the middle of the pitch. A quick side-step later and he was in the clear, out-sprinting van der Merwe in the run in to dive over behind the posts. The conversion then made it 38-15.

With 10 minutes to go and well clear in the points, the question was would the home side be content to play out the last period?

On for Groom, Charlie Shiel made a superb break from his own half to gain many metres into the visitor’s half, leaving player strewn in his wake. Just before meeting the final defender, the scrum half dropped the ball off to on-for-the-hat-trick Bennett and the centre had an easy run in for the try.

Or, at least, that was thought to be it, but Edinburgh weren’t quite finished.

The seventh, and final try was scored just before the final whistle with Edinburgh, once again, on the attack This time there were very few hands involved as Hickey sent a pin-point kick across the width of the pitch for Jamie Farndale to run on to, and run in with, to bring up the 50 points for the match and a well deserved 50-15 win.