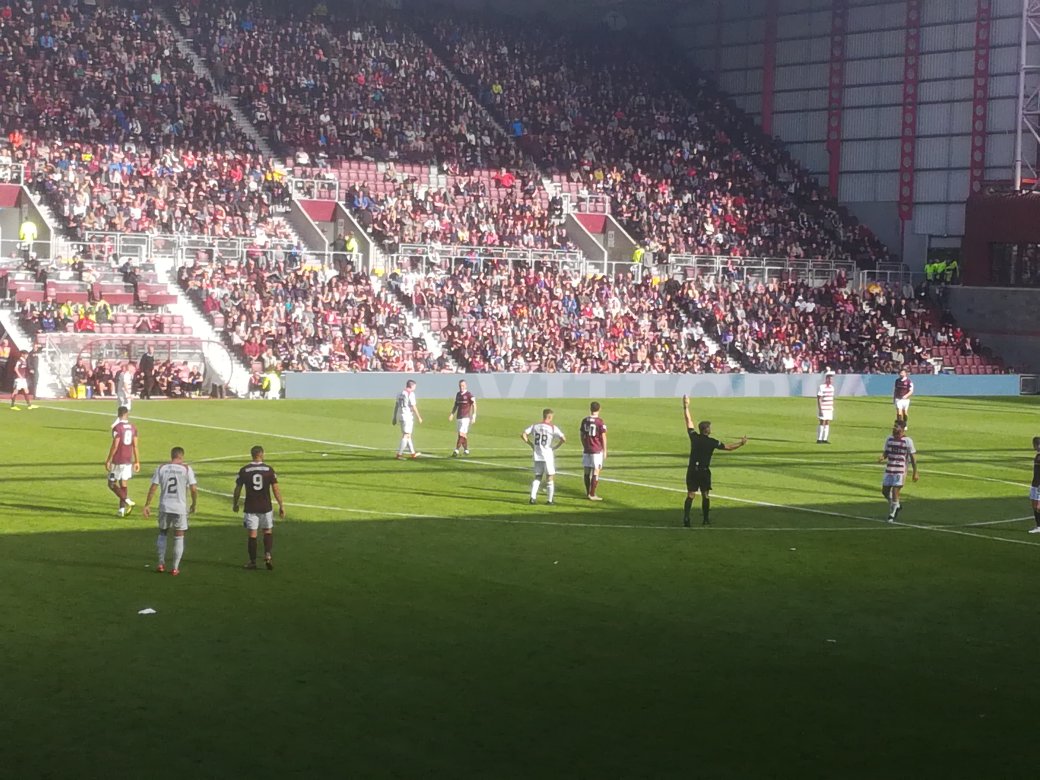 Hearts miserable start to the season continued at Tynecastle on Saturday afternoon as the Maroons twice gave away a lead to enable Hamilton Academical to leave Gorgie with a point.

Sean Clare gave Hearts the lead before Oakley equalised; Christophe Berra put the home side back in front only for Oakley to equalise again with the Hearts defence looking none too clever on both occasions.

The afternoon was notable for the tide of hostility against Hearts manager Craig Levein becoming stronger and more audible as the game wore on. There was a lot of anger inside Tynecastle as the final whistle below and Hearts owner Ann Budge can no longer ignore it.

Levein made three changes to the team that lost meekly to Celtic last Sunday. Hearts injury woes continue apace, and on-loan goalkeeper Joel Pereria and defender Michael Smith missed out while Loic Damour was on the bench. Their replacements were Colin Doyle, Aidan White and, somewhat surprisingly, Euan Henderson.

New Japanese singing Ryotaro Meshino was on the substitute’s bench alongside the welcome sight of Steven Naismith.

The lack of a decent sized travelling support meant Tynecastle assumed library proportions and there was little to get excited about in the early stages. Captain Christophe Berra headed over the crossbar from 12 yards in the 12th minute – a free header which didn’t hit the target being a taste of what was to come.

Mulraney then had an effort disallowed for offside before Hearts did take the lead in the 20th minute. Craig Halkett ran at the Accies defence before passing to Sean Clare who drove the ball past Fon Williams to put Hearts 1-0 ahead.

Young Euan Henderson was taken off after half an hour after receiving a somewhat brutal challenge and he was replaced by Ryotaro Meshino who took the acclaim of the Tynecastle crowd. Within minutes the on-loan Manchester City player fired in a shot on goal which went over the bar.

If the home support sat back waiting for a second half onslaught from their side they were to be disappointed. Five minutes after half-time, Christophe Berra allowed Oakley to get the better of him before the Accies man scored to draw his team level.

Seven minutes later with the home crowd becoming increasingly agitated, Hearts were back in front when Berra atoned for his mistake by heading home Jake Mulraney’s corner to put the Jambos back in front.

However, after Ogkmpoe rattled the Hearts crossbar, the home side’s defensive frailties came to the fore again when Accies equalised for a second time 17 minutes before the end. This time it was Sean Clare who let McGowan slip past and he passed to Oakley who netted his second goal of the game. 2-2 and Tynecastle became a hostile place – not for the Lanarkshire side but for home manager Levein who was subjected to chants of ‘we want you to go’ from the angry home support.

There endeth the scoring. Hearts remain without a league win this season and are second bottom of the Ladbrokes Premiership. Two home games against Ross County and Hamilton Academical have yielded just two points. Although Hearts played some decent stuff for part of the game it was nowhere near enough and the cacophony of boos at the end of the game told its own story.

I’m frustrated with us scoring two goals at home and not winning the match. Our defending wasn’t good enough today, that’s what hurts, because normally we’re very good at defending, even against two or sometimes three strikers. The goals we lost today were rubbish.”

“There were some positives to take from the game, including the partnership of the central midfielders.

“On the other side, Andy Irving had another really good match, Glenn Whelan too, we controlled the midfield in the first half, but we’ll need more if we keep defending like that.

“To play here isn’t easy, when things go well it’s fantastic but when they aren’t it’s very difficult to rise above and shine when others are nervous. The defensive side is easier to fix so at least I can take my frustrations out on the training pitch.”

“There were some moments of magic from Ryotaro Meshino, the problem was should he start or not? But with yesterday, the travel, the media circus, on top of flying in from Japan I erred on the side of caution.

“I didn’t want to just throw him in. I didn’t expect him to have to come on so early, I wanted to bring him on at 2 or 3-0 and make him have a comfortable experience but I didn’t have the chance.”

Ann Budge may think Levein is doing a fine job, but many fans think otherwise. Hearts next three games may well be pivotal in Levein’s future as the team’s manager. League games against Motherwell and Hibernian are followed by a League Cup quarter final with Aberdeen. It’s not inconceivable that Hearts could lose all three. If they do and no action is taken, the Foundation of Hearts may find contributions being affected until something is done.