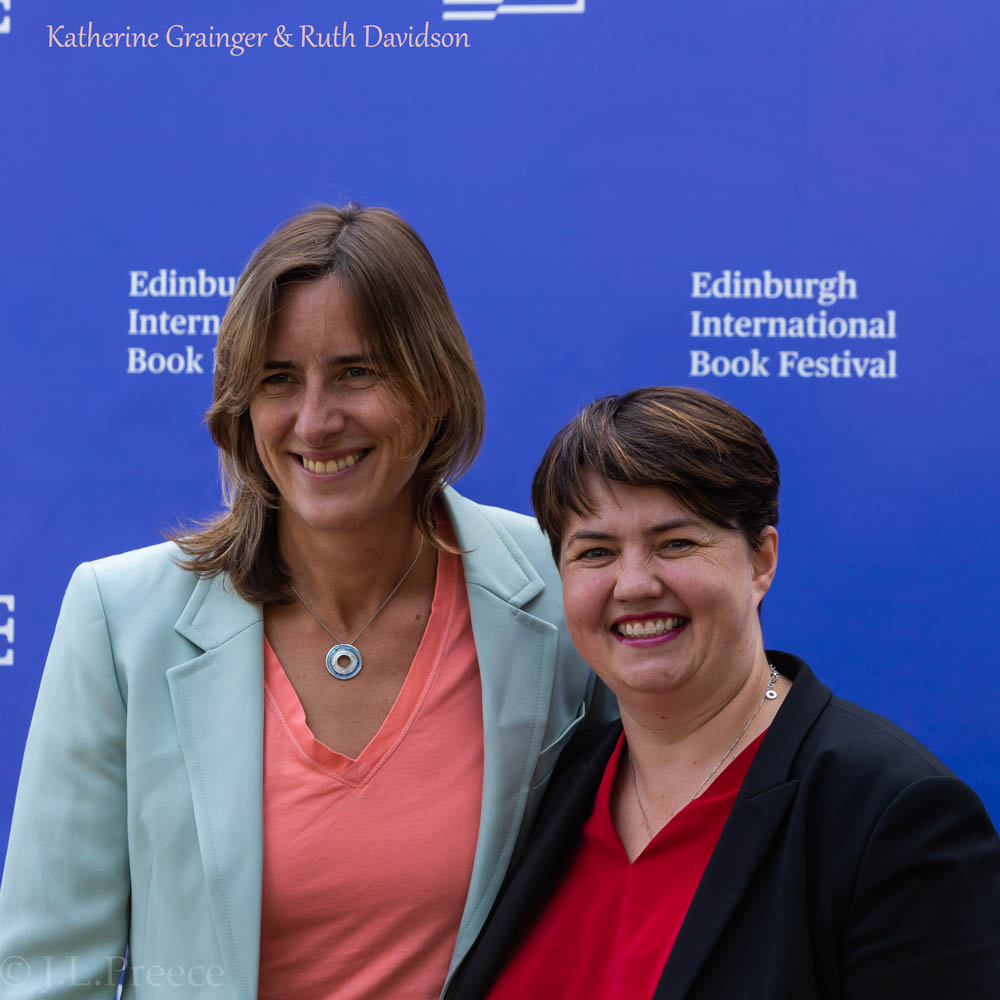 Dame Katherine Grainger interviewed the Rt Hon Ruth Davidson this evening at the Book Festival – although during the conversation it became apparent that roles were recently reversed.

It is possibly difficult to interview someone who is so central to our political landscape here in Scotland – in fact the New York Times Theatre in Charlotte Square is in her constituency – while the main concentration might be the book she has just written.

We learned a bit about the book, but there is a curiosity about Ruth Davidson, particularly about the fact that she went so silent during her maternity leave last year, ahead of the birth of baby Finn and after his early birth. So how did she do it? Well, it turns out that she was constantly on phone calls that perhaps in 30 years when the parliamentary papers are released we will find out about.

About her book we gleaned some nuggets, although nobody read from it during the event. There are profiles of women in there both important and unimportant, and she claimed : “I am the least important person in the book.” Although it was not clear if Angela Merkel makes it onto the pages of Davidson’s book, the German Chancellor is definitely a role model she admires.

In common with other events at the Book Festival, Brexit and Trump were both mentioned. (Oh and Boris got a look in too.) Davidson claims that she does not want a No Deal Brexit and wishes for more cooperation across the aisle. She said : “The ya boo sucks Punch and Judy does not serve the people well.” This from someone who can and does berate the First Minister at FMQs might ring a little hollow. But she does believe that compromise should not ‘be a dirty word’. She explained also that even if Theresa May’s deal was not perfect it was pre-approved by the EU and that ‘if the country is going to leave, there is no perfect deal out there. Brexit will be a process not an event and the part that comes next is the important part which will evolve much like devolution.”

How she is going to get on with Boris Johnson as Prime Minister was one of the more incisive questions from the floor. It allowed her to use some real military language (she reminded us more than once of her Army background). She said : “I was always taught to salute the rank not the person who wears it. If the Prime Minister does well the country will do well too, so I do want him to do a deal as I think that No Deal is not in the national interest.” She continued to explain that she had been in and out of Number 10 and has been fortunate to meet several Prime Ministers.

Davidson concluded : “I can say that there is no job that prepares you for being Prime Minister. My favourite Shakespeare play is Henry V but it is in Henry IV that Prince Hall turns into something better. I can only hope……”

We also found out that she has had several serious accidents over the years, but perhaps you already knew that she has one leg shorter than the other as a result of being run over by a truck? (Or perhaps it was after breaking her back in three places during TA training at the age of 25?) We might have already known that she used to be a journalist with the BBC and worked on radio. (If you’ve been to any of Grant Stott’s shows you will have heard clips from that.)

She has a fear of failure or letting people down, and had a bout of clinical depression when she thought she was ‘going mad’. It turned out she had a bad reaction to the drugs prescribed for her which she was careful not to name, as there have been others who suffered in the same way. She said : “I rebuilt myself from a place I will not ever go back to.” She left university with a degree and got herself a job on the Glenrothes Gazette, using any spare time for putting order back in her life with attending church and working hard.

She claims that she ‘slogged her guts out’, making sure that she met all her deadlines, but there came a point when she was fed up telling the stories, even though holding politicians to account was something she regarded as a ‘real privilege’ she really wanted to do something about it.

Since then her rise in politics has been meteoric, ascending to leader of the Scottish Conservatives within months of being first elected in 2011. Since finding herself at the head of an organisation which is worth hundreds of thousands of pounds with branches, volunteers and staff she said she has had to ‘learn how to bring people with me’.

She has undertaken a major overhaul of the party and its communications systems but her biggest failing is taking too much on and not being very good at delegation. That said she appeared to delegate any additions to their family to partner Jen suggesting that she will have the next baby.

Ms Davidson said : “The thing you are measured on is elections.” But nobody asked about whether her leader in Downing Street is about to call one, although Guido Fawkes seems to think he has gathered proof there will definitely be one this year.