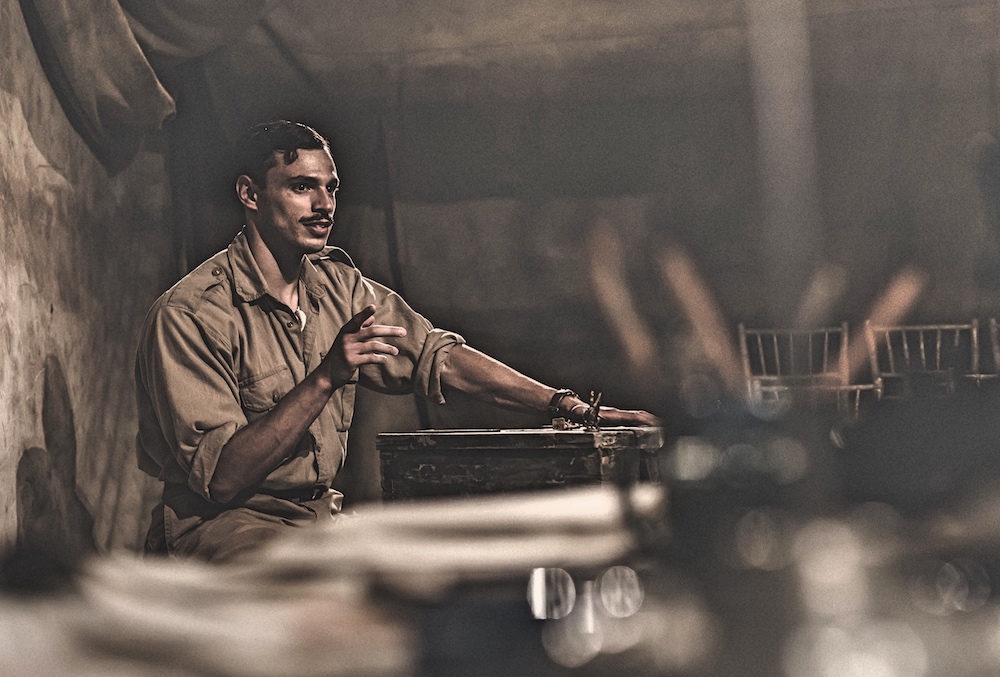 As part of Army@TheFringe Unicorns Almost will celebrate the life and poetry of Keith Douglas who is widely regarded as the best poet of the Second World War.

He had four engagements and died just three days after the Normandy D-Day landings. This play tells the story of his desperate race to get his poems printed.

Written by Welsh poet, playwright and novelist Owen Sheers, this has had a successful run in Hay-on-Wye and in Normandy during the 75th anniversary celebrations.

Listen to an extract here

The live performance takes place from 13-25 August 2019 and before that it will be presented as an immersive audio experience from 2-11 August. There is also an installation related to the play running throughout.

With direction by John Retallack, sound design by Jon Nicholls, and lighting design by Ben
Pickersgill, the set creates an immersive environment for a private audience with Douglas,
speaking from beyond the grave.

Keith Douglas’s work was championed by Ted Hughes at Faber & Faber, as an important influence on his own work. Hughes wrote the introduction to Douglas’s The Complete Poems, published by Faber. The prestigious independent publishing that celebrates its 90th anniversary this year also publishes the biography of Keith Douglas (by Desmond Graham), his memoirs, the play script of Unicorns, Almost and other titles by Owen Sheers. The play also references T.S. Eliot & Faber.

Each visitor will receive a letterpress printed poem sheet set and printed by hand by Incline Press in Albertus type, designed by Berthold Wolpe (known for his book cover designs for Faber & Faber) and used in the 1930s by the Ministry of Information. Camembert boxes from Normandy have been used to created overlapping circles printed in coloured ink. Unicorns, Almost has been developed with blind and visually impaired (VI) young people. The ‘Blind Bookworms’ have been involved in each stage of the creative process and have given constructive criticism to make the show a rich experience for a blind and VI audience.

Additional audio content, Braille material, and touch tours are part of the Unicorns, Almost
experience. Unicorns, Almost is produced by The Story of Books which aims to tell powerful stories in
creative ways to unusual audiences.

Audio Experience and installation: August 2-10 (not 5th) at 13:15, 15:15 & 17:15. August 11 at 13:15
Live show and installation: August 13-25 (not 19 th ) at 13:15
Duration: 60 minutes, followed by installation
 See www.Armyatthefringe.org
 Tickets are available at festival19.summerhall.co.uk/event/unicorns-almost
Army@TheFringe is presented by Army Headquarters Scotland as a way of engaging with wider society
through the arts and initiating discussion about soldiering.
The venue, which runs from 2 to 25 August, is staffed by soldiers who run the bar and front of house services, and who mingle with the public before and after shows.
Army@TheFringe is at Hepburn House, East Claremont Street, Edinburgh.