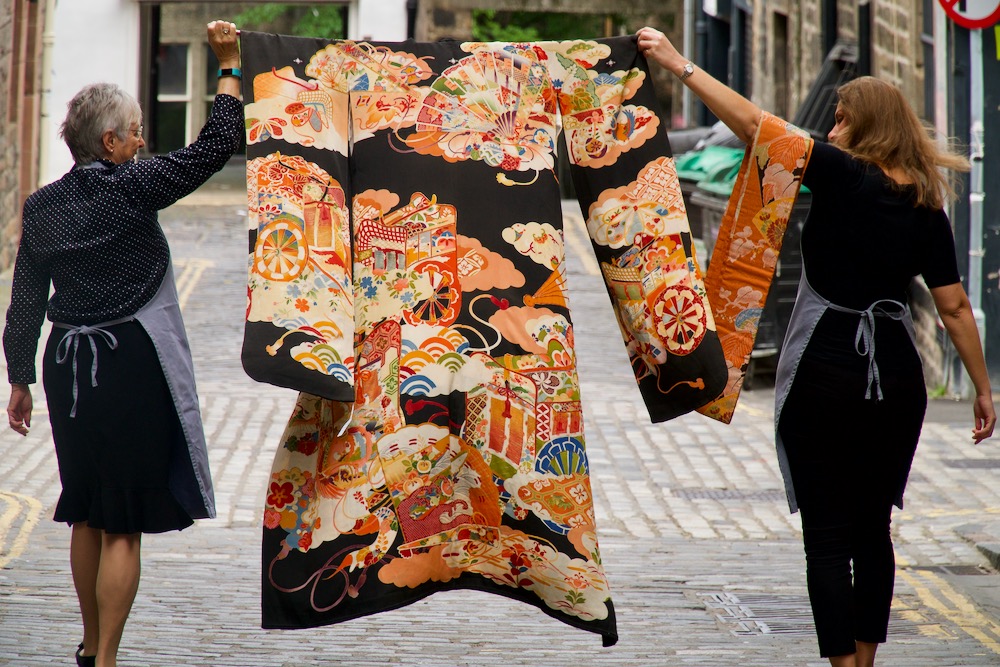 And it is full of loads of lovely Asian textiles from Japanese kimonos to Chinese tunics.

Lorna MacGregor and Charlotte Canby of Bonhams show Lot 45, one of the items to be included in the Asian Auction on 11 July 2019 at Bonhams Edinburgh showroom. This is a furisode silk kimono and obi (sash) and it is the most formal style of kimono. Made of very fine, brightly coloured silk, it is worn by young unmarried women in Japan, most commonly when celebrating Coming of Age Day the year they turn 20. Estimate: £500-700.

We are always fascinated by the amount of knowledge that the specialists at @bonhams1793 have at their fingertips. Here Asha explains the story behind a Chinese robe. Asian Art Sale is on 11 July in Edinburgh pic.twitter.com/db8GebE4Ug

“Asha I’m going to say that these are kimonos but I’m wrong aren’t I?

“Yes kimono is a Japanese term for an elaborate robe. This is a Chinese robe from the late 19th and early 20th century. It’s from the late Ching Imperial Court and the reason we know this is because it has what’s known as a mandarin rank badge or mandarin square badge on it.

“Basically the Ching Imperial Court was so over filled with people, they had to wear symbols on their chests and on their backs, so they could know what level of the hierarchy they were in – how close they were allowed to be to the Emperor or who they had to bow to and who had to bow to them.

“This one right here is for a fairly low level military official and it’s unusual that these survived because when the Ching Imperial Dynasty fell and the communists took over – first the republicans and then the communists – it was considered politically insensitive to promote your family’s prior history and the Imperial Military. So they were quite often destroyed.

“The reason we know this one is military is because we have a little Imperial Bhuddist lion here who’s growling at the sun over here and it’s beautifully done. It’s all worked in couched gold thread, so the core of silk thread is wrapped in beaten gold and because it’s not flexible enough to stitch through the fabric it’s laid on top of the fabric and it’s held in place with tiny stitches.

“So it’s a kind of line art rather than sort of sewing in the traditional sense. It’s unusual to find one in such good condition with no loose stitching or anything like that. And it wasn’t just the men who wore these. The wives were required to wear the matching set to their husbands so again whose wife to bow to and whose wife had to bow back to them.”